Next up is a little flick called “Carnosaur,” which was Roger Corman’s per-emptive answer to the blockbuster sensation of “Jurassic Park.”

“Carnosaur” was directed and written by Adam Simon (“Brain Dead,” “Salem”), with additional footage done by Darren Moloney, who later directed something called “Andromina: The Pleasure Planet.” The story was based on a novel, also called “Carnosaur,” by the Australian fantasy and science fiction writer John Brosnan. Brosnan was known for using a variety of pen names for his novels, such as Harry Adam Knight, which was used for the publication of “Carnosaur.”

The “Carnosaur” musical score was composed by Nigel Holton, who also did music for flicks like “The Haunted Sea” and “Bloodfist II.” The cinematography for “Carnosaur” was done by a man named Keith Holland, who shot a number of other low budget pictures like “Bloody Murder” and “Neon City.” The two credited editors for “Carnosaur” were Richard Gentner (“Leprechaun 2,” “Against the Law”) and Lorne Morris (“Carnosaur 2,” “Killer Instinct”).

The makeup effects work on “Carnosaur” was done by the two-person team of David Barrett (“Tank Girl,” “Batman & Robin,” “Mighty Morphin Power Rangers: The Movie”) and Fleur Morell (“Terminator: Genisys,” “Dawn of the Planet of the Apes”). Likewise, the visual effects for “Carnosaur” were provided by the duo of Alan Lasky (“Last Action Hero”) and Mark Plunkett (“Robot Jox”).

The executive producer for “Canosaur” was none other than Roger Corman, arguably the king of all b-movie producers, who had previously been behind “Humanoids from the Deep,” “Piranha,” “The Little Shop of Horrors,” “Attack of the Giant Leeches,” and countless other memorable flicks. The other credited producer was Mike Elliott, who has worked on more recent films such as “War” and “The Devil’s Rejects.”

The story of “Carnosaur” centers on a mad genetic scientist, who has managed to reproduce dinosaurs by modifying chickens. If that wasn’t frightening enough, she is also hatching a plan to replace all of humanity with her new breed of dinos, and the only people standing in her way are a hippie and a janitor.

“Carnosaur” features two different dinosaur species: the famous Tyrannosaurus Rex, and the more obscure Deinonychus, which bears significant similarities to the Velociraptors popularized by “Jurassic Park.” The production actually employed an amateur paleontologist to act as a supervisor for the creature creation, which is mildly astounding given the low quality of the picture.

Diane Ladd, who plays the key antagonist in “Carnosaur,” is interestingly the mother of Laura Dern, one of the primary players in the big-budget inspiration for the flick, “Jurassic Park.” This might have been an intentional casting choice due to the relation, but who knows?

Gener Siskel & Roger Ebert were famously split on their opinions of “Carnosaur” on “At The Movies,” with Siskel giving it a “marginal thumbs up” due to the silliness of the plot and Diane Ladd’s performance. Roger Ebert, on the other hand, gave it an unconditional thumbs down. The disagreement was even joked about in the television show, “The Critic.”

In true Roger Corman style, “Carnosaur” was reportedly shot in just 18 days, for a budget of well under $1 million. It grossed roughly $1.7 million in its theatrical run, making it a profitable little picture. That said, it certainly wasn’t well loved by critics or audiences: it currently holds a 3.4 rating on IMDb, along with Rotten Tomatoes scores of 11% (critics) and 24% (audiences). It is certainly fondly remembered by good-bad movie fans for the cheesy effects work, however.

Speaking of which, the dinosaur puppets in “Carnosaur” look really bad. In a number of sequences, it is painfully obvious that the creature is actually a hand puppet, which doesn’t exactly inspire terror. It also borders on being kind of cute at times, and never manages to pull off ‘menace’ very well. Even the large T Rex spends most of it’s time in a laser room that would fit in more suitably in a documentary on EDM, which I assume was done because it obscures the details of the puppet. There is also some lazy, POV, green-tinted ‘dino-vision’ used on and off throughout the movie, which certainly didn’t help anything.

“Carnosaur” definitely has no qualms about being a knockoff at its core, and doesn’t even limit itself to the confines of “Jurassic Park.” As with “Humanoids of the Deep,” there are a couple of unsettling monster births a la “Alien,” and there is even a “Night of the Living Dead” inspired downer ending.

The production clearly didn’t have Diane Ladd for very long (reportedly 5 days), and the way they shot her made it clear. Her character, who is portrayed as a bit of a hermit, almost exclusively interacts with other characters through security cameras. Despite the obvious awkwardness caused by this, and the fact that the film’s evil plot is more than a bit ridiculous, Diane Ladd plays her mad scientist role pretty straight. Her performance is certainly not as phoned in as I expected. However, I personally thought it was Ned Bellamy who really stole the show as an eccentric corporate figure behind the scenes, though Ladd is certainly hammy. 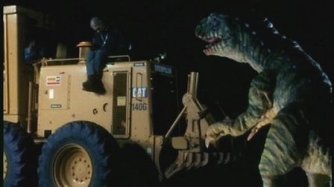 One of the things that surprisingly stood out the most for me is how absolutely awful the musical score for “Carnosaur” is. It sounds like something a middle school student put together on a cheap keyboard, and it borders on being grating throughout the film.

Overall, “Carnosaur” is worth watching for the hilarious puppet effects, but not much else. The plot is outrageous to be sure, but isn’t particularly memorable. The same can be said of the acting, which is really just on par for b-pictures. It is probably one of the more memorable Corman flicks from the 90s, and might be worth giving a shot with a group for the highlights.