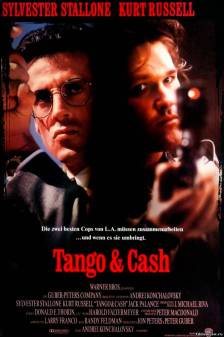 Today’s feature if one of the most notorious buddy-cop showcases of all time: Tango & Cash.

Tango & Cash was written by Randy Feldman, who also penned screenplays for the films Nowhere to Run, Metro, and Hell Night.

The final credited director for Tango & Cash was Andrei Konchalovsky (Runaway Train, Homer and Eddie, The Inner Circle), but he was actually replaced before filming was completed. Albert Magnoli (Purple Rain) took over the production, but doesn’t have an official credit on the movie. The circumstances of the director change apparently had to do with significant conflicts between Konchalovsky and producer Jon Peters over the tone of the movie, which eventually boiled over.

The initial cinematographer on Tango & Cash was Barry Sonnenfeld, who later directed movies like Wild Wild West, Get Shorty, and Men in Black. His shooting credits at the time included significant movies like Big, Throw Momma From The Train, Raising Arizona, and Blood Simple, but he was dismissed after only a brief stint on Tango & Cash because, reportedly, Stallone wanted his gone. His replacement was Donald E. Thorin, whose career credits include shooting Collision Course, The Golden Child, Purple Rain, Scent of a Woman, Undercover Blues, and Dudley Do-Right.

The film had two credited primary editors: Robert A Ferretti (Stuck, On Deadly Ground, Gymkata) and Hubert de La Bouillerie (Highlander II: The Quickening, Police Academy 5, Police Academy 6).  The film was re-edited on the orders of Warner Brothers by Stuart Baird (Superman, The Omen, Tommy), taking away control from the production team. This ultimate, studio-mandated edit by Baird and de La Bouillerie was only given partial credit, but is more responsible for the final product of the film that the scrapped Ferretti edit.

The music for Tango & Cash was provided by Harold Faltermeyer, who is most famous for his iconic theme for Beverly Hills Cop. His other credits include Fletch, Top Gun, The Running Man, and Cop Out. He has also worked extensively beyond motion pictures, and has two Grammy awards for his work.

The plot of Tango & Cash is summarized on wikipedia as follows:

The film describes the struggle of Raymond Tango and Gabriel Cash, two rival LAPD narcotics detectives, who are forced to work together after the criminal mastermind Yves Perret frames both of them for murder. 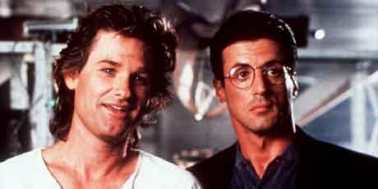 Patrick Swayze was initially cast in the role of Gabriel Cash, but dropped out to star in his own cult classic, over-the-top action flick: Road House. Kurt Russell then took over the role, and the rest is history.

The glasses worn by Sylvester Stallone throughout the movie were his own prescribed spectacles. Typically, he wears contacts for his movie roles, but he decided to wear glasses as Ray Tango to make him seem more intelligent and distinguished.

The budget for Tango & Cash was estimated to have gotten as high as $55 million by the end of the production. It managed to make the money back on a gross total of $63.4 million, but the inflated budget and low profits led most people to regard it as a bust. Critics and audiences certainly didn’t receive it warmly at the time: the movie currently holds Rotten Tomatoes aggregated scores of 34% from critics and 52% from general audiences, but the more contemporaneous IMDb rating is notably higher at a 6.3. Particularly in the past few years, the movie has been hailed as a cult classic by many, epitomizing a certain style of action movie.

Tango & Cash is arguably the peak of fun, cheesy action movies. Kurt Russell is absolutely fantastic, as he always seems to be when he is in his action element. Seeing Stallone play against type as an intellectual adds a surreal element to the film, and the surprisingly deep cast of character actors makes it one hell of an entertaining showcase for movie buffs. The plot and action are both ludicrous enough that any bad movie lover should give it a chance, but I would even go so far as to recommend it to general movie-goers nowadays. This movie encapsulates an entire genre and time period that has recently started to be ‘cool’ again, and this hilarious over the top flick deserves another round of eyes on it.

For more thoughts on the dynamic duo of Tango & Cash, I recommend checking out the dedicated episode of The Flophouse Podcast on the flick, last year’s spotlight on Flavorwire, and the retrospective review from The Dissolve.