Next up in the Larry Cohen Collection is “Manic Cop 2,” which continues Matt Cordell’s crusade for revenge against the city officials and criminals who set up his imprisonment and murder.

“Maniac Cop 2” was once again written and produced by Larry Cohen, with William Lustig also taking up the directorial reins for the sequel.

The director of photography on “Maniac Cop 2” was James Lemmo, who was one of the cinematographers from the first “Maniac Cop,” and also worked with William Lustig on “Vigilante.” 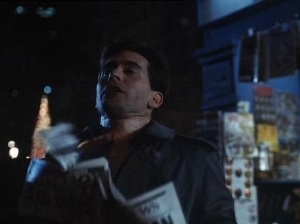 Outside of Larry Cohen, one of the other producers on “Maniac Cop 2” was John Engel, who also produced “James and the Giant Peach” and worked on the film “Cabin Boy.”

“Maniac Cop 2” was again edited by David Kern, who, in addition to “Maniac Cop,” also worked on films such as “It’s Alive III,” “Crazy In Alabama,” “Rush Hour,” “Sky High,” and “George of the Jungle.”

The score for “Maniac Cop 2” was once again provided by Jay Chattaway, who also provided music for “Maniac,” “Vigilante,” and the Steven King adaptation, “Silver Bullet.”

The story of “Maniac Cop” picks up right after the events of “Maniac Cop,” with the NYPD still not acknowledging the survival of Matt Cordell, but clearing previously accused detective Jack Forrest regardless. However, the killings continue, and another serial killer arises, preying on exotic dancers throughout the city. Against the odds, the two killers join forces against the police and the city, out for revenge and chaos.

Director Sam Raimi (“Army of Darkness,” “Spider-Man”) once again appears in a cameo role, as the well-noted and instantly-recognizable character actor Danny Trejo (“Anaconda,” “Machete,” “Breaking Wind”) in one of his first on-screen performances.

“Maniac Cop 2” currently has a 5.8 rating on IMDb, as well as Rotten Tomatoes scores of 60% (critics) and 41% (audience), which is interestingly higher than the original “Maniac Cop.”

The budget of “Maniac Cop 2” was notably higher than the original, topping off at an estimated $4 million. The movie, however, went direct to video in the United States. I wasn’t able to dig up any gross information, but given the lack of success of the first film, I would be shocked if it made a significant profit over its foreign theatrical run.

“Maniac Cop 2” received praise for its use of New York City locations and excellent practical effects, particularly the pyrotechnics in the film’s climax, which make for a significantly explosive conclusion.

William Lustig said in an interview that he considers “Maniac Cop 2” to be his best work, saying:

I do consider ‘Maniac Cop 2′ to be my best film. It was the film [where] I felt as though myself and my crew were really firing on all cylinders. And I think we made a terrific B-movie. We tried to make it a better film [than “Maniac Cop”]. Take the ideas and concepts and first and improve upon them.

“Maniac Cop 2” provides more action than the first movie, which is one of the biggest complaints I noticed people having with it. At the same time, that happens at the expense of some of the effective atmosphere of “Maniac Cop,” but only to a certain degree.

Overall, “Maniac Cop 2” is a pretty solid sequel to the original, and is far better than the typical horror sequel by far. Robert Davi is a good addition to the franchise without any doubt. However, it feels a little bit like two movies forced into one: the first segment of the film basically just wraps up the story of the first, and then it gets on to its own story. It makes the whole film feel just a little weirdly paced and off-focus.

For fans of “Maniac Cop,” Larry Cohen, or William Lustig, this is a film worth checking out. For fans of Bruce Campbell, he doesn’t appear in much of the movie, and isn’t his typical hammy self either. This isn’t a campy movie, and if you have your expectations about that straight going into it, you’ll find something to enjoy.