“Blood Diner” was written by Michael Sonye. Sonye was primarily an actor, appearing in films such as “Surf Nazis Must Die,” but wrote a handful of b-movie screenplays, including “Cold Steel” and “Star Slammer.”

“Blood Diner” was directed and produced by Jackie Kong, who only had a handful of credits in the 1980s. She was also involved in the schlocky films “Night Patrol” and “The Being.”

The cinematography for “Blood Diner” was done by Jurg V. Walther, who has worked on such (not-so) esteemed films as “Daniel Der Zauberer,” “Zombie Nation,” “Joysticks,” and “Hot Dog: The Movie.”

The music for “Blood Diner” was composed by Don Preston, who did the music for most of Jackie Kong’s films, as well as “Eye of the Tiger” and “Android.” He also interestingly provided the synthesizer work for the score to “Apocalypse Now.”

The editor on “Blood Diner” was Thomas Meshelski, who also cut such horror films as “Puppetmaster” and “TerrorVision.”

One of the executive producers for “Blood Diner” was Lawrence Kasanoff, who is best known for producing movies like “Mortal Kombat” and “Class of 1999,” but also infamously directed the animated disaster that is “Foodfight!”

Most of the cast of “Blood Diner” is made up of actors who have appeared in no other films, or at most just a handful of other similarly low-budget horror movies. Usually movies like this seem to have one or two players who eventually found some form of success, but that isn’t the case here. 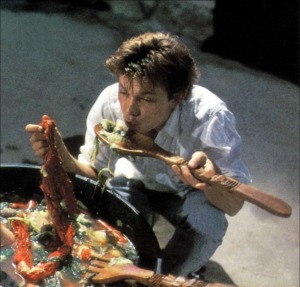 The story of “Blood Diner” centers around two cannibal brothers who co-own and operate a diner. They plan to resurrect an ancient God with a massive blood sacrifice, under the guidance of their newly resurrected undead uncle. Their preparations (namely the mass killings) attract attention from the police, who race against the clock to foil their plans.

The reception for “Blood Diner” was unsurprisingly negative, though not as poor as one might expect. It currently holds a rating of 5.0 on IMDb, along with a 53% audience score on Rotten Tomatoes.

“Blood Diner” was apparently initially intended as a sequel to Herschell Gordon Lewis’s “Blood Feast,” but the idea was scrapped before filming commenced. However, the plot similarities certainly remain for the sake of homage and parody.

A few parts of “Blood Diner” play for genuine laughs, such as the opening radio interruption warning listeners about an escaped killer in the area. However, most of the comedy feels added in after the fact, like this was meant to be serious horror, but half way through they realized how ridiculous it all was and tried to laugh off their incompetence. The result is a quasi-parody that rides the line between mocking and truly becoming the thing it is trying to make fun of. The humor is also pretty lazy on the whole, like it was concocted on the fly by people who don’t make a living in comedy.

Something else that can’t be ignored about “Blood Diner” is the musical score, which is the deadly combination of being both really terrible and extremely loud. The sound editing is straight horrendous, to the point that the music manages to overpower the outlandish acting on screen at times (or at least that was the case on my copy).

Speaking of which, ‘hammy’ doesn’t even begin to describe the acting in “Blood Diner.” Everyone seems to be over the top in one way or another, like all of the characters are trying to out-weird or act over each other. There is also some god-awful child acting in the introduction sequence that ranks up there with some of the worst that I have ever seen.

If there is anything positive to say about “Blood Diner,” it is that the cast of characters is certainly colorful, and makes for an odd and surreal world for the story to take place in. One of the key accessory characters, for instance, is a rival diner owner who is also a compulsive ventriloquist. There is also a group of explicitly vegetarian cheerleaders, a Hitler-themed professional wrestler, a talking undead brain, and a popular craze of nude aerobics.

One thing I still don’t understand about the plot is why the brothers pretend that their cannibalistic product is vegetarian, apart from the fact that it seems to be a popular fad in the world of the movie. It just strikes me as a little too easy of a ruse to spot, and they couldn’t possibly keep it up for too long for logistical reasons alone.

The God-raising ritual itself (the “blood buffet”) is the most bizarre section of the film by far. The Frankenstein-ish patchwork vessel for the deity is genuinely unsettling and bizarre, and the entire sequence plays like an intense fever dream. The nightclub setting is pretty much perfect for the finale, and the awful music is up to 11 throughout the whole sequence. The film is probably worth watching for that alone, because it is a spectacle of awfulness.

Overall, “Blood Diner” is a damn strange movie. As I said before, it rides a line between being parody and an earnestly terrible film, which makes it all the more intriguing to watch. How many of these moments were meant to be funny? Were they meant to be funny in the way that they are funny? The finale sequence alone makes it worth the watch for bad movie lovers, but I’m not totally sure how casual movie goers would react to it. It certainly isn’t dull, and has a lot of gore and ridiculousness to go around, but it also doesn’t quite have the same charm of the bad movie “classics” that everyone loves, which I think is because of the elements of intentional humor within it. If you are looking for a deep cut for a bad movie night, this could make an interesting pick. Better yet, it is entirely available on YouTube.