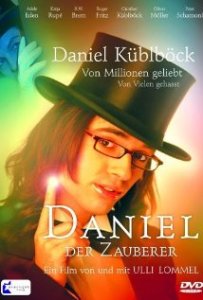 Ulli Lommel is one of those rare filmmakers who seems to be able to do no right. I honestly can’t think of any other filmmaker who so thoroughly embodies the legendary incompetence of Ed Wood for today’s film world. Some time ago, I covered his film “Zombie Nation”. As bad as that film is, it is a masterpiece in comparison to Lommel’s infamous part-documentary, part-fever dream known as “Daniel – der Zauberer”, which is widely considered to be the worst German movie of all time.

“Daniel der Zauberer” is a thoroughly fictionalized tale centering around the inexplicable German pop sensation Daniel Kublbock, who gained notoriety after winning Germany’s equivalent of American Idol. Speaking of which, this movie makes “From Justin to Kelly” look like a narrative masterpiece and in-depth character study.

In the world of “der Zauberer”, Daniel Kublbock is not just a pop star, but is also a wizard in training under the tutelage of his long-deceased grandfather (played by Lommel himself). In addition, he is apparently such a divisive figure in German society that a number of teenagers feel so much ire for him and his music that they wish to see him die. A good deal of the plot centers around a couple of these disgruntled youths attempting to assassinate Daniel, and that is unbelievably one of the less ludicrous aspects of the movie. Daniel ultimately wins over his would-be assassins and all of his other passionate detractors with his positive energy and friendliness by the time the movie ends, which is particularly notable given how painfully awkward Daniel is in front of a camera. Frankly, Daniel wouldn’t be able to win over a puppy with his charm and charisma.

For “Daniel – der Zauberer”, the devil is definitely in the details. All of the things that are typically invisible in well-crafted movies stand out like swollen thumbs here. The cinematography is on par with an amateur home video, the editing and sound are painfully distracting, and one continuity error is even so blatant that there is a half-hearted attempt to write it into the movie (Ulli Lommel’s character has a disappearing and reappearing arm).

The writing is really unfocused and vague throughout the movie, and fails to establish important elements to the story for the audience: most notably, it is not made absolutely clear that Daniel is a wizard in training until the last act, and his relation to Ulli Lommel’s character isn’t covered until the film’s conclusion. The dialogue isn’t much better, but it is hard to tell whether the writing or the acting is more to blame for what ultimately makes it on screen. Either way, the result is nothing short of abysmal.

There are a number of directorial decisions in this movie that truly boggle my mind. In a number of scenes, archival footage from various reality show appearances by Daniel are spliced in for seemingly no reason at all. I can understand the extensive use of concert footage in the movie given it more or less ties into the character, but the reality show clips just don’t make any sense at all. One of these sequences takes place while Daniel is having a nightmare where a mysterious man slowly approaches Daniel with a knife while he is sleeping. During the sequence, clips of Daniel on a German version of “Fear Factor” are cut in seemingly at random. Without provocation, the screen flashes to Daniel covered in bugs on what is clearly a reality show setup. In a more baffling sequence, footage is shown of Daniel playing with a couple of baby tigers, intercut with him…not really doing anything at all. He is just kind of standing around.

I am on the fence about whether I can recommend “Daniel – der Zauberer”. Part of me wants to say that this is a movie so incompetently made that it has to be seen to be believed. At this point, even Daniel Kublbock has admitted that it is truly awful, and that has to mean something from someone whose career is built on spreading positive energy. However, it is also a pretty boring experience to sit through, and given it didn’t get a release in English, the necessity of digging up the fan-made subtitles means that you have to go a bit out of your way to watch it. If you have a handy copy, give it a watch. I would just say do it with the caveat that it isn’t going to be a fun experience. This isn’t a movie for a group of people to watch and enjoy ironically, it is a movie that must be suffered individually, like a ritual.