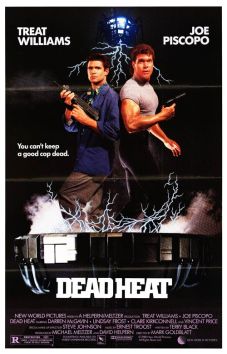 The director for “Dead Heat” was Mark Goldblatt, an accomplished editor for such films as “Super Mario Bros.,” “Enter The Ninja,” “Predator 2,” and “Humanoids from the Deep.” His only other directorial credit came the following year with 1989’s “The Punisher,” starring action icon Dolph Lundgren.

“Dead Heat” was written by Terry Black, and it was interestingly the only film writing job in his career. However, he is the brother of Shane Black, who is well known for his action movies “Lethal Weapon,” “Last Action Hero,” and “Kiss Kiss Bang Bang.”

The cinematographer for “Dead Heat” was Robert D. Yeoman, who has also shot such films as “The Wizard,” “Moonrise Kingdom,” and “Whip It,” among many others.

The makeup  effects on “Dead Heat” were done by the XFX effects group, for which “Dead Heat” was their first film. The group went on to work on films like “The Abyss,” “Species,” “The Dentist,” and “Zoolander.” The company’s founder and primary effects designer was Steve Johnson, who earlier worked on “Humanoids from the Deep,” “Videodrome,” and “An American Werewolf In London.” The rest of the team included Craig Caton (“Leviathan,” “The Stuff,” “Predator 2”), Gunnar Ferdinandsen (“Total Recall,” “RoboCop 3”), William Forsche (“Dolls,” “From Beyond,” “Beetlejuice”), Steve Frakes (“Leviathan,” “Hollow Man,” “Darkman”), Chris Goehe (“Howard The Duck,” “Ghostbusters II”), and Russell Seifert (“Leviathan,” “The Garbage Pail Kids Movie”). 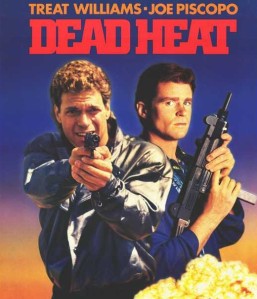 The visual effects crew for “Dead Heat” was made up of Ernest D. Farino (“Cyborg,” “The Terminator,” “The Thing”) and XFX’s Steve Johnson (“Humanoids from the Deep,” “The Cat in The Hat,” “League of Extraordinary Gentlemen,” “Big Trouble In Little China”), who took on multiple effects effects roles for the flick.

“Dead Heat” was edited by Harvey Rosenstock, who cut such flicks as “Scent of A Woman,” “Tombstone,” “Radio,” and the Robin Williams remake of “Flubber.”

The producers for “Dead Heat” included David Helpern (“Leave It To Beaver”), Michael Meltzer (“Sometimes They Come Back…Again,” “The Hidden”), and Allen Alsobrook (“Repo Man,” “The Sword and The Sorcerer”).

The story of “Dead Heat” is a traditional buddy cop formula, with a twist inspired from a classic film noir (“D.O.A.”). Basically, an ace cop is killed in the line of duty, and then resurrected by a mysterious machine. His body is going to decompose in a matter of hours, so he has to find his killers before he deteriorates into zombie goo, with the help of his obnoxious partner and a questionable femme fatale.

The original written ending for “Dead Heat” was very similar to Terry Gilliam’s “Brazil,” in that it is revealed that the finale is entirely occurring within Treat’s rapidly decomposing imagination. While the final ending isn’t exactly upbeat, it is almost certainly more audience-friendly than the “Brazil” treatment originally planned.

Speaking of which, the ending was hardly the only aspect of the film that failed to make the final cut. According to the DVD commentary, the film had to be re-cut 9 times to satisfy the MPAA before they were able to avoid an NC-17 rating, which left a significant amount of gore and effects work unused. While a restored version was at one point planned for the home video release, it did not ultimately happen. One of these cuts features the b-movie icon Dick Miller (“Gremlins,” “Chopping Mall,” “A Bucket of Blood”), who appears briefly as a night watchman in the cemetery.

Apparently a sequel to “Dead Heat” was at one point planned. However, a writer’s strike provided a death nail after the film had already failed to be significantly profitable. In the DVD commentary, Black revealed that his loose sequel plan included a scene with a self-autopsy, and a proposed tag line of: “This time, they are even more dead!” One of the biggest issues in writing the draft, Black explained, was obviously the fact that (spoilers) all of the characters are dead at the end of “Dead Heat.” A studio executive pointed out to Black that this wasn’t really much of an impediment for a movie plot centering on a resurrection machine, which is admittedly a fair point.

One of the biggest complaints I have heard about “Dead Heat” is the presence of Joe Piscopo, who is near-universally reviled as a comedic actor. Interestingly, according to the creative team featured on the DVD commentary, New World Pictures wouldn’t make the movie without Piscopo being involved in a central role, for whatever reason that might have been.

The plot of “Dead Heat” was influenced heavily by a classic noir film, “D.O.A.” A clip from the movie appears in the background of one scene, specifically the memorable revenge climax. The plot of “D.O.A.” follows a man who has been poisoned, and only has a few hours to live. He uses his time to track down his killer, and enact revenge on his own behalf, much like the events in “Dead Heat.”

The reception to “Dead Heat” was not particularly positive: it has accrued a 6.0 score on IMDb, along with Rotten Tomatoes ratings of 13% (critics) and 50% (audience). However, it is certainly remembered as one of the stranger entries into the “buddy cop” genre.

“Dead Heat” was made on a budget just shy of  $6 million, but ultimately grossed less than $4 million in it’s domestic release, failing to make a profit.

Of all of the problems with “Dead Heat,” Piscopo is undoubtedly at the top of the list. His persona and character are unbearable, and all of comedic moments and punch lines feel forced. He mostly seems to serve to distract from the story at hand, and is so unessential that he disappears for a significant portion of the film, suffering an off-screen demise.

Unfortunately, in a movie that should be able to rely on visual work, the effects don’t look good at all in “Dead Heat.” Part of this problem is due to the decision to film primarily during the day, which instantly makes the makeup less intimidating. However, that isn’t where the problems end. The makeup is overdone at parts (particularly on Treat’s face), and continuity gets to be a big problem when primary characters can’t heal, and bullet holes start to inexplicably disappear. Worse, computer effects are used for some heavier melting effects, which look just awful now. I’m not sure if the effects cuts made for the MPAA actually hurt or helped the movie, because what made the cut doesn’t look great. 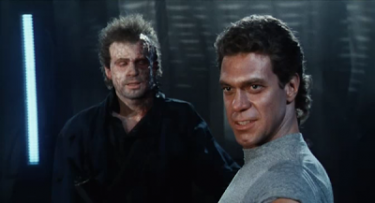 Speaking of which, it is evident from watching the film that it was heavily cut for the ratings board. There are numerous instances where reactions shots are shown to things the audience doesn’t get to see, to the point that the changes are jarring and obvious.

The elderly Vincent Price’s role in the film is minimal, unfortunately. When he does appear, he sells his role just fine. However, his character doesn’t make any sense. Why exactly did he leave the code implicating the ‘body doc’ if he was never buried, and was involved in the conspiracy? If it wasn’t him that left the code, why did the random corpse know that much about the coroner to be able to identify him by his license plate? I’m wondering if this is due to the “Brazil” ending getting axed, leading to the finale being tacked on after that original version got vetoed. It is mentioned in the DVD commentary that Vincent Price’s monologue in this finale was written by a studio executive, which struck me as a bit suspicious, and may support this theory.

On a related note, the ending to “Dead Heat” feels oddly rushed, and characters suddenly die throughout the last third of the movie, including two central cast members off-screen. I’d be interested to know to what extent the story had to be fiddled with before filming, because it feels increasingly choppy as the story progresses.

The highlight of “Dead Heat” is undoubtedly a sequence in which an entire Chinese butcher shop is resurrected, sparking one of the strangest fight scenes that I have ever seen in a movie.

Overall, “Dead Heat” is a flawed flick with a handful of highlights that make it worth watching through in my opinion. If Piscopo had been recast and some of the MPAA cuts avoided, this may very well have become a classic. However, it is what it is. The butcher shop scene should sell it for most horror fans.