Next up in the Larry Cohen Spotlight is perhaps my favorite of all of his films: the campy consumerism satire, “The Stuff.”

The cinematography on “The Stuff” was provided by Paul Glickman, who also acted as director of photography on Larry Cohen movies “God Told Me To” and “Special Effects.” 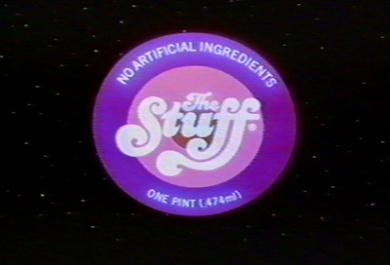 The stunt coordinator on “The Stuff” was Jery Hewitt, who has worked on a diversity of films such as “The Big Lebowski,” “Fargo,” “Christmas Evil,” “Michael Clayton,” “No Country For Old Men,” and “Cop Out.”

The story of “The Stuff” surrounds a mysterious dessert that takes the consumer world by storm, thus throwing the established dessert industry into a panic. They collectively hire a former intelligence agent named Mo Rutherford to investigate the product and discover the secret recipe via corporate espionage. As the covert investigation proceeds, however, “The Stuff” becomes increasingly eerie, suspicious, and dangerous. After a series of team-ups with a disgruntled mascot, a paramilitary organization, and an orphaned child, Rutherford decides to take The Stuff head on.

“The Stuff” features some really interesting effects work, including a bedroom attack by the stuff that pays homage to “A Nightmare On Elm Street,” even using the exact same effects room for the shot.

The Stuff itself was made up of an assortment of materials depending on the scene: ice cream, yogurt, fire extinguishing foam, and a wretched fish bone-meal concoction were all used at one point or another, and some of the shots are even superimposed animation. 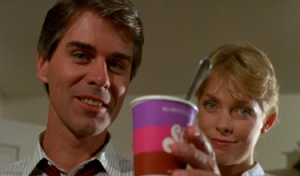 There was an extensive copyright dispute over the effects used in “The Stuff,” which led to a lengthy legal battle (Effects Associates, Inc v Cohen) that set significant precedence for the ownership of effects work done for films, and is actually a pretty interesting read for anyone with a cursory interest in copyright law.

The reception for “The Stuff” was somewhat mixed: it currently holds Rotten Tomatoes scores of 70% (critics) and 45% (audience), with an IMDb rating of 5.9. “The Stuff” was made on a $1.7 million budget, and received only a limited theatrical release with an undisclosed total gross. However, it has certainly become a cult classic thanks to effects, acting, and bizarrely humorous plot.

As with many of Cohen’s films, “The Stuff” provides a significant element of social commentary, particularly about consumerism and the food industry. There is even a specific call-out in the dialogue about the fact that the recipe for Coca-Cola is kept secret, and no one seems to care. 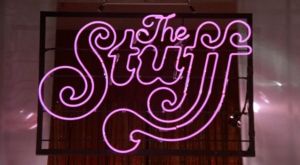 The effects work on “The Stuff” is often mocked for its ridiculousness, but I actually though that it was pretty impressive work given the low budget on the film. Sure, it is definitely squibby and cheesy, but it certainly got the job done on budget. Apart from some dated super-imposed effects, the film still looks pretty good, thanks in large part to the extensive use of practical effects.

The performances in “The Stuff” are distinctly and astoundingly over the top, particularly on the parts of Moriarty, Sorvino, and Morris. I absolutely adore Moriarty’s southern-fried pseudo-buffoon ex-intelligence agent, and even the child actor gets to go over the top with his infamous grocery store freak-out:

Overall, “The Stuff” is probably one of my favorite films, and is just about the pinnacle of what a good-bad movie can be. The performances, effects, and writing are all spot on, and create what is almost a Platonic ideal of a b-movie. It should go without saying, but “The Stuff” is a solid recommend from me for just about everyone. It is clever, funny, sharp, goofy, and just the right amount of gory.