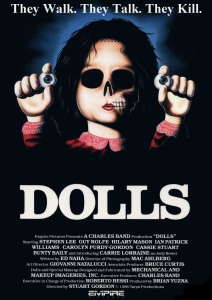 Today, I’m starting a series of posts spotlighting the career of acclaimed horror writer/director Stuart Gordon, and the many cult classic films he has produced. Arbitrarily, I have chosen to kick off this celebration with 1987’s “Dolls.”

Stuart Gordon directed “Dolls” on the order of Charles Band, who was executive producing Gordon’s next planned feature: an H.P. Lovecraft adaptation called “From Beyond,” which was to be Gordon’s follow-up to the hit “Re-Animator.” Charles Band is now best known for a number of horror franchises that clearly drew inspiration from “Dolls”: “Puppet Master,” “Demonic Toys,” and “Dollman,” but Band has been a prolific B-movie writer and producer since the late 1970s.

In true Corman-esque fashion, Charles Band proposed that Stuart Gordon could direct “Dolls” on the same sets that had already been arranged in Italy for “From Beyond,” thus saving the production a significant amount of money. After reading the Ed Naha penned screenplay, Gordon agreed to the arrangement, and made “Dolls” and “From Beyond” back-to-back on the same sets.

Ed Naha, at the time of writing “Dolls,” only had a small handful of writing credits under his belt. The previous year, Charles Band was a driving force behind getting “Troll,” a now-infamous film which Naha wrote, to the screen. Before that, Naha only had two writing credits on a couple of unnotable Roger Corman movies. Since 1987, Naha has continued writing on B-movies, including films like “CHUD II” and “Omega Doom.” He later worked with Stuart Gordon again on “Honey, I Shrunk The Kids!,” and reunited with Band on a number of films, including “Dollman” and “Dollman vs Demonic Toys.”

Ed Naha has cited the 1944 horror film “Curse of the Cat People” (the sequel to the 1942 horror classic “Cat People”) as one of the biggest influences on the screenplay for “Dolls.” Specifically, the idea of using the point-of-view of a scared child, who easily sees evil and shapes in shadows, is a borrowed mechanic from that film. Of course, where the “Cat People” movies tend to toy with the question of whether the supernatural threat is real or imagined, there isn’t a whole lot of room for doubt in the “Dolls” screenplay.

According to Ed Naha, he wrote the entire screenplay for “Dolls” based on a single concept image given to him by Charles Band, which was later re-purposed for the poster: an eerie humanoid doll holding its detached, realistic eyeballs in its hands. The image is even incorporated briefly into the film, when the audience is first presented with a victim who has been “dolled up.” 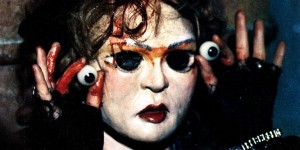 “Dolls” notably features as a producer Brian Yuzna, a frequent collaborator with Stuart Gordon who would later go on to direct “The Dentist,” “Bride of Re-Animator,” and “Beyond Re-Animator.”

“Dolls” is an interesting horror movie that borrows many elements from classical fairy tales (specifically, as Gordon has mentioned, from “Hansel & Gretel”). While it is as dark as most horror films you will find from the era, it also has a distinct element of whimsy, as well as moments of genuinely humor (which isn’t particularly unusual for Gordon movies). Stuart Gordon claims to have spent an extensive amount of time reading about fairy tales, including the book “The Uses of Enchantment” by Bruno Bettleheim, while working on the film. Gordon also still had young children at the time he was making “Dolls,” which may have somewhat inspired the tone and direction of the movie.

The story of “Dolls” follows a young child, her father, and her wicked stepmother as they become stranded on a remote road, and seek shelter in a seemingly abandoned house. They find the house to be occupied by an eccentric elderly couple who specialize in making toys, and things quickly begin to go awry from there.

The cast of “Dolls” has some definite ups and downs. Stephen Lee manages to add some decent comic relief as a “young at heart” stranded hitch-hiker who befriends the young girl, while Guy Rolfe delivers a simultaneously menacing and warm performance as Mr. Hartwicke, the designer of the enchanted dolls. Even Carolyn Gordon-Purdy, Stuart Gordon’s wife, plays a fantastically over-the-top Cruella De Vil inspired evil step-mother.

On the flip side, I absolutely cannot stand the child actor protagonist in “Dolls.” The actress, Carrie Lorraine, has unsurprisingly not done any acting work since. Her casting was primarily done because of her appearance (cute, younger than her age, believably average) according to Stuart Gordon, and she certainly fits the part from that perspective. Her line reading, however, is just awful. Luckily, the off-kilter light-heartedness of this horror movie offsets her inabilities, and she comes off as just another piece of the quirky, creepy atmosphere.

Something that I definitely appreciate about “Dolls” is that it plays on a latent fear that many people have. The idea of toys coming to life while you weren’t looking, particularly in the pre “Toy Story” days, was genuinely frightening to many people. It also doesn’t help that antique dolls are almost always extremely creepy, so it is hard to blame people for the fear. My mother used to have a collection of antique dolls on display, and that had the potential to be down-right terrifying under the right circumstances.

The effects for “Dolls” are generally pretty good, particularly given the low budget of the production. There is hybrid use of stop motion, marionettes, and traditional makeup effects for the various doll shots, which can be slightly jarring from sequence to sequence. Overall, however, the dolls still come off as plenty creepy, particularly as they are destroyed: revealing human flesh and blood underneath the toy outer skins. In particular, there is one climactic scene (a transformation) which manages to showcase the good and the bad of the effects work. Predictably, the practical aspects of the sequence are superb, but the one moment of computer assisted “shrinkage” has aged very poorly, and might take a viewer today out of the moment.

Outside of some really uncomfortable child abuse, “Dolls” is a great, fun movie that absolutely lives up to the Stuart Gordon tradition. He has a knack for creating enjoyable B-horror movies that defy the label of “bad,” despite their low quality and often tongue-in-cheek style. Stuart Gordon movies are always bloody, squibby, and cheesy, but they are also almost guaranteed to be fun to watch.

As with most of the Stuart Gordon movies I am going to cover, “Dolls” is an absolute recommend for any b-movie fans. Gordon is a consistent producer of entertaining b-level films, and “Dolls” certainly isn’t an exception. If nothing else, I would recommend anyone to watch the infamous “teddy bear scene” from this movie, particularly if it is free of context. The toy soldier death is also worth looking up, but the teddy bear scene is the crown jewel.