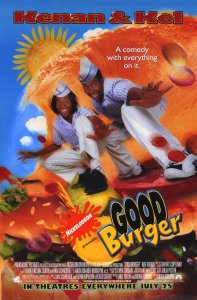 Good Burger was co-written and co-produced by the trio of Dan Schneider, Kevin Kopelow, and Heath Seifert, who have worked on a variety of television shows over the years, including Kenan & Kel, All That, KaBlam!, and Singled Out. Schneider in particular is also responsible for creating a number of other hit children’s programs, such as iCarly and Drake & Josh.

Good Burger was directed and produced by Brian Robbins, who previously did directing work on the sitcom Kenan & Kel, and has since helmed a number of Eddie Murphy vehicles, namely A Thousand Words, Meet Dave, and Norbit. His other credits include The Shaggy Dog, Hard Ball, Ready To Rumble, and The Perfect Score. He is also at least partially responsible for bringing Thompson and Mitchell into the public eye through creating the children-focused sketch comedy show All That, which provided their initial platform.

The cinematographer on Good Burger was Mac Ahlberg, who shot a huge number of b-movies over his career, and frequently worked with cult favorite director Stuart Gordon. His cinematography credits include Re-Animator, Evil Bong, King of the Ants, Space Truckers, The Wonderful Ice Cream Suit, The Brady Bunch Movie, Robot Jox, Arena, DeepStar Six, Dolls, From Beyond, House, and House II: The Second Story, among many, many others.

The musical score for the movie was composed by Stewart Copeland, whose other film credits include Wall Street, Talk Radio Rumble Fish, Men At Work, Highlander II, Surviving The Game, The Pallbearer, She’s All That, Very Bad Things, and Boys & Girls, among others.

The cast of Good Burger is made up primarily by Kenan Thompson (Saturday Night Live, Fat Albert, Stan Helsing, Master of Disguise), Kel Mitchell (Mystery Men, All That), Sinbad (Jingle All The Way, Houseguest, First Kid), and the recently deceased Abe Vigoda (The Godfather, North), with a handful of other regular players from All That filling in accessory roles.

The plot of Good Burger is summarized on IMDb as follows:

Two dim-witted teenage boys, are forced to save the fast-food restaurant they work at from going out of business, despite a new-and-improved burger joint opening across the street that want to be the “Top Dog” in the fast food industry.

Good Burger was adapted from a popular recurring sketch from the Nickelodeon ensemble comedy show All That, which prominently featured both Kenan Thompson and Kel Mitchell. The duo’s popularity was all over Nickelodeon’s programming for a number of years, as they also co-hosted a popular sitcom on the network called Kenan & Kel.

In September of 2015, Kenan and Kel reunited for another Good Burger sketch on The Tonight Show with Jimmy Fallon, to the delight of many of their long time fans. Kel has recently featured on a handful of Nickelodeon produced shows in the last few years (primarily as a voice actor), while Kenan has been a regular cast member on NBC’s lauded sketch comedy flagship, Saturday Night Live, for many years. However, their paths have rarely crossed.

Good Burger was made on a relatively low budget of $9 million, on which it grossed $23.7 million in its theatrical run. Currently, it holds an IMDb user rating of 5.6, along with Rotten Tomatoes aggregate scores of 32% from critics and 63% from audiences.

Good Burger is packed pretty tight with every variety of juvenile humor, which makes sense given it was clearly geared towards children. Interestingly, I still think the final product is more dignified and generally funny than your average Adam Sandler movie, thanks to a handful of moments of clever wordplay that stand out from the rest of the physical gags. That said, audiences today would have to rely on nostalgia to enjoy it, as it was clearly designed solely to appeal to an existing fan base, and is thus very loosely plotted, and clearly had very little effort put into it.

A lot of critics give children’s movies a pass for no reason other than their demographic, which is a policy that has never sat well with me. Even Roger Ebert opened his review of Good Burger with the following statement:

“Good Burger” was not made for me, and if I say I didn’t much enjoy it, that wouldn’t be useful information.

Personally, I understand the logic behind having a different standard for children’s movies, but I think the result of that policy over time is that entertainment for kids is now held to virtually no standard at all. Most movies that are catered to kids now amount at an amalgam of color and noise, with the exception of the occasional articulate works from Pixar or laudable foreign animated features. If critics don’t put forth the effort to pan things like The Nut Job or the countless Alvin & The Chipmunks “squeakquels,” then there isn’t a whole lot of incentive to try to make children’s movies any better in the future. So, in this case, I appreciate Gene Siskel’s take on Good Burger, which is notably more brutal than Ebert’s, which can be seen below.

I can’t talk anyone out of having positive feelings of nostalgia for movies like Space Jam or Good Burger, but I have to say, Good Burger is honestly pretty terrible. It was clear to me on this rewatch how lazy most of the gags were, how uncomfortable all of the kids were acting outside of a sketch scenario, and how paper thin the concept for this movie was to begin with. Good Burger isn’t as wretched as something like Chairman of the Board or any of Happy Madison’s more recent comedic features, but it reeks of being amateurish and poorly crafted. If you have positive memories of Good Burger at all, you should absolutely not seek it out today. It has aged about as well as raw ground beef.