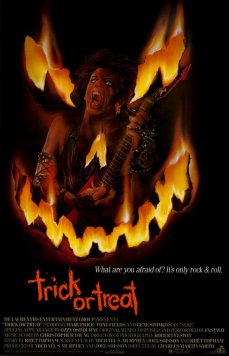 Today’s feature, in the spirit of the Halloween season, is 1986’s Trick or Treat.

The director on Trick or Treat was character actor Charles Martin Smith, who has appeared in such movies as The Untouchables and Starman. His other directing credits have included Air Bud, Dolphin Tale, and Dolphin Tale 2.

The cinematographer for the movie was Robert Elswit, who has shot such acclaimed films as Nightcrawler, There Will Be Blood,  and The Town, as well as less acclaimed flicks like Gigli and 8MM.

The editor for Trick or Treat was Jane Jaffe, who was an assistant editor on films like Pretty In Pink, Terms of Endearment, St. Elmo’s Fire, and The Adventures of Buckaroo Banzai Across The 8th Dimension. 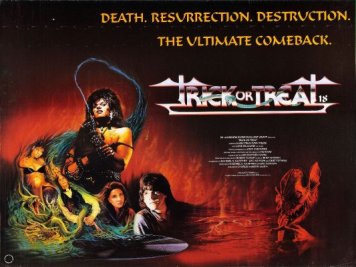 The music for the movie was provided by Christopher Young, who has provided scores to such movies as Swordfish, Sinister, Priest, The Core, and Hellraiser over his career.

Trick or Treat was produced by co-writers Michael S. Murphey (From Dusk Till Dawn 2, From Dusk Till Dawn 3, A Nightmare On Elm Street 2) and Joel Soisson (Maniac Cop 3, The Prophecy, Dracula 2000), along with Scott White (Gotham). 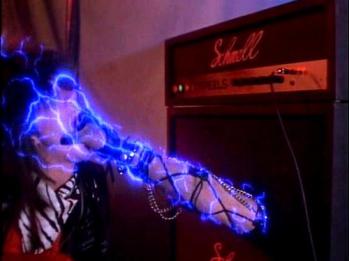 The story of Trick or Treat centers around a outcast high schooler with a deep love for metal music, whose musical idol is killed in an apparent hotel fire. After the rocker’s death, his last recording winds up in the hands of his biggest fan. However, this final release proves to be more than a standard album, and the young fan starts having strange visions and dreams after listening to it.

The songs used for the movie were provided by the band “Fastway,” which was made up of Dave King of Flogging Molly and Eddie Clarke of Motorhead.

Glen Morgan, a now-prolific Hollywood producer of such movies as Final Destination, Black Christmas, and Willard, appears in his only on-screen acting role in this movie.

Trick or Treat now has a bit of a cult following based on its outlandish plot, soundtrack, and rock star casting. This is in spite of the film not receiving a new video release in a number of years, reportedly due to rights issues with the music included in the soundtrack. Currently, it hols a 5.7 rating on IMDb, along with a Rotten Tomatoes score of 63% from aggregated audience reviews. 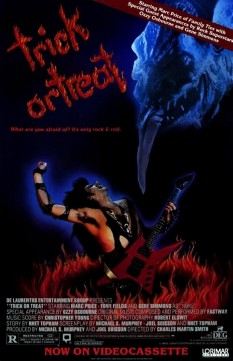 Trick or Treat capitalizes on the widespread fear of the rebellious influence of rock and roll on the youth of the United States, which was the loathed genre of choice of middle class parents prior to the rise of rap and hip hop as the new musical social pariahs. The inclusion of Gene Simmons and Ozzie Osbourne in the cast was clearly designed as a nod to their own penchants for controversy, not unlike the fictional rock star at the center of the film. Both men, on top of releasing controversial rock music, were known for their wild concert exhibitions, and were thus the ire of many religious zealots and puritanical social critics.

I don’t think that this movie was ever meant to be taken particularly seriously as a horror flick. The film makes it pretty clear that the idea of rock music inspiring violence and misbehavior is ridiculous, and the plot seems to mock the ludicrousness of the concept. Basically, the film takes the position that the only way that music could cause teens to commit crimes is if they were possessed by evil ghosts of metal gods. That said, the comedic elements aren’t explicitly laid out, and there aren’t any jokes to speak of, so it defies being labeled a comedy. I can’t help but wonder if this could have been a really hilarious horror/comedy movie if they had been willing to lean into the comedic elements a little harder. Alas, the movie sits in a no-man’s-land between being funny and scary, and never really finds a good balance.

The effects work in the movie is surprisingly interesting and strange, and goes in directions that I did not at all expect or predict going into it. I thought that this would be a pretty simple possession deal, but there are some proper monstrous shenanigans in this flick, which is certainly a memorable aspect to the movie. I also think Wes Craven took some notes from this movie when he was working on Shocker, as there are a few notable similarities with that flick, particularly in regards to the villain.

Overall, Trick or Treat is a case where the concept was way better on paper than the execution wound up being on screen, which is a real shame. It is still worth seeing for the novelty value and a few highlight moments, particularly for anyone looking for a 1980s metal nostalgia trip. But, because it isn’t particularly easy to get a hold of, it may take more effort than it is worth to dig up a copy. That said, it isn’t impossible to find online if you do some searching for it.

6 thoughts on “Trick or Treat”