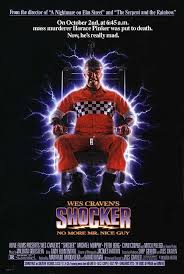 Today’s feature is one of the popularly-regarded missteps in the storied career of the late Wes Craven: 1989’s Shocker.

Shocker was written, directed, and produced by the late Wes Craven, who was famously behind movies like Scream, The Last House On The Left, A Nightmare On Elm Street, and The Hills Have Eyes.

The cinematographer for the film was Jacques Haitkin, who is best known for shooting such horror features as Wishmaster, Maniac Cop 3, Evolver, The Ambulance, A Nightmare On Elm Street, and Galaxy of Terror. The editor for Shocker was Andy Blumenthal, who also cut the films Waiting…, Waiting For Guffman, and Five Corners. 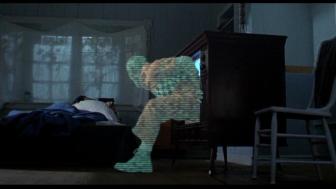 The music for Shocker was provided by the combination of rock star Alice Cooper, band-mate Michael Owen Bruce, and William Goldstein (Fame).

Reportedly, it took Shocker 13 submissions to the MPAA rating board, each with new cuts, in order to get an ‘R’ rating instead of an ‘X’, which would have made wide distribution to theaters nearly impossible. 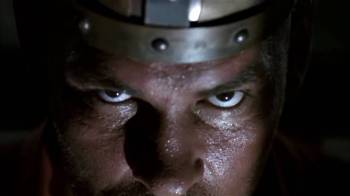 Shocker was designed to be the beginning of a franchise, but it didn’t ultimately make enough money to justify further installments. That said, it was a profitable feature: in total, it grossed roughly $16.6 million in its domestic theatrical release, on a budget of $5 million.

Despite the positive gross, the film was poorly received by both critics and audiences: it currently holds a 5.4 rating on IMDb, alongside Rotten Tomatoes scores of 12% from critics and 30% from audiences.

The first thing that is painfully evident watching Shocker today is that the visual effects (particularly the various ghost and electric effects) have not aged particularly well over the years. I’m sure they looked perfectly passable at the time, but now it is a bit distracting and jarring to see cartoonish lightning bolts pop up in every other scene.

The villain of the film, played primarily by Mitch Pilleggi, is way over the top, and chews up the scenery in every scene he appears in. However, because of the nature of his power, he isn’t actually on screen a whole lot, which is a real shame given how entertaining he is.

In general, Shocker looks and feels a little too similar to the later incarnations of A Nightmare On Elm Street, with lots of one-liners thrown about and the surreal dread put on the backburner. Pilleggi seems like he is doing an impression of Kruger throughout the film, which doesn’t help with the existing parallels of an ethereal undead serial killer villain. As entertaining as he is, Pilleggi isn’t Robert Englund.

Overall, Shocker is plenty of fun as a cheesy horror movie, with acting and effects that are well over the top. However, it lacks Wes Craven’s typical vision and style, which made him one of the most lauded figures in the genre. It is worth checking out for its entertainment value, but it is a bit disappointing as a work from Craven.