While Wes Craven was given a character credit on the movie, the screenplay for A Nightmare On Elm Street 2 was provided by one David Chaskin, who also wrote The Curse and I, Madman.

The director for Freddy’s Revenge was Jack Sholder, who was also behind the movies Beeper, The Hidden, and Wishmaster 2.

The film had two credited cinematographers: Jacques Haitkin, of A Nightmare On Elm Street, Wishmaster, Evolver, Maniac Cop 3, The Ambulance, and Shocker, and Christopher Tufty, who worked as a camera operator on films like Piranha, The Beastmaster, Critters, and Best Seller.

A Nightmare On Elm Street 2 likewise had two credited editors: Bob Brady, who is best known for cutting Super Fly, and Arline Garson (House of Dark Shadows, The Swap, Alone In The Dark).

The musical score for the film was composed by Christopher Young, who also provided music for the films Trick or Treat, Hellraiser, Species, The Core, and Drag Me To Hell. 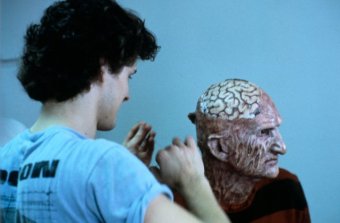 Wes Craven apparently declined to be involved with this specific A Nightmare On Elm Street sequel because of some issues with the screenplay and its portrayal of Kruger. He also reportedly had little to no desire to turn the film into a franchise from the beginning.

Recently, David Chaskin has claimed that the homoerotic subtext was written into the screenplay intentionally, but that the cast and crew were totally unaware of it during filming. It is now somewhat of a cult classic because of this, and regarded specifically as “the gay one” among fans of the franchise. Coincidentally, the cast lead of the movie (Mark Patton) was an openly gay actor, and considers himself the first male scream queen due to his specifically vocal role in the film. 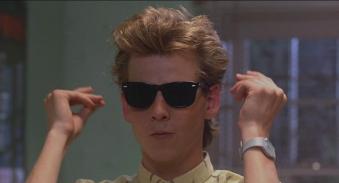 Reportedly, John Stamos, Brad Pitt, Christian Slater, and Michael J. Fox all either auditioned or were seriously considered for the lead role in the movie.

Robert Englund was not initially brought back to play Freddy Kruger in the film, and the role was instead filled in by an extra. The production eventually gave Englund the raise he initially asked for (and was denied) and brought him on board the film, because the extra was reportedly terrible in screen tests.

A Nightmare On Elm Street 2 was made on a budget of $3 million, on which it grossed roughly $30 million in North America alone. Its financial success paved the way for the franchise to continue, in spite of a poor reception with critics and fans. Currently, the movie holds a rating of 5.3 on IMDb, along with Rotten Tomatoes scores of 42% (critics) and 33% (audience), and most fans regard it as the weakest entry in the franchise.

One of the most entertaining moments in A Nightmare On Elm Street 2 is the infamous dance sequence, which was apparently included based on the success of the dancing sequence in Risky Business at the behest of the film’s producers.

Another infamous sequence in Freddy’s Revenge is the shower scene, which contains sexual subtext that is about as close to straight up text as subtext gets. Check out the whole thing below (included with a number of other highlights), in which a naked gym teacher is bound with jump ropes and repeatedly whipped with a towel:

Mark Patton, the lead in Freddy’s Revenge, has an impressive high-pitched scream that he gets plenty of mileage out of in this movie. It is hard to describe just how unreal it is, as it sounds almost like it was coming out of a young boy, and doesn’t fit Patton’s appearance or standard voice at all.

A Nightmare On Elm Street 2 is interestingly the only film in the franchise with a male in the center of the story being tortured by Freddy Kruger, with a woman in the more traditional “hero” role trying to save them. The film has gained some acclaim for this gender role reversal, and it has almost certainly helped contribute to its cult appeal.

Personally, I think this film is an interesting and fresh take that moves the story from the original movie in a new direction, which is what a sequel should ideally do. The idea of Freddy possessing people is interesting to me, as he otherwise shouldn’t be able to impact the physical world. I feel similar about this movie as I do about Halloween III: it is a different direction for a franchise that is original and inventive, but people ultimately just wanted more of the same. Both movies are certainly flawed, but they are both fun horror flicks that tried to change the mold of their respective franchises.

Overall, A Nightmare On Elm Street 2 isn’t totally awful, but it certainly isn’t good. It has a lot of entertaining moments, but they come in bursts, and are separated by some slow pacing and plenty of down time. That said, it is worth watching through at least once, and appreciating it as the Top Gun of horror movies. Horror fans and bad movie fans alike need to mark this one down as a necessary watch.

5 thoughts on “A Nightmare On Elm Street 2: Freddy’s Revenge”