Next up in my “Water Foul” spotlight on aquatic-themed monster flicks is “Hell Comes to Frogtown,” starring the one and only “Rowdy” Roddy Piper.

“Hell Comes To Frogtown” was co-directed, co-written, shot, and produced by Donald G. Jackson, who also wrote and directed “The Roller Blade Seven” and all three “Frogtown” sequels: “Frogtown II,” “The Toad Warrior,” and “Max Hell Frog Warrior.” The screenplay was written by Randall Frakes, who was a camera operator on “Escape From New York,” “Battle Beyond The Stars,” and “Galaxy of Terror,” and also served as a producer on “Hell Comes To Frogtown.”

The other credited director and editor on “Hell Comes To Frogtown” was R.J. Kizer, who has done sound editing on such films as “Interstellar,” “Daredevil,” “Jingle All The Way,” “Inception,” and “The Dark Knight Rises,” and did the primary editing on “Galaxy of Terror” and “Battle Beyond The Stars.”

The musical score on “Hell Comes To Frogtown” was provided by David Shapiro, who has worked on the soundtracks for “It’s Alive 3” and “Evil Laugh.”

The secondary editor for “Hell Comes To Frogtown” was James Matheny, who worked as a sound editor on such pictures as “The Exorcist,” “Gattaca,” “The Day After Tomorrow,” and “Big.”

The cast for “Hell Comes To Frogtown” is headlined by the professional wrestler “Rowdy” Roddy Piper, who starred in “They Live” and “Jungleground.” The rest of the cast is filled out by William Smith (“Conan The Barbarian,” “Boss,” “Maniac Cop”), Sandahl Bergman (“Red Sonja,” “Conan The Barbarian”), Rory Calhoun (“The Texan,” “The Colossus of Rhodes”), Eyde Byrde (“Doc Hollywood”), Nicholas Worth (“Swamp Thing,” “Darkman”) and Cliff Bemis (“Dallas”). 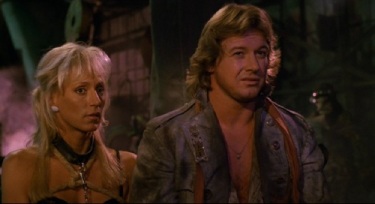 The story of “Hell Comes To Frogtown” takes place in a post nuclear war, matriarchal society with a rapidly dwindling population. The mostly-sterile humans that remain alive are constantly at war with various tribes of mutants, including a race of frog people. Hell, a legendary warrior with the rare trait of sexual virility, is captured by the matriarchal government, and impressed into a mission to rescue a group of women trapped in Frogtown. Along the way, he is required to mate with as many ovulating women as possible, or else he will be executed by his keepers.

“Hell Comes to Frogtown” managed to spawn (ha!) a number of sequels, including “Frogtown II,” “The Toad Warrior,” and “Max Hell Frog Warrior.”

“Hell Comes To Frogtown” has become a bit of a cult movie, but has never received any real acclaim. The film currently has an IMDb rating of 5.4, along with Rotten Tomatoes scores of 40% (critics) and 48% (audience).

“Hell Comes To Frogtown” was made on an estimated budget of $7 million, which almost certainly was mostly eaten up by the special effects, given the rest of the movie looks like it was made on a microbudget. I wasn’t able to dig up any gross numbers, but I would be shocked if it was able to make that amount back. However, the existence of so many sequels might indicate otherwise.

For whatever it is worth, the frog heads look pretty good in “Hell Comes To Frogtown,” especially considering that it predated the “Teenage Mutant Ninja Turtles” movie. Unfortunately, the rest of the movie doesn’t live up to them as far as quality goes.

The biggest problem with “Hell Comes To Frogtown” is the strange tone, which is generally goofy while also being violent and sexually explicit. It suffers from similar issues as “Hudson Hawk,” though it is a much more extreme case when it comes to the sexual aspects. Speaking of which, the film has a number of bizarre sexual situations that just feel completely out of place, and the film doesn’t really need them. In particular, the infamous “dance of the three snakes” comes to mind (which was originally written to be nude, making it all the stranger). All of that said, Roddy Piper does his damnedest to make it all work, and he winds up being a highlight of the movie. If the lead had taken the role more seriously, this would have been damn near unwatchable.

I do like the general atmosphere of “Hell Comes To Frogtown” from an aesthetic viewpoint, and it generally fits the popular image of a post-apocalypse: tattered clothes, armored vehicles, small western-style towns, endless deserts, a technology vacuum, and the inexplicable presence of heavy ammunition in spite of it all.

The result of the sexual ethics of the society combined with the production design, dialogue, and costuming is a very odd world: basically, it’s “Zardoz,” “Mad Max,” and the humor of “Escape From New York” in a blender, with all of the artistic merit carefully strained out. If that sounds appealing to you, and I know for many it does, then this is a movie worth giving a shot. It does have fun moments to be sure, but it wasn’t quite up my alley.