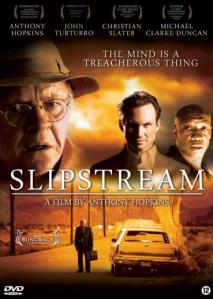 Next up is an official selection from 2007’s Sundance Film Festival: an Anthony Hopkins passion project which marks the third and final film I will cover by the name of “Slipstream.”

“Slipstream” was both written and directed by acclaimed veteran actor Anthony Hopkins (“The Silence of the Lambs”), marking his first screenwriting credit and his third directorial feature.

The cinematography on “Slipstream” was provided by Academy Award nominee Dante Spinotti, an Italian cinematographer who has regularly works on acclaimed Hollywood features since the 1990s. His credits have included “Manhunter,” “Red Dragon,” “L.A. Confidential,” “The Insider,” “The Quick and The Dead,” and even the much-applauded mega-hit “Hudson Hawk.”

The special effects on “Slipstream” were supervised by Ron Trost, who has accumulated nearly 100 special effects credits since the 1980s. Some of these films have include “The Omega Code,” “Mortal Kombat,” and “Seven Psychopaths,” truly running the gamut of quality.

Anthony Hopkins, in true dedication to his passion project, even composed the music for “Slipstream,” going so far as to perform on it as a piano soloist as well. Hopkins’s music was then arranged and orchestrated by Stephen Barton, who has worked on films such as “Man on Fire,” “The Number 23,” the the “Shrek” sequels.

The cast of “Slipstream” is impressively deep, and headlined by (of course) Anthony Hopkins himself. Christian Slater, Jeffrey Tambor, John Turturro, Michael Clarke Duncan, Michael Lerner, and Kevin McCarthy (as himself) all make appearances that drift in and out of the loosely-strung story. 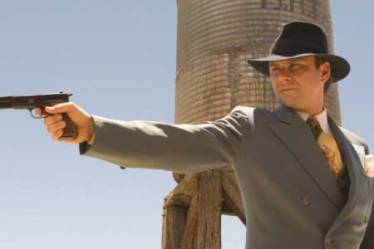 The surreal and convoluted plot to “Slipstream” more or less centers around an aging screenwriter (Hopkins) who believes that he may be losing his grip on reality. He is then unexpectedly called in to work on a film being adapted from one of his works. Unbeknownst to him, this is because the lead actor (Slater) has suddenly died on set, sending the production into disarray.

About the movie’s perplexing plot, Anthony Hopkins has been quoted as saying:

It’s about a man, who’s caught in a slipstream of time falling back on itself and he remembers his own future. My own interpretation is if there’s a God, that God is actually time. I’m fascinated by the fact the older I get every moment just slips past. What is real? You grasp this moment and then it’s gone. I was talking 10 minutes ago but that’s all gone, it’s all a dream.

Hopkins has also spoken a little about his personal motivation for writing the story:

I always wanted to poke fun at the movie business and the acting profession – they take themselves so seriously. I wanted to poke them in the nose. And what were people going to do? Arrest me if it wasn’t any good?

“Slipstream” was generally disliked by critics and audiences alike, and currently holds a 23% critics score and a 29% audience score on Rotten Tomatoes. It also currents has a mildly higher IMDb rating of 5.1, which is still well into the negative range. Here are some choice excerpts from some of the higher-profile critical reviews of the movie:

“…a creative anarchy that could either be considered tantalisingly multi-layered or simply a big mess. I think it’s both”
-The Daily Utah Chronicle

The two most common things I saw in both critic and audience reviews of “Slipstream” were the terms “stream of consciousness” and “unwatchable,” which just about sums up everything you need to know about it. It is certainly experimental, but the result is a combination of editing and cinematography that borders on nauseating. There is also no traditional plot structure to provide beats that can allow the audience to sense how far they are in the story, making the experience seem even longer and more arduous than it actually is. Some movies can get away with loose structures when they are interesting or entertaining, but “Slipstream” doesn’t deliver in either department. I will give Hopkins some credit, in that there is an attempted explanation for the poor editing in the meta-plot, but it doesn’t make the movie any easier to watch when you know that there is intentional logic behind it. The constant cuts, fades, color changes, audio changes, flipping frames, etc. are just as nauseating as if they had no reason to exist in the film at all.

When it comes right down to it, “Slipstream” is just another pretentious art movie among many. It absolutely reeks of being a passion project, which can often spell disaster out of the gate regardless of a film’s quality. It doesn’t help that it isn’t as clear cut or effectively innovative as “Birdman,” and not nearly as fun as “Rubber,” so it just winds up dragging the audience around for an hour and a half as a mediocre art piece.

If anything about “Slipstream” stands out as a positive, it is the great cast. There is generally good acting all around, but the nature of the story means that nobody gets to show off for long, though. Jeffrey Tambor and Christian Slater specifically stand out in my opinion, even though Slater gets particularly little time on screen. On the flip side, this might be the worst John Turturro performance I have ever seen him deliver. He really feels miscast as an angry scumbag producer: I can’t help but feel that a more intimidating actor could have been pulled in for the part.

“Slipstream” is clearly much better in concept and on the page than it is in execution on film. According to what I have read, Hopkins couldn’t get anyone else to commit to making it, so he wound up taking on almost all of the creative roles himself. I think that this movie could have definitely used a second creative mind in the mix, even if only to act as a check / balance for some of the more outlandish fringe concepts coming out of Hopkins’s head, particularly on the initial screenplay.

Overall, “Slipstream” is a nearly unwatchable, pretentious mess. It doesn’t have a whole lot of “good-bad” entertainment value, but it might be worth a watch for the curiosity of it alone. The performances are at least pretty good, but the only reason I could recommend this film is if you want to get a glimpse into the strange creative mind of Anthony Hopkins.