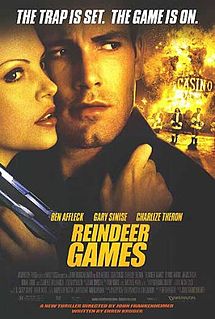 Today’s feature is Reindeer Games, a holiday-themed heist film with a dose of mistaken identity.

The writer for Reindeer Games was Ehren Kruger, who also did screenplays for the movie Scream 3, The Ring, Transformers: Revenge of the Fallen, Transformers: Dark of the Moon, and Transformers: Age of Extinction.

Reindeer Games was the final theatrical film for director John Frankenheimer, whose credits included The Island of Doctor Moreau, French Connection II, Birdman of Alcatraz, The Manchurian Candidate, and Ronin.

The cinematographer for the movie was Alan Caso, who has done extensive television work on shows like Big Love, Dexter, Hawaii Five-0, Lie To Me, and Six Feet Under, and shot a handful of movies like Muppets From Space and Ed.

The visual effects on Reindeer Games were done by the companies Cinema Production Services (The Core, The League of Extraordinary Gentlemen, The Faculty, Final Destination, The Adventures of Pluto Nash) and Digiscope (Mimic, Spawn, Volcano, Lake Placid, Freddy vs. Jason, Torque, Van Helsing).

The music for Reindeer Games was composed by Alan Silvestri, one of the most acclaimed film scorers in the business. Outside of Academy Award nominations for Forrest Gump and The Polar Express, his other credits have included Cast Away, The Avengers, Van Helsing, Judge Dredd, Super Mario Bros., Cop And A Half, Predator 2, Mac And Me, Who Framed Roger Rabbit, Death Becomes Her, The Abyss, The Quick and The Dead, and Mousehunt. 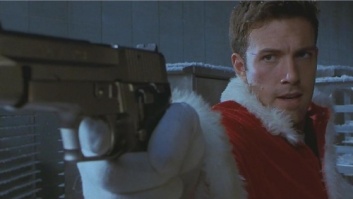 The plot of Reindeer Games is summarized on IMDb as follows:

After assuming his dead cellmate’s identity to get with his girlfriend, an ex-con finds himself the reluctant participant in a casino heist.

Vin Diesel was apparently initially cast for a role in Reindeer Games, but left the production before filming began. Conflicting reports indicate that he was either fired by John Frankenheimer because of his demands, or the he simply walked away because of an offer for a lead role in The Fast and The Furious, which has proven to be a career-defining performance.

As of 2007, Charlize Theron publicly regarded Reindeer Games as the worst movie she had ever done, remarking that it “was a bad, bad, bad movie.”

The term “Reindeer Games” comes from the song “Rudolph the Red-nosed Reindeer,” and refers to activities where certain people are explicitly and deliberately excluded, and are aware of their exclusion. Theoretically, this is meant to allude to the multiple deceptions and plots that occur over the plot of the film, all of which Ben Affleck’s “Rudolph” character is oblivious to and excluded from. In fact, an alternate title for the movie was more to the point: simply, Deception.

Reindeer Games has a production budget of $42 million, on which it grossed only $32 million in its lifetime worldwide theatrical release, making it a significant financial failure. Likewise, it was far from a critical success: it currently holds Rotten Tomatoes aggregate scores of 25% from critics and 27% from audiences, alongside an IMDb user rating of 5.7.

One of the big problems a lot of people have with many movies that star Ben Affleck, like Daredevil or Paycheck, is that he isn’t a believable enough dramatic lead. Personally, I’ve always felt that he is perfectly adequate, even in those sorts of flicks. Reindeer Games, though, I think was particularly well-suited for him. As many critics pointed out, this movie was an attempt to mimic a Tarantino-style crime flick, meaning that there is a fair amount of comedic timing and dialogue needed from the lead, which is something Affleck is naturally pretty good at. As much as this was decently cast, that alone can’t make for a good movie.

One of the big problems here is that the screenplay is not Tarantino-caliber, meaning that the dialogue doesn’t flow terribly well, which saps it the story and characters of their potential charm. I actually think that Reindeer Games could have been a really solid movie with a screenplay rewrite. As I have mentioned with other movies, making a flick on a weak screenplay is like building a house on sand: even good directors can’t build a solid structure without a foundation.

Reindeer Games, to the credit of the crew, looks like a good movie. It reminded me a lot of a similar movie that came out a year later: Swordfish. Both movies have decent casts, look good, and try their damnedest to be clever and witty with their screenplays. However, they both falter in a lot of the same ways, most notably in the preposterous nature of their respective stories and the weakness of their written dialogue.

Personally, I couldn’t bring myself to honestly hate this movie. Above all else, it is a disappointing underachievement from a good director, a talented cast, and an interesting concept. In theory, this is a sort of hybrid of Hitchcock and Tarantino, which is pretty damn cool combination of styles. However, it totally fails to live up to that promise. It is totally watchable, but not terribly entertaining: I would place it on the boundary between being a bad movie and being a mediocre Hollywood movie, which is one of the worst spots a movie can find itself in. It isn’t bad enough to be entertainingly bad, and not good enough to watch on its own merits. Unless you are just dying to see a Christmas-themed crime movie and have exhausted all of your other options, there aren’t any compelling reasons to dig this up.

For more thoughts on Reindeer Games, I recommend checking out the How Did This Get Made? podcast, as well as the official review by Roger Ebert. On the flip side, you can check out a positive review from Mark LaSalle of the San Francisco Chronicle for a dissenting perspective.

One thought on “Reindeer Games”