Cop And A Half 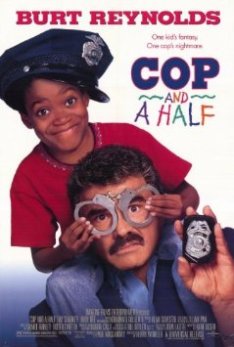 Today’s feature is the much-maligned buddy cop comedy, Cop And A Half.

Cop and A Half was written by Arne Olsen, who also penned the films Red Scorpion and Mighty Morphin Power Rangers: The Movie. The film was directed by actor Henry Winkler, who is best known for playing The Fonz on the show Happy Days. However, he has also featured in films and television shows like Scream, Arrested Development, Night Shift, and The Waterboy.

The cinematographer for the film was Bill Butler, who has shot such movies as Jaws, Grease, Rocky IV, Anaconda, Child’s Play, The Conversation, and Frailty over his career.

The producers on Cop And A Half were Tova Laiter (The Scarlet Letter, Varsity Blues), Elaine Hall, and Paul Maslansky (Police Academy).

The musical score for Cop And A Half was composed by Alan Silvestri, who also provided the music for such films as Van Helsing, Volcano, Judge Dredd, Forrest Gump, Super Mario Bros., Predator 2, Mac And Me, and The Abyss. 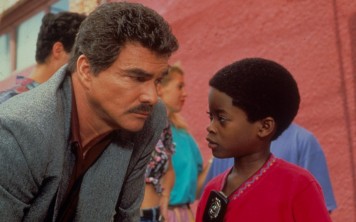 Cop And A Half proved to be the final acting role for Ray Sharkey, who died of AIDS shortly after he completed the movie in 1993. The character actor was only 40 years old at the time of his death.

Apparently, Cop And A Half was initially proposed as a sequel to the Arnold Schwarzenegger comedy Kindergarten Cop, but was ultimately rewritten so that it could stand alone.

Cop And A Half made just over $40 million in its worldwide theatrical release, though I wasn’t able to find any estimates on the production budget. Regardless, it was certainly profitable on the whole. However, critics and audiences alike loathed the movie, earning it a 3.8 rating on IMDb and Rotten Tomatoes scores of 17% (critics) and 35% (audience).

The child is way too obnoxious and precocious, which seems to be the entire crux of the movie’s premise. Unfortunately, it just winds up being infinitely grating as opposed to charming or silly, not unlike the Baby Geniuses flicks.

The flip side of the annoying child performance by Norman Golden II is Burt Reynolds, who I thought was actually pretty great given the circumstances. Most of the scenes of him threatening the child come off as hilariously inappropriate, and he never softens on his tough0nosed attitude throughout the film.

There are a couple of odd sequences in this film that have contributed to it being at the very least memorable. First off, there is one scene where Burt Reynolds and the child go to a seedy biker bar, and the kid orders a milk “in a dirty glass.” Second, and more infamously, there is an inexplicable sequence where Burt Reynolds starts urinating in a toilet while the child is brushing his teeth, at which point the kid insists they play “swords,” and proceeds to pee on his shoes. That bit is about as awkward and unfunny as it sounds.

Overall, the biggest issue with Cop And A Half is the “Half”: the child character played by Golden. The kid is written badly, performed badly, and is generally a nuisance to have on screen. Unfortunately, the child makes up the lion’s share of the movie, but it is worth noting that the other elements here aren’t all that terrible. Burt Reynolds is pretty solid as a bitter veteran cop, Ray Sharkey is entertaining as the flamboyant villain, and the plot (while complete nonsense) at least serves to keep the ball rolling throughout the run time. It is kind of a shame that Winkler gave up on directing features after this, because I don’t see the issues with this movie as being particularly his fault. He’s done a little bit of television directing over the years, but it looks like Cop And A Half will remain the capstone for film directing career.

This is a very difficult movie to recommend. Personally, I can’t stand bad child acting, and would normally advise avoiding any feature that has a bad child actor in a lead role. Cop And A Half, however, was almost redeemed for me based on its “WTF” value: Burt Reynolds screaming threats at the shitty kid, the ludicrous plot, and the few moments that tread into the outlandishly bizarre make this at least a somewhat entertaining watch, in spite of the awful lead.

4 thoughts on “Cop And A Half”