Shark was directed and co-written by Samuel Fuller, who is known for such films as White Dog and The Big Red One. The other co-writer on the flick was John Dugan, who had an assortment of obscure television writing credits over his career.

The story of Shark is based loosely on the novel “His Bones Are Coral” by Victor Canning, who also famously wrote the source material for Alfred Hitchcock’s Family Plot.

The cinematographer for Shark was Raul Martinez Solares, who shot such Santa Claus, Night of the Bloody Apes, and a number of Santo movies among his astounding 278 career cinematography credits.

The editor on the film was Carlos Savage, who also cut such films as Simon of the Desert, Los Olvidados, and The Exterminating Angel.

The story of Shark follows a gun-runner played by Burt Reynolds who becomes stranded after losing his cargo off the shore of Sudan. He winds up being hired to salvage and plunder a ship lost in nearby shark-infested waters as attempt to cover his losses, but the trek puts him in even greater peril than he would have expected.

Alternate titles for this flick included Caine, Man-Eater, and Shark! (with an emphasized exclamation). The movie went through a number of name changes after a stuntman was attacked and killed on camera by a supposedly sedated shark, which was distastefully used by producers to promote the film. Samuel Fuller decided to quit the production because of the tragic death being used as an advertising gimmick. Fuller even tried to take his name off of the final release of the film, but to no avail. 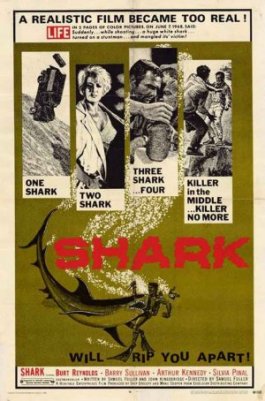 Shark certainly isn’t a beloved movie: it currently holds a 4.4 rating on IMDb, alongside a 30% audience score on Rotten Tomatoes. The fact that the producers used a tragic death during the production to promote the film almost certainly left a bitter taste in many viewers mouths, much as it did Fuller.

It is kind of surreal to see Burt Reynolds so young on film, and without his iconic mustache. He is certainly handsome, but has more of a Marlon Brando, old Hollywood look to him that I just don’t associate with Burt Reynolds’s appearance as we think of him in the public consciousness. While he had been on television a bit already in shows like Gunsmoke and Hawk, 1969 was really when he started taking on lead roles in feature films. Apart from Shark, he also popped up in Sam Whiskey and 100 Rifles that year, which primed him to show up in the higher profile films Deliverance and Fuzz in 1972. The combination of those two movies put him solidly in the public consciousness as a movie star, and his career blossomed from there (at least until Cop & 1/2, that is).

I watched this movie on a secondhand VHS, because this is not an easy flick to come by. However, the drawback is that the quality of the copy was garbage, and wasn’t able to tell if the tape or the actual source film was the issue. Regardless, the movie that I watched didn’t look very good from a quality standpoint, though the shots were certainly not incompetently put together (they are even pretty great at times).

The infamous shark wrestling sequences are really eerie to watch, as supposedly they kept the footage in that killed the stunt worker. It is pretty clear from watching the footage that they were not taking adequate precautions, much like with the similar sequences in The Shark Hunter. To understate it immensely, the experience is uncomfortable.

Silvia Pinal, who appears as Reynolds’s love interest in Shark, is absolutely fantastic in the movie, and her chemistry with Reynolds is through the roof. Apparently, she is an acclaimed Mexican stage and film actress, and appeared in a number of acclaimed films by Luis Bunuel in the early 1960s: The Exterminating Angel, Simon of the Desert, and Viridiana.

Overall, Shark feels like a good movie that could have been. From what I have read, Fuller leaving the production meant the movie was left in the hands of the producing team for post-production and editing, where it was hacked quite badly. Combined with the the poor physical quality of the film, the totally serviceable acting and directing in the film is tragically totally wasted. This is the sort of movie that bothers me more than any other: a project with immense potential that wound up missing the mark for reasons beyond the creative vision. You could almost describe it as heartbreaking.

Mostly because this was such a massive pain to dig up, I can’t really recommend going through the trouble of digging this movie up. If you are a huge Burt Reynolds fan, it might be worth seeing some of his early work, but otherwise, the trivia behind the movie is the most interesting aspect of it, and that doesn’t require actually watching it.