Today’s picture is one of the most hated biopics ever made: 1989’s Wired, which paints a less-than-generous portrait of comedian John Belushi.

The screenplay for Wired was written by Earl Mac Rauch, whose other credits include Martin Scorcese’s flop New York, New York, and the cult sci-fi movie The Adventures of Buckaroo Banzai Across The 8th Dimension. The source material for the movie was penned by journalist Bob Woodward, who is best known for his involvement in exposing the Watergate scandal.

The director on Wired was Larry Peerce, who worked on the television shows Batman and Touched By An Angel, and also helmed a handful of movies dating back to the early 1960s, including Goodbye, Columbus and The Other Side Of The Mountain.

The cinematographer for the film was Tony Imi, who also shot the movies Babycakes, Enemy Mine, and Survival Island.

The plot of Wired is summarized on IMDb as follows:

The ghost of John Belushi looks back on his troubled life and career, while journalist Bob Woodward researches Belushi’s life as he prepares to write a book about the late comic actor.

In one of the sequences featuring the fictionalized John Landis, a helicopter is prominently heard in the background. This is a not-so-subtle reference to an infamous on-set accident involving a helicopter on Twilight Zone: The Movie that killed three people under his watch, including actor Vic Morrow (The Last Shark, 1990: The Bronx Warriors).

Given that Wired was not an authorized biographical feature, it was haunted by the specter of legal issues. Numerous prominent figures in Belushi’s life threatened to sue if they were portrayed in the film, and Saturday Night Live skits were officially off-limits thanks to NBC’s copyright. The result of this on screen is the featuring of oddly manufactured facsimiles of SNL skits, which only vaguely resemble actual performances, and feature few (if any) of Belushi’s co-stars. 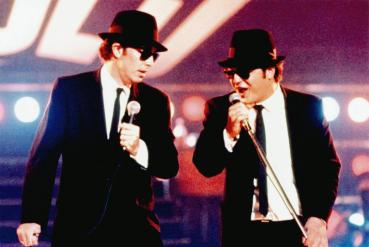 Wired was widely reviled by both audiences and critics alike upon its release: it currently holds a 4.5 on IMDb, along with Rotten Tomatoes aggregate scores of 4% from critics and 15% from audiences. Appropriately, the movie was also a financial disaster. On a production budget of roughly $13 million, the movie only managed to gross just over $1 million in its theatrical run, which was significantly impacted by a boycott of the movie which was vocally supported by many of Belushi’s friends and family.

The portrayal of John Belushi in this movie, as many have pointed out, is written is an excessively brutal way, which emphasizes everything negative about the man, while glossing over any of his positive impacts and traits. However, Chiklis’s performance is actually pretty spot-on if you ask me, despite the issues with the material he was working with. His mannerisms and voice were clearly the result of some meticulous effort on his part, and the result is pretty impressive.

Something that bothered me a lot about Wired is how much it feels like a vanity project of the author, Bob Woodward. The fact that he is written into the screenplay as a character is a bit over the top, and Belushi’s portrayed obsessive fascination with him as a celebrity is a little beyond ridiculous. If Belushi’s portrayal wasn’t enough poor taste for this movie, the self-aggrandizing portrait of Bob Woodword adds a layer of sleaze on top of the stack.

The message of Wired is nothing if not heavy-handed, which is a significant weakness of the film. A good biopic should focus on building the central character, with the flaws included as part of the holistic entity of them. Wired, however, just focuses on the flaws of John Belushi, which gives an incomplete picture of the character, and makes his downfall less potent as a result. If the movie wanted to effectively telegraph an anti-drug message, it should have built up a sympathetic character, and then had him destroyed by his drug addiction, which would have had emotional weight. As it stands, Belushi is painted as an asshole from the start, so the tragedy of his story is negated.

Overall, Wired isn’t the worst movie out there. There are actually some interesting aspects to it, like the surreal framing device, some moments of appropriately bleak humor, and Chiklis’s performance. That said, the screenplay clearly has an axe to grind and a message to deliver, which taints everything it touches. The result is a bitter, self-righteous, and hateful movie that is impossible to like, in spite of some of its positive aspects. I can’t very well recommend the movie, because it isn’t a film that can really be enjoyed. However, it has some trivia value thanks to its background, which might make it worth checking out for some.

For some other thoughts on Wired, I recommend checking out the coverage of the movie by The Cinema Snob , as well as the episode on it by the We Hate Movies podcast.