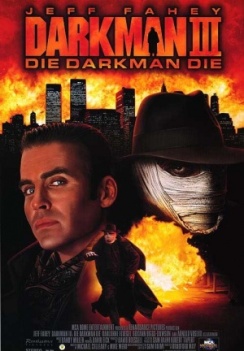 Darkman III was directed and shot by Bradford May, an experienced television director who worked on shows like Dallas, Hawaii Five-O, JAG, Smallville, and Supernatural, and also helm the previous entry in the Darkman franchise, Darkman II: The Return of Durant.

The editor for Darkman III: Die Darkman Die was Daniel T. Cahn, who has done extensive editing on he small screen for shows like The Young and The Restless, Cheers, and 7th Heaven, and also cut the high-tech creature feature How To Make A Monster.

The original musical score for Darkman III was provided by Randy Miller (Hellraiser III, Darkman II), with Danny Elfman’s themes from Darkman getting some heavy re-use.

The plot of Darkman III: Die Darkman Die is summarized on IMDb as follows:

Darkman, needing money to continue his experiments on synthetic skin, steals a crate of cash from drug lord Peter Rooker, attracting the gangster’s attention. Rooker is determined to find the source of Darkman’s super strength, and uses his beautiful but evil doctor to lure Darkman into a trap. Thinking that the doctor will restore feeling to his tortured body, he discovers too late that they have taken a sample of his adrenaline, which they will market as a super steroid. As Darkman plans his revenge on Rooker’s gang, he slowly begins to care about Rooker’s neglected wife and daughter. He must now find a way to help them, and destroy Rooker before he uses the adrenaline to plunge the city into chaos.

Darkman III was, like its predecessor, released straight to video, and was not given a theatrical release. Still, it wasn’t received well by those who did catch it: the movie currently holds a 4.7 user rating on IMDb, alongside equally abysmal Rotten Tomatoes aggregate scores of 33% from critics and 21% from audiences.

The introduction to the movie looks and feels like the start of a television show rather than a movie. The background is laid out in voiceover and clips ahead of the credits, rather than having it weaved into the story itself. It seems unnecessary and amateurish to me, to say the least. Even if this was meant to be a television show script, it should have been modified to suit this form.

Given this movie was filmed back to back with Darkman II, most of my criticisms of that movie still stand here, so I’ll avoid retreading on any of that. One of the big differences between the two is the antagonist, who is played by Jeff Fahey as a new character in Die Darkman Die.

I like the concept behind the plot here: inevitably the clandestine research done by Darkman would continue to mount expenses, and his vigilante activities would draw a lot of attention from both police and criminals. The concept of manufacturing his power and distributing it as a drug adds a great little commentary about capitalism and drug use to the story, which is a nice new dimension to it as well.

As much as I like aspects of Darkman III, it is ultimately still a disappointing, half-assed sequel when placed next to the original Darkman. Because this is less of a sequel as much as it is a parallel film with Darkman II, it doesn’t really have an opportunity to improve on any of its problems. Basically, this is just more of the same, rather than a new film with an entirely new vision. I can’t say that it is better than Darkman II, because that film is undoubtedly more suited as a sequel to the original, but it also isn’t the worst thing out there. For what is probably the worst film in the franchise, it isn’t all that bad, particularly for straight to video action.

For bad movie fans, I think the whole Darkman series is worth checking out. Both of the sequels have some upsides that justify viewing, and the original is simply a fantastic cult movie.