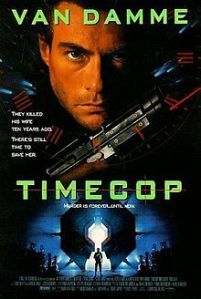 Welcome back to the Misan[trope]y Movie Blog! Today’s feature is the 1994 time travel action flick, “Timecop.”

“Timecop” was directed by Peter Hyams, whose other films have included “End of Days,” “Capricorn One,”  and “Stay Tuned.” He also provided the cinematography for the movie, something that he has done on a number of his features.

“Timecop” is an adaptation of a Dark Horse comic story by Mark Verheiden and Mike Richardson. It was written for the screen by Verheiden, who has worked on films and television shows such as “Smallville,” “Battlestar Galactica,” and “The Mask” as both a writer and a producer.

The music on “Timecop” was provided by Mark Isham, who has provided scores to films like “Point Break,” “Lions For Lambs,” “The Net,” “Quiz Show,” “October Sky,” and “The Hitcher.” Over his significant career, he has accumulated nearly 150 composition credits for films.

The special effects team for “Timecop” included elements from such productions as “Robot Jox,” “E.T.,” “A.I.,” “Lake Placid,” “The Cabin In The Woods,” “Watchmen,” “Superman,” “It,” and “First Blood,” among many others. The visual effects supervisor for “Timecop” was Gregory McMurry, who has worked on such films as “Argo,” “The Core,” “Con Air,” “Predator 2,” “Star Trek: The Motion Picture,” and “Blade Runner” over his film career since the 1970s.

The production design on “Timecop” was done by one Philip Harrison, who worked on films like “The Core,” “Spawn,” “Mississippi Burning,” and “Stay Tuned.” “Timecop” was edited by Steven Kemper, who has cut such features as “Face/Off,” “Mission: Impossible II,” and “Harry And The Hendersons.”

The cast for “Timecop” is headlined by Jean-Claude Van Damme, one of the most iconic and recognizable action stars of the era. The accessory cast is filled out by Mia Sara (“Daughter of Darkness,” “Ferris Bueller’s Day Off”), Ron Silver (“The West Wing”), Bruce McGill (“Lincoln,” “Collateral”), Gloria Reuben (“ER”), and Kenneth Welsh (“The Aviator”). 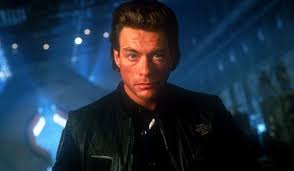 The story of “Timecop,” predictably enough, is about a police officer tasked with stopping crimes committed via time travel. He winds up attempting to thwart a vast power play helmed by an ambitious politician who is exploiting his access to time travel technology as a criminal enterprise.

The success of “Timecop” eventually spawned both a sequel and a television series, and rumors of a remake in the near future have been floating around for a couple of years (without the involvement of JCVD, reportedly).

The Jean-Claude Van Damme movie “Sudden Death” was made back-to-back with “Timecop,” and featured many of the same players from the “Timecop” production team.

“Timecop” wasn’t generally received well by critics, though it is one of the higher regarded films from Jean-Claude Van Damme’s filmography. It currently holds a 5.8 IMDb score, along with Rotten Tomatoes ratings of 43% (critics) and 35% (audience).

“Timecop” was made on a $27 million budget, and grossed close to $102 million worldwide in its theatrical run, making it a significant hit. It is one of the very few Jean-Claude Van Damme movies to break 100 million in total grosses, and is regarded as one of the highlights of his career.

In his review, Roger Ebert called “Timecop” “a low-rent ‘Terminator,'” and that influence can certainly be seen throughout the film. The financial success of the first two “Terminator” movies spawned a horde of imitators, and while the plot to “Timecop” bears less similarities than most of them, the focus on time travel action goes a long way towards inviting comparisons.

A number of the critical complaints I saw about “Timecop” were regarding the way that time travel is treated in the film, in the sense that not enough thought or originality is put into it’s portrayal or repercussions. I think it is a little ridiculous to expect hard science in this sort of action movie, but there are certainly some moments in the story that require some significant suspension of disbelief.

“Timecop” is arguably a showcase of Jean-Claude Van Damme at his peak physique, and that is something the film definitely uses. He is absolutely a believable action hero, and the somewhat infamous shots of his splits certainly aren’t done with special effects.

Speaking of which, the special effects that are used in the film have not particularly aged well, especially when compared to other early 1990s movies. I have seen a number of complaints about this from more recent reviews, but I am sure that in the context of the time they were at least passable. “Timecop” is essentially a step above a b-movie, but not quite an A-list feature, and it definitely looks like it.

Overall, “Timecop” certainly isn’t an elite sci-fi or action movie, and isn’t anywhere near my go to “-cop” movies (“Robocop,” “Maniac Cop,” “Samurai Cop”…). There are better action movies and better sci-fi movies, but “Timecop” finds a perfectly OK middle ground. It isn’t incredibly memorable, but I don’t think most would regret watching it.

“Timecop” certainly has some fun moments, and if you are a fan of JCVD, this is almost sure to be up your alley. I definitely recommend checking out the We Hate Movies podcast episode on the movie to get a more thorough idea of what you are in for. It treads the line between being a bad movie and just being a generic action flick, but either way you can find some enjoyment here.