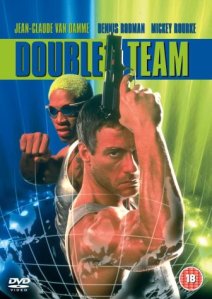 One of the writers for “Double Team” was Don Jakoby (“Evolution,” “Vampires,” “Philadelphia Experiment II”), who also served as a producer on the film. The other credited screenplay contributor was Paul Mones, an actor who appears in the James Spader movie “Tuff Turf,” and who also wrote some smaller flicks like “Fathers & Sons,” starring Jeff Goldblum.

The director for “Double Team” was Hark Tsui, an acclaimed Chinese action movie director who was making his American debut. He has also been behind films like “Knock Off,” “Seven Swords,” and the “Once Upon A Time In China” series.

The cinematographer for “Double Team” was Peter Pau, who also shot “Shoot ‘Em Up,” “Dracula 2000,” and “Bride of Chucky.”

The editor on “Double Team” was Bill Pankow, who has cut an assortment of acclaimed films, including “Snake Eyes” and “The Untouchables.”

The distinct musical score for “Double Team” was done by Gary Chang, who also scored “A Shock To The System,” “The Substitute,” and the infamous 1996 version of “The Island of Dr. Moreau” starring Val Kilmer and Marlon Brando.

The cast for “Double Team” is of course highlighted by Jean Claude Van Damme (“Timecop,” “Cyborg,” “JCVD”) and Dennis Rodman (“Simon Sez”), with Mickey Rourke (“Angel Heart,” “The Wrestler,” “Iron Man 2”) filling in as their antagonist.

The story of “Double Team” focuses primarily on Van Damme, who is a special agent on the verge of retirement with a young child on the way. On a mission involving Rodman, he manages to make a dramatic mistake which lands him into an unofficial prison camp for ex-operatives. The story quickly turns into a tale of escape and revenge, culminating in a number of significant explosions.

Mickey Rourke, in preparation for his villainous role opposite Van Dame, apparently took significant martial arts training to get into shape. The result is a surprisingly ripped Rourke, who would years later mimic the physique for his acclaimed role in “The Wrestler.”

“Double Team” apparently had sequel plans, though they never materialized for one reason or another. My guess is that Rodmen’s acting aspirations didn’t quite pan out, making a sequel difficult.

“Double Team” was apparently the first film to use a Coca Cola vending machine as direct product placement, which unbelievably plays a significant role in the film’s plot.

The reception to “Double Team” wasn’t exactly fantastic, and it has earned a 4.6 rating on IMDb, along with Rotten Tomatoes scores of 11% (critics) and 24% (audience).

The budget for “Double Team” was reportedly around $30 million, of which only about $11.5 million was made back in the film’s U.S. theatrical release.

One of the most memorable and bizarre aspects of “Double Team” is the use of odd sets and locations. For instance, Dennis Rodman’s introduction takes place in a neon SCUBA nightclub, the finale takes place in a coliseum, and a major firefight is set in the middle of a carnival, complete with clowns getting downed as casualties in the crossfire.

Speaking of which, boy does this movie destroy that carnival. Clearly the production had a lot of fun with the location, and got everything they could out of it. Also, outside of the clown murder, a child and countless bystanders also die in the same scene.

The product placement in “Double Team” is a little over the top, particularly for Coca Cola. Not only does a coke machine wind up playing a key role in saving the central characters from an explosion, but a coke can also features prominently in Van Damme’s escape from his pseudo-prison. It is one thing for products to appear in a film, but it is another for the name brand to actually serve a direct function in the plot.

As you might expect, “Double Team” features lots of explosions and fireballs. Unfortunately, most of them look just fucking terrible, which is kind of astounding. The finale sequence has some of the worst executed explosions I have ever seen, and they look terrible enough that they essentially ruin the sequence.

When it comes to the plot of “Double Team,” I actually thought that the bizarre hitman/special agent retirement home was a far more interesting and original concept than the central revenge storyline. Personally, I would rather see a movie about that, making a sort of hybrid of “John Wick” and “Fortress.”

Unsurprisingly, Dennis Rodman’s outfits are way out there, and add a lot of color to the film. Rodman as an actor isn’t really suited for comic relief though, and he is frankly better as the straight man in “Simon Sez” than he is here. Of course, the writing didn’t help anything, particularly with the near-constant basketball references forced into the dialogue.

Interestingly, “Double Team” features an order of cyber monks, much like the other Rodman film “Simon Sez.” However, they don’t appear to be connected in any way, making for an unexpected coincidence.

Mickey Rourke is actually pretty fantastic in “Double Team,” and is easily too good for the movie. He looks intimidating and sinister, and delivers a performance worthy of a much better script. His death is also one of the most memorable ones from any action film, as he kills himself with a land mine while being mauled by a giant tiger.

The sheer volume of collateral damage and casualties in “Double Team” is unusually high, even for an action flick. It seems like every major sequence has to have at least one innocent gunned down, which makes it stand out from most other oddball, buddy action movies.

The best fight sequence of the movie is undoubtedly the foot knife fight, which features some solid choreography and camera work. Unfortunately, it is also one of the shorter sequences in the film, which was a little disappointing, especially given how long the others seem to drag on for.

The finale of “Double Team” rose an interesting question for me: did Rourke buy the same tiger from the carnival where his wife and son died? Was the specific tiger part of his revenge plan? I don’t see how it would make sense to have an entirely different tiger introduced in act three, but trying to think through Rourke’s logic is boggling. Maybe his grief made him commit a lot of bizarre impulse purchases from the carnival?

Overall, “Double Team” has some solid highlights, but is a little too slow and sloppily edited to be a lot of fun. The beginning and end are good enough, but the middle drags a bit more than it needed to. It isn’t a painful watch though, and the finale is enough in my book to warrant a recommendation.