Today’s feature is a holiday sequel that no one expected or wanted: Christmas Vacation 2: Cousin Eddie’s Island Adventure.

The writer for Christmas Vacation 2 was producer Matty Simmons, who was a producer on movies like Animal House and the entire Vacation series (Vacation, European Vacation, Christmas Vacation, Vegas Vacation). His writing credits, however, are less prestigious: a lesser National Lampoon movie called Pucked, and a couple of episodes of the television show Delta House make up the majority of his experience on that front.

Christmas Vacation 2 was directed by Nick Marck, who has worked extensively on television shows like Greek, Veronica Mars, Buffy The Vampire Slayer, Dawson’s Creek, Northern Exposure, and The Wonder Years over his directing career.

The cinematographer for Christmas Vacation 2 was Rohn Schmidt, who shot movies like Philadelphia Experiment 2, Beastmaster 2, and Ghoulies Go To College, as well as numerous episodes of The Walking Dead, Saving Grace, The Shield, and Huff.

The editor for the film was Joel Goodman, who cut such films as The Prowler, Lawnmower Man 2, and The Abyss, as well as multiple episodes of Rescue Me and Community.

The effects work on Christmas Vacation 2 was done by a team that included Rick Cortes (How I Met Your Mother, Dexter, League of Extraordinary Gentlemen, Double Team, Smallville), David Takemura (Drive Angry, Star Trek: The Next Generation), and Lisa Rocco (Masters of the Universe, The Hunger Games, The Naked Gun).

The musical score for the movie was provided by Nathan Furst, who has also done music for flicks like Need For Speed, Act of Valor, Lake Placid 3, and Lake Placid 2. 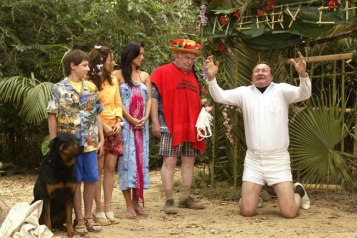 The plot of Christmas Vacation 2 is summarized on IMDb as follows:

A holiday to the South Pacific turns awry, when Cousin Eddie’s family and a tour guide are shipwrecked on an island.

In Christmas Vacation 2, Dana Barron reprises her character of Audrey Griswold, who she portrayed in the original Vacation. Curiously, this is the only time that someone played the character twice: in all the other movies, her character was re-cast.

Randy Quaid, the lead actor in Christmas Vacation 2, has one of the most dramatic Hollywood falls from grace in history. He is an Academy Award and Golden Globe nominee who once had a significant film and television career, but descended into the realm of inane conspiracy theories and significant legal trouble starting in the late 2000s, from which he has yet to recover.

Christmas Vacation 2 is near-universally reviled: it currently holds a 2.7 user rating on IMDb, along with a 13% audience aggregate score on Rotten Tomatoes.

This is honestly one of the most flubbed comedies I have ever sat through. It is actually pretty astounding how poor the comedic timing is, and how often the attempted jokes fall completely flat. Sequences drag on way too long, punchlines don’t hit, and most of the attempted jokes come from really unpleasant places: mostly mocking people for being unintelligent, old, suicidal, or poor. Alternatively (and unsurprisingly), there are also a lot of farts to be had.

Having a movie entirely based on the premise that a character (Eddie, of course) is inept can only go so far: there needs to be a little more rounding than that, or at least some unusual situations for the character to deal with. Another movie that I was reminded of while watching this was The Jerk, which manages to make this formula entertaining by giving the central character charming naivete and exposing him to outlandish situations, like inexplicably becoming a corporate success. Cousin Eddie, on the other hand, is just written to focus on physical buffoonery in a variety of locations.

Bad comedies are consistently some of the most un-entertaining movies I have ever come across. Rarely do movies like Christmas Vacation 2 have any kind of redeeming value, and I can’t say that this is an exception to that rule. If anything, this is even lazier than your typical spoof movie, which at least put some effort into lambasting the current box office leaders and pop culture icons. Christmas Vacation 2 was a bad idea to start with, was turned into a bad script, and then was executed poorly in almost every conceivable way. Unless you are inexplicably a Randy Quaid completionist or a die-hard fan of the Vacation franchise, there isn’t any reason to give this flick even a passing glance.

For more thoughts on Christmas Vacation 2, I can heartily recommend the coverage of it on the Christmas edition of Red Letter Media’s Best of the Worst. Frankly, they say everything there is to say about it.