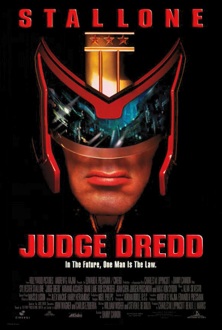 Judge Dredd is an adaptation from a comic series created by John Wagner and Carlos Ezquerra, and is based on a specific plot line conceived of by Michael De Luca (In The Mouth of Madness, Freddy’s Dead: The Final Nightmare) and co-screenwriter William Wisher (Terminator 2, The Terminator, The 13th Warrior).

The screenplay was, as mentioned, co-written by William Wisher in cooperation with Steven de Souza, who is best known for such films as Street Fighter, Die Hard, Hudson Hawk, The Running Man, and Commando.

Judge Dredd was directed by one Danny Cannon, who was also behind the films I Still Know What You Did Last Summer and Phoenix, as well as some extensive on television shows like CSI, Gotham, and Nikita.

The cinematographer for the film was Adrian Biddle, who also shot such movies as Event Horizon, Willow, Aliens, The Princess Bride, and Reign of Fire.

Judge Dredd had two primary editors: Harry Keramidas, best known for cutting Children of the Corn and Back To The Future, and Alex Mackie (The Substitute).

The musical score for Judge Dredd was composed by Alan Silvestri, who also provided the music for such films as Mac and Me, Predator 2, Stop Or My Mom Will Shoot, Super Mario Bros., Cop & 1/2, Van Helsing, and Back To The Future.

The Judge Dredd visual effects were provided by the company Mass Illusions, which has worked on films like The Matrix, Event Horizon, Starship Troopers, and What Dreams May Come, among many others.

In 2012, another film adaptation of the Judge Dredd character was made, titled simply Dredd. The film has become a bit of a cult classic, with a dedicated and loyal following.

Apparently, Stallone demanded a number of changes to the Judge Dredd screenplay, mostly to increase the comedy. Cannon, on the other hand, wanted a darker tone for the film more in line with the source material, leading to significant friction on the set. Afterwards, Danny Cannon swore never to work with another Hollywood star. Adding to the friction was the fact that Cannon was a fan of the source material, whereas Stallone wasn’t familiar with the character at all until he was cast, and didn’t give the source any sense of reverence.

One notable change between the film iteration and original comic character of Judge Dredd is the helmet: while the design is faithful, the character in the comics never removes the iconic helmet, whereas Stallone spends most of the film with his face exposed. 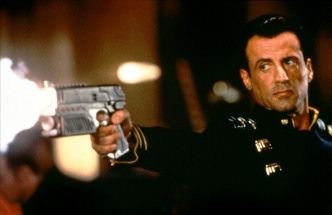 Given the production history of Judge Dredd, there are a lot of alternate casting rumors that have arisen over the years. Reportedly, Joe Pesci was the first choice for Schneider’s role, and Christopher Walken turned down the part of Dredd’s antagonist, Rico. Less surprising in the fact that Arnold Schwarzenegger was considered for the title role of Judge Dredd before Stallone was attached to the project.

Judge Dredd proved to be a significant financial failure: on a budget reported to be as high as $70 million, it only managed to gross $35 million in its total theatrical run. Unfortunately, it was equally as reviled by critics, earning a 18% on the review aggregator Rotten Tomatoes. Audiences weren’t thrilled either, earning it a 30% audience score on Rotten Tomatoes and an IMDb rating of 5.4.

The first and most glaring issue with Judge Dredd is the constant presence of Rob Schneider. Not only is his acting generally bad and the writing for his character not funny, but he doesn’t fit into this film in the slightest. Outside of his presence, the movie has a very serious and violent tone, which he mostly serves to undermine and confuse. According to what I’ve read, Stallone was primarily responsible for Schneider’s role being dramatically expanded, which hits on another big issue with the movie: it was made with two very different visions in mind.

I’m not familiar with the source material that Judge Dredd is pulled from, so I’m not 100% sure what in the movie comes from there and what was written specifically for the movie. Throughout the film, Judge Dredd uses the catchphrase “I knew you’d say that,” which, regardless of whether it came from the comics or not, comes off as clunky and forced on screen (at least in the way that it is delivered).

Much has been said about Armand Assante’s excessive performance as Rico in this movie. While his character is certainly played with more than a little too much enthusiasm, his scenes are by far the most enjoyable parts of the film. If it weren’t for Assante, this would be a much harder movie to sit through.

The set design and effects in Judge Dredd actually look pretty good if you ask me. There’s definitely some influence from things like Blade Runner and Brazil, but it still manages to look unique in a way that works pretty well for the movie. Likewise, the costuming on the judges looks sharp.

Judge Dredd isn’t nearly as bad a movie as I had heard, but it has more than a few serious problems. If someone did a cut of the movie with Rob Schneider cut out, I have a feeling that it would be almost half-decent, as the tone issues and writing surrounding his character make up most of the problems with this movie. Stallone, for all of his issues, has the appearance of Dredd nailed down, so it is hard to say that he was bad casting for the film. Likewise, Assante adds massive entertainment value to the picture, so I have trouble picturing a more reserved performance in that role making the movie any better.

Personally, I think this is a movie worth watching for the experience of it. It isn’t super entertaining or fun, but Assante makes it intermittently entertaining, and the movie has managed to seep into the public consciousness enough to justify being familiar with it. Also, it might help people to appreciate the wonder that is 2012’s Dredd all the more. 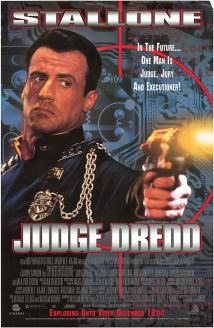