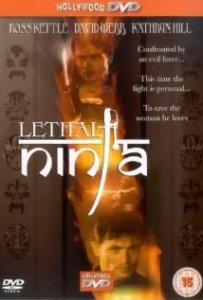 Welcome back to Misan[trope]y Movie Blog! Today’s feature is the first of two movies I will be spotlighting with the inherently redundant title of “Lethal Ninja.”

“Lethal Ninja” was directed by Yossi Wein (under the pseudonym Joseph Wein), and was his first directorial work. He has gone on to direct features such as “Death Train,” “Octopus 2: River of Fear,” and “Cyborg Cop III” over the years, staying firmly within the realm of b-movies. Wein has primarily acted as a cinematographer in his career, working on films like “American Ninja 4” and “Cyborg Cop.” Given his experience, he also provided the cinematography for “Lethal Ninja” instead of having a separate set of eyes for the job. 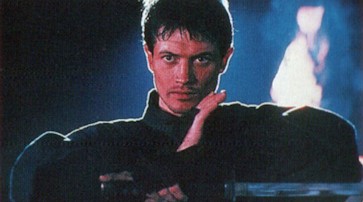 The screenplay for “Lethal Ninja” was penned by Chris Dresser, who curiously only has two theatrical writing credits: one for “Lethal Ninja” in 1992, and another for a movie called “Rogue Lion” from a solid 20 years earlier. What he did in the meantime is anyone’s guess.

“Lethal Ninja” was one of the first productions by Danny Lerner, who would go on to produce films as varied as “Shark Attack 3: Megalodon,” “Olympus Has Fallen,” “The Legend of Hercules,” and the sequels to “The Expendables” before his recent death in March of 2015. He manged to accumulate nearly 100 producing credits over his career, which consisted primarily of b-movies and low-budget features.

The cast of “Lethal Ninja” in packed full of anonymous b-movie players, led by one Ross Kettle as an American ninja named Joe Ford. The story follows Ninja Joe on a journey to a hostile African nation, where is archaeologist wife has been kidnapped by a crime organization. For reasons that aren’t entirely clear to me, he decides to take a sidekick along with him, who shockingly manages to live through the entire movie.

“Lethal Ninja” currently holds a 3.2 score on IMDb, which is hardly a glowing endorsement. However, most of the reviews I have seen recognize that this is at least an entertaining movie for what it is, but I don’t think anyone denies the low quality of the work.

Personally, I feel like “Lethal Ninja” is far from unoriginal, and deserves some credit for that. Many people specifically remember the “roller blades” sequence, which I actually didn’t hate. It was just about the only action sequence in the whole movie that looked any good, outside of the final battle on top of an oil tower (and even that was pretty limited). That said, this movie is very aware of what it is: mindless ninja action. And, thankfully, it mostly delivers. However, the movie isn’t particularly memorable overall, despite the roller-blading and a pretty hammy villain.

If you know that ninja movies are your thing, then “Lethal Ninja” isn’t going to disappoint you. However, I am kind of mixed on whether to recommend this to other audiences: there are definitely better / more entertaining ninja flicks out there, but this one isn’t awful. The one that I absolutely recommend is watching the roller-blading sequence, which I promise makes no more sense in the context of the film.