It may come as a bit of a surprise to some, but I don’t actually make it to movie theaters particularly often. I spend most of my time digging around through used DVD bargain bins and looking for deep cuts online, and it tends to be a much cheaper way to find much worse movies in general. However, sometimes a movie will hit theaters that gets my attention. So far this year, one in particular caught my eye and got me out to the big screen. 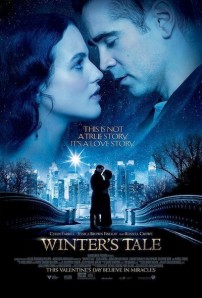 This was the feature directorial debut for Academy Award-winning writer Akiva Goldsman, and is also the worst thing he has been involved in since he penned the pun-saturated script for “Batman & Robin”.

“Winter’s Tale” is a highly well-produced, visually striking, rambling assortment of nonsense. If I hadn’t known Akiva Goldman did the screenplay, I would have sworn that Deepak Chopra had a hand in writing the dialogue.

The story is as vapid in content as it is vague and enigmatic in details, which leaves viewers not familiar with the acclaimed source material very much out of the loop. There is a point early in the film where Russell Crowe’s antagonist character mentions in passing to a perplexed henchman that Colin Farrell’s magically-appearing (and flight-capable) horse is actually a dog. When the henchman inquires further, he is shot down by Crowe as if it were foolish to question the claim that the magic horse is actually a dog. That is kind of what sitting through the film is like: it sporadically spurts nonsense claims and dialogue, and doesn’t care if the audience is following along or not. As a general rule, you should aim for your film to make more sense to the casual observer than “Donnie Darko”, at least if you you are trying to sell it to a general audience.

I don’t want to spoil the many, many entertaining nonsensical occurrences in this movie for anyone who hasn’t seen it, but I can guarantee that this is going to be a film that will be recalled for quite some time in discussions of big budget bad movies. It doesn’t even sound like it has the excuse that “47 Ronin” did of behind-the-scenes turmoil: this film is just the product of pure incompetence. Specifically, I think that incompetence on the part of the writing and directing is primarily to blame here. So, Akiva gets all the credit for this disasterpiece. 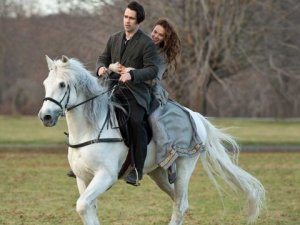 Without spoiling too much, let’s go through some highlights that actually happen over the course of “A Winter’s Tale”:

-character orders a spotted owl in a fancy restaurant

-magical tuberculosis with no physical effects, not contagious

-magical horse is actually a dog

-Satan is a Jimi Hendrix enthusiast

-everyone gets exactly one (1) miracle

-character turns into a snowman upon death

-the tearing off of a man’s face, after which a character plays with his blood

-polite romantic conversation over tea with a home invader

-baby is abandoned in the ocean inside of a model boat

-uncredited, plot-important cameo by a famous actor who has no business doing a bit role in this movie

-riding a horse into space

The whole movie layers ridiculous dialogue onto preposterous premises, and fails to create the magical realism style that was needed for this story to work. It appears that all of the actors take their roles seriously, which enhances the unintentional comedic effect for the movie in my eyes. In particular, Russell Crowe’s performance is completely ridiculous. There are moments where he sounds like a drunk, evil leprechaun. Despite how poorly it comes off, I think he was actually trying at the role, but it winds up being a scenery-chewer through and through despite what I can’t help but assume was a serious effort. 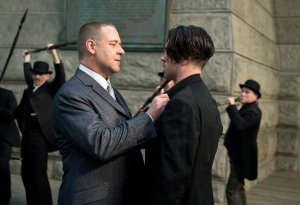 The movie is going to be coming out on DVD in June, but in the meantime I recommend checking out the many reviews that have come out about the movie. How Did This Get Made? did a good episode on it, and The Cinema Snob’s Midnight Screening was a blast if you ask me. If I recall correctly, they both go into spoilers though, so be warned.