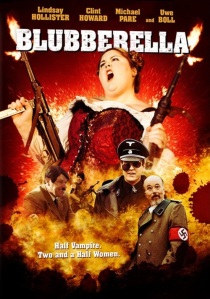 “Blubberella” is yet another entry in the IMDb Bottom 100 brought to us by the much-maligned director Uwe Boll, who was also behind IMDB Bottom 100 flicks “Alone in the Dark” and “House of the Dead”. His immense unpopularity as an individual (among critics and audiences alike) is almost as notable as his his astoundingly awful filmography at this point, something that has certainly had an effect on the public perception of his works. Given that the IMDb Bottom 100 is in many ways based on popularity and public opinion, it is no surprise to see Uwe Boll pop up numerous times in the ranking.

However, “Blubberella” sets itself apart from the typical Uwe Boll fare: not only is it a comedy (not Boll’s strength), but it is also a parody movie. If there is anything that the IMDb Bottom 100 can tell you at first glance, it is that parody movies can go wrong very easily, and Uwe Boll certainly isn’t Mel Brooks when it comes to the craft of cinematic comedy.

Adding to the bizarreness, “Blubberella” is a parody of a Uwe Boll flick that was being filmed simultaneously (“BloodRayne 3”), so it isn’t even aping a movie that the audience would identify with.  According to some behind the scenes footage, this was a decision made first and foremost to save money: Boll’s logic was that it would cost the same to make two movies at the same time with the same sets, cast, and crew. In theory, if both movies did well, the profits would be exponentially better. This is an old principal that dates back to the classic Roger Corman B-movies, but those films were usually unrelated apart from the cast and setting: they weren’t designed to be symbiotic.

Personally, I feel that Uwe Boll’s already unpopular personality combined with this economic motivation for the making of the film would have led to a negative perception of “Blubberella” regardless of whether it was any good or not. Unsurprisingly, though, it is absolutely awful. Not only is it the worst Uwe Boll movie in the IMDb Bottom 100, but I personally think it is the worst parody movie as well. That put it is some truly elite company. 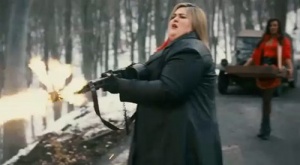 The humor in “Blubberella” is not just crass and lazy (just as with the other parody movies in the IMDb Bottom 100, it relies heavily on stereotypes), but it also comes off as generally cruel and bitter. I think just about every joke in the movie punches down, which is generally a poor practice and sets a thoroughly uncomfortable tone to the movie. By the end of the movie, it is pretty clear that Uwe Boll not only isn’t funny, but that he has a lot of personal ire for women, homosexuals, and fat people (not to mention pretty much everyone else). He comes off as even more of an asshole than everyone already believed he was.

Another huge issue with the humor in “Blubberella” comes from the fact that the movie is effectively unscripted: Uwe Boll left an excessive amount of the dialogue up to the actors to improvise (the two lead actors apparently did enough of this to justify co-writing credits on the film). Shows like “Curb Your Enthusiasm” can pull off this style of improvised scripting because of the comedic talents of the players, but it definitely requires a lot of skill from everyone involved for the technique to work. If you haven’t seen poorly done improv before, I assure you that it is some of the most uncomfortable, miserable comedy you will ever come across. In the case of “Blubberella”, the actors just aren’t up to the improv weight that is thrown on them by Boll. In the behind the scenes interviews, it seems like the actors are appreciative of the freedom that they were granted with this style, but I highly suspect that Boll made the decision to go with improv dialogue because he didn’t want to waste the time writing a fleshed out script (time is money, after all). In any case, it doesn’t work, and the end result is poorly paced and painfully unfunny.

As far as the cast goes, the only real bright spot is beloved oddball character actor Clint Howard, and even he doesn’t perform up to his usual par. Worst among the cast list by a mile, however, is Uwe Boll himself, who portrays Adolph Hitler. To put it lightly, his acting is atrocious.

There is nothing to recommend about “Blubberella”: it is a creature spawned from hate-based humor and cheap economic logic. The pacing and comedic timing throughout the film is just awful, and there aren’t any redeeming performances or aspects that can justify sitting through the flick. Worse yet, you can tell how rushed the production was, and it is evident that there was no effort put forth to make this movie. Unless you are planning to watch all of Uwe Boll’s movies for the challenge of it, I would definitely avoid “Blubberella”.