Yesterday, I decided to check out a local VHS market that I heard about recently. Tucked away in the back of a semi-dilapidated building, boxes upon boxes of VHS tapes were laid out on tables, brought in from people all around the region. I usually stick to DVDs, but I wasn’t about to pass up this opportunity to find some rarities and flicks that haven’t made the jump to a disc or streaming release. And, sure enough, I found some cool stuff. 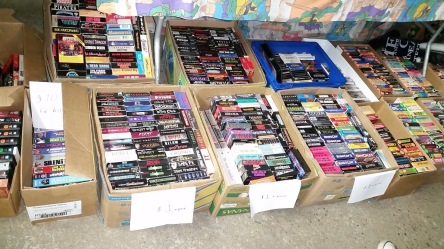 On to the actual haul: here is a shot of all of the tapes I procured together. You can look forward to a good number of these popping up here on the blog for full reviews before too long, particularly the Larry Cohen flicks (“Deadly Illusion” and “Perfect Strangers”). 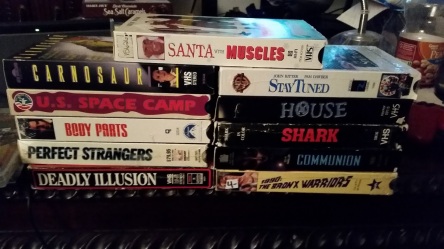 I’ve covered this Hulk Hogan holiday flick before at length, but I couldn’t pass up the opportunity to finally snag a physical copy of it. This might be the only Mila Kunis movie worse than “American Psycho 2.”

“Carnosaur” was Roger Corman’s answer to “Jurassic Park,” and is a flick that I have been meaning to catch for a long time. I’ve seen a bunch of clips from it over the years, and can’t wait to see that adorable little dinosaur in action. Interestingly enough, I also almost picked up “Tammy and the T-Rex,” but decided against it. 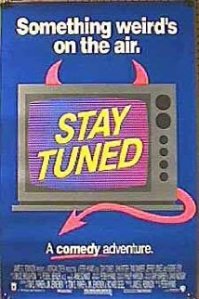 I first heard about “Stay Tuned” from an episode of “We Hate Movies,” and the concept behind the story sounds pretty interesting to me.I mean, of course Satan would be involved in show business somehow, right? 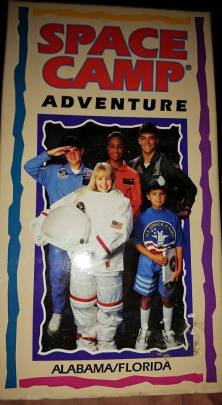 This is a promotional video for Space Camp from 1994. From what I can tell, it was made at least in part in my home town of Huntsville, AL. At the very least, this is going to be packed with some solid nostalgia fuel. If it is anywhere near as ridiculous as the movie “Space Camp,” I will be very happy. 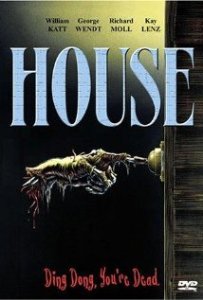 “House” is a bit of a horror-comedy cult classic, but it is one that I have never actually gotten around to before. I’m expecting it to be very much up my alley, though. I mean, Steve Minor directed “Lake Placid” and “Soul Man,” so surely this is going to be on point! /s 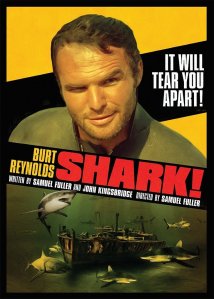 “Shark” is a Samuel Fuller flick with a lot of interesting back story. A stunt worker was killed by a shark during the production due to a tragic error, and Fuller ultimately abandoned the production entirely due to the producers’ shenanigans. The film is supposedly awful as a result, in spite of a hefty dose of Burt Reynolds in the lead role.

“Perfect Strangers” is a Larry Cohen movie that I don’t know much about, but it has not been easy to track down thanks to the immensely generic and oft-used title. The fact that it has been such a pain in the ass to find leads me to believe this is probably one of his lesser films as far as quality goes, but I might be surprised.

I didn’t know anything about this movie until after I bought it. You have to take risks in life sometimes, and I am willing to gamble on a movie about Christopher Walken being abducted by aliens. The director was apparently responsible for a couple of the sequels to “The Howling,” as well as something called “Pterodactyl Woman From Beverly Hills,” so I think I may have a winner here.

“Deadly Illusion” is another one of those Larry Cohen films that has been a pain in my ass to track down. It stars Billy Dee “Lando” Williams and Vanity (which is awesome), but it is apparently not about a serial killer magician like I had initially hoped. Still, I always have high hopes for Larry Cohen to pull out the stops to create an interesting story. Maybe a magician will be involved after all.

I have heard an awful lot about “1990: The Bronx Warriors,” and all of it leads me to believe that I am in for something special with this thing. Fred Williamson’s presence gets my attention for just about anything, but just look at that ideal box art. It is “The Warriors,” but with less money and more nonsense. Perfect.