Crushing the Conspiracy of the Cheater 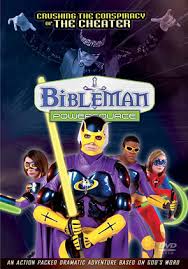 2007’s “Crushing the Conspiracy of The Cheater” marks the third episode of the third and final incarnation of the Bibleman franchise: “Bibleman: Powersource.” Robert Schlipp stars once again in the lead role of Bibleman.

“Crushing the Conspiracy of The Cheater” was directed by Steve Gilreath, and written by Michael Nolan: both of whom are regulars behind the scenes on the “Powersource” series.

The central villain of the episode is The Cheater, who was previously introduced in “Terminating the Toxic Tonic of Disrespect” in a flashback. The episode also features two accessory villains, played by radio personalities Rick & Bubba. Predictably, they are a radio-themed dastardly duo called The Whine Brothers.

Bibleman is once again joined by his allies Cypher and Melody in “Crushing the Conspiracy of The Cheater,” and Biblegirl also finally makes her physical return to the series after being absent for two episodes.

The story of “Crushing The Conspiracy of The Cheater” focuses on a plot by the villain known as The Cheater to trick young Christian students into cheating on their schoolwork, as well as a local Bible Bowl. L.U.C.I., the evil supercomputer, manages to steal all of the answers for the Bible Bowl from U.N.I.C.E., and The Cheater then distributes them via a hotline. Of course, Bibleman and company catch wind of this, and aim to stop The Cheater and teach the children a lesson about being honest and not trusting strange men that show up at your school.

First off, The Whine Brothers are very perplexing creatures. They are played by the radio hosts Rick & Bubba, so it is no surprise that they have a radio theme. However, their appearance is just bizarre: they look like Elvis impersonators with bullhorns on their ears and microphones spouting from their necks. Also, their evil plan is to make children whine a bunch? Don’t they pretty much do that anyway? Also, one of them definitely uses a cheap air blaster as a weapon, which gave me a lovely flashback to “Santa Claus Conquers The Martians.” 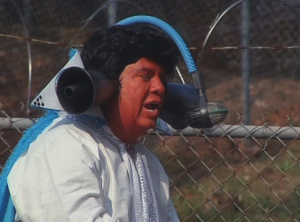 Also, in Bibleman tradition, both of The Whine Brothers explode violently, with Bibleman taking one of them out in a classic Obi Wan vs. Darth Vader move. This is actually more directly violent than he usually is, as he typically deflects blasts back at villains to kill them. Likewise, The Cheater ultimately takes a stab to the gut at the end of the episode, marking two pretty dramatic kills for Bibleman in one story. Or, rather, it would have: The Cheater somehow survives due to his Ant-Man shrinking device malfunctioning from the blow. 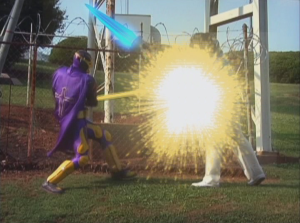 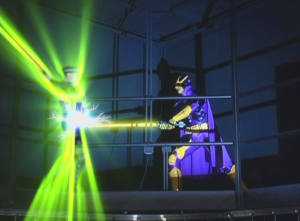 Clearly they needed to fill time in this episode, because there is a sequence where Bibleman operates heavy machinery in order to dispose of the evil gadget being used by The Whine Brothers. Usually this is glossed over, but apparently in this episode it was important that the audience see that Bibleman can operate a backhoe. 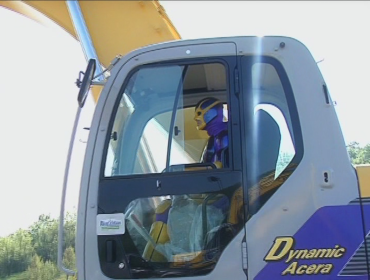 One of the main child actors in the episode is absolutely awful, and has very thick southern drawl that is absent from any other character. I don’t know how anyone thought it was a good idea to put him on screen, much less give him a primary speaking role. The best I can guess is that he was related to someone in the production, because there isn’t anything quite as traditionally Christian as nepotism.

In regards to The Cheater himself, I am really confused how nobody spotted this guy walking into a school? Because he might be the least subtle villain in the show thus far. I was reminded a little bit of The Wacky Protester in “A Fight For Faith,” who abducted children from a church without being questioned, while carrying a box labeled “evil.” 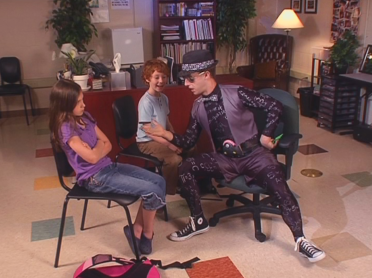 Speaking of the villains, how does L.U.C.I. keep bouncing from villain to villain? She has been in every episode of Powersource thus far, without any explanation of how she was discovered after the fall of The Wacky Protester, or how she is coming into the possession of the various villains of the series. The transition from Luxor Spawndroth to Primordius Drool was at least sensible, and adequately explained the transition of the computer. No such luck here.

This episode is a pretty solid recommendation from me. The Cheater is probably the most over-the-top adversary in the franchise next to The Wacky Professor, and every second he is on screen is a joy. The radio bad guys are also super-cheesy, and seeing Bibleman inexplicably operate heavy machinery is just golden. The story itself is kind of dull, but there are certainly some highlights here.

2 thoughts on “BibleMan: Crushing the Conspiracy of the Cheater”