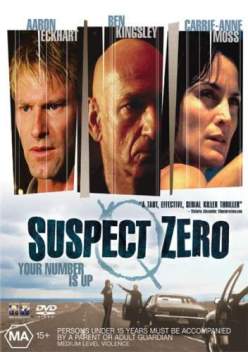 The director on Suspect Zero was E. Elias Merhige, who was also behind films like Shadow of the Vampire and Begotten, but hasn’t made a full length feature since the release of Suspect Zero in 2004.

The cinematographer for Suspect Zero was Michael Chapman, whose shooting credits range from massively influential films like Raging Bull, Taxi Driver, and The Last Detail, to cult classics like Scrooged and The Lost Boys, to popcorn flicks like Kindergarten Cop, Space Jam, Ghostbusters II, and Evolution.

The score for Suspect Zero was composed by Clint Mansell, who is known for providing memorable music for films like Black Swan, Moon, The Wrestler, Requiem for A Dream, and Pi. 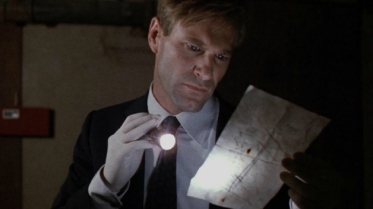 Zak Penn’s initial screenplay for Suspect Zero reportedly started circling Hollywood in 1995. Over the years, notables such as Paul Schrader, Sylvester Stallone, Ben Affleck, and Tom Cruise all expressed interest in the project before it actually made it to the screen. Cruise even stayed on the film as a producer through his production company, though his name specifically doesn’t appear in the credits.

Suspect Zero was made on a budget of $27 million, though it only raked in $11.4 million in its worldwide theatrical release. The reception at the time was relatively negative: it accrued Rotten Tomatoes scores of 18% from critics and 38% from audiences. However, time has been kinder to the film, and the IMDb rating (which is updated more consistently frequently) has risen to a 5.9. 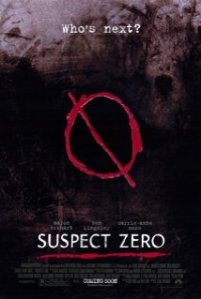 Suspect Zero definitely suffers from the inevitable comparisons to David Fincher’s Se7en, which is by all accounts a much better movie. Most of the criticisms I have read at least mention the stylistic similarities if nothing else. However, the movie deserves to be considered on its own merits, and I think the time and distance from Se7en has allowed that to happen. Still, the movie is far from flawless.

First off, a number of the surreal ‘vision’ sequences seemed way too forced to me, and I never got on board with the idea of using thermal ‘Predator-vision’ to indicate the psychic sequences. It just seemed to me that there had to be a better way to get across the idea of remote vision without resorting to what basically amounted to a night vision filter.

As much as I like both Aaron Eckhart and Ben Kingsley, neither of them put in consistently impressive performances in this flick. However, I think that has far more to do with the way that the characters are written over anything they could do. None of the characters have much in the way of personality in this movie, and there isn’t much to them beyond their explicitly-stated back stories, which is a real shame. There are flashes of interesting chemistry between the two actors, but it never totally clicks.

Likewise, the screenplay for Suspect Zero isn’t particularly effective at telling its story. It gets the point across, and the audience gets from A to B eventually, but there isn’t a whole lot of depth to it beyond the basic road map. Visually, the movie is pretty interesting, and it almost makes up for some of the weaknesses in the writing. However, even that goes overboard, as I mentioned with the ‘Predator-vision’.

As far as positives go, I’m a big fan of the score to this movie, and how it is used to create discomfort and tension throughout the film. Mansell always seems pretty good at that, and he really gets to show off his creepy composition skills here.

Overall, I think this film gets an unwarranted bad reputation. It isn’t great by any means, but I think people were particularly weary of Se7en imitators at the time. It is a bit slow and arty in its aesthetic for the casual movie-going crowd, but if you are interested in dark cop/serial killer films, this is definitely one worth checking out. I feel similarly about The Cell, which came out a handful of years earlier, though that film is far more surreal, and nearly unbearably pretentious. It also makes Suspect Zero look comparatively coherent.

If you are a big fan of The X-files and True Detective, Suspect Zero might hit the perfect middle ground for you in terms of both style and substance, just don’t go in expecting anything Earth-shattering.