The Hottie and The Nottie

“The Hottie and The Nottie” has been sitting at the bottom of the IMDb Bottom 100 for quite some time. If it weren’t for the current “Gunday” situation, it would still be holding the #1 spot. Given that this is a Paris Hilton movie, I had a pretty good idea of what to expect out of this thing content-wise. However, I was curious going in as to how this movie compares to her other (many) appearances in the list, such as “Pledge This” and “The Hillz”. Oddly, I didn’t find this movie to be dramatically worse than those in any way.

Of course, the message in this movie is abysmal. Essentially, it is an “Ugly Duckling” tale that reinforces the idea that a character/person does not have value until/unless they are attractive. It also presents the audience with one of the most unintentionally reprehensible protagonists I’ve seen in a movie: the writers don’t seem to realize that they have crafted a complete scumbag of a character, and assumes the audience is on board with him throughout the movie.

The plot follows a guy (Joel David Moore, the fellow on the right above) who is attempting to land the girl of his (primary school) dreams, who is played by Paris Hilton. He is hindered by the fact that she has a protective, unattractive best friend, and by the mostly unaddressed fact that he compulsively lies constantly about everything. The plot wants us to believe that only one of those is a real obstacle. In any case, he spends a significant portion of the movie being grossed out by the unrealistically enhanced ugly friend while trying to scheme ways to dispose of her, all while continuing to lie his way into a pseudo-relationship with the Paris Hilton character.

The plot takes the predictable “Ugly Duckling” turn when the ugly friend has cosmetic/dental surgery, after which the lead suddenly realizes he prefers her to Paris Hilton’s character. Instead of having to deal with a realistic comeuppance for the shit he pulls throughout the movie, he pretty much gets exactly what he wants. I basically finished the movie by declaring: “What a fuckhead”. 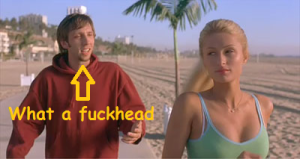 All of that said, this movie’s failings were mostly limited to the writing and the makeup. I don’t recall any massive technical errors, like the sound editing and cinematography wackiness of “Pledge This!”.  As I mention in the video review, if this movie is put on mute without subtitles, most of the problems disappear (outside of what story you can pull from the visuals). Then again, I’m also definitely not re-watching this. “Pledge This!” had a couple of pure “WTF is happening?” moments to make it bizarrely entertaining in bursts, but “The Hottie and The Nottie” is devoid of any of that. All of the “humor” falls flat (as you would expect), Paris Hilton can’t act (as you should know), and the story is as sick as it is cliche. All of the mild technical competence behind the scenes can’t make up for the atrocious writing here, so even though this is technically a better crafted movie than “Pledge This!”, I’m tempted to say that “Pledge This!” is more watchable overall.

Still, I don’t think this deserves the top slot in an accurate Bottom 100 movies list. It was hard to sit through, but no more difficult than any of the “Movie Movies”, and it is certainly not as incompetently made as “The Maize” or “Birdemic”. I’m honestly not sure how this movie specifically drew the ire of the IMDb voters: while the writing and the story are abysmal, nothing made this movie stand out to me among the other IMDb Bottom 100 comedies. It certainly isn’t anywhere near being good, and I am definitely not recommending it, but I can’t help but disagree with the IMDb voting herd on this one. In my opinion, there is another Paris Hilton movie that deserves that kind of ire, but I’ll get to “The Hillz” later.

4 thoughts on “IMDb Bottom 100: The Hottie and The Nottie”