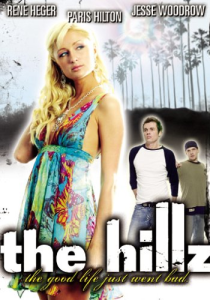 “The Hillz” has been perhaps my least favorite film from the IMDb Bottom 100 thus far. It isn’t the worst of the list (though it is certainly high up there) in terms of film-making incompetence, but the writing, dialogue, and general tone of the film are all incredibly revolting. The sheer vapidness of the screenplay puts a thin coating on top of the immense quantities of sexism, homophobia, transphobia, and pretty much every other shitty quality a thing can have. I would venture to say that absolutely anyone could be offended by something in this movie. One particular sequence that comes to mind is the ‘humorous’ story of “Monster Head”, in which a transexual prostitute is murdered mid-fellatio by one of the central characters. Lol.

“The Hillz” presents the audience with an incredibly forgettable and thoroughly reprehensible cast of characters, including a dull college baseball star lead who is infatuated with an inconsistently-written Paris Hilton who plays his best frenemy and perplexing love interest. He also has a group of close friends who he smokes crack with on occasion, and who operate a criminal empire comprised of robbing Beverly Hills mansions at house parties and executing people for $80 debts.

The one saving grace in regards to the character cast of “The Hillz” is that they are mostly corpses by the time the story comes to its abrupt conclusion. I don’t want to assume that this ending was karmic repayment for their general shittiness, because the movie never particularly gave me the sense that they did anything wrong in the storytelling (they very obviously did, but I only know that because I have some sense of right/wrong, not because the movie conveyed it).

All of the actors are absolutely miserable in this movie, with the notable exception of the fellow playing the gang leader with a notably violent temper (the one who killed “Monster Head”). The character is one of the most horrid I’ve seen put to screen, but the actor really does his best to sell it. That is more than can be said for anyone else on screen throughout the run-time of this movie.

The editing in “The Hillz” definitely goes a long way towards setting it apart from the herd. This movie would have been horrible based on the writing and acting alone, but the astoundingly incompetent transitions are mind-blowing. I think that this movie was edited in Windows Movie Maker, and the editor just used random transitions available in the program. There is at least one instance where a star transition is used, and those always look awful.

One thing that is worth pointing out about this movie is that, despite the trailer and all of the marketing materials, Paris Hilton does not feature prominently in the movie. She doesn’t have any relevance to the primary plot, and sort of floats around the edges of the movie as a source of frustration for the main character. I honestly don’t much care about deceiving people who would watch a movie solely for Paris Hilton, so that marketing deception is a pretty minor gripe in my book.

Last I checked, “The Hillz” was just about to fall out of the IMDb Bottom 100, which really does surprise me. This is more incompetent and offensive overall than either “Pledge This!” or “The Hottie and the Nottie”, two other Paris Hilton movies that tend to hover around the top 10 on the list. My guess is that this is primarily due to the relative lack of exposure of “The Hillz” in comparison to either “Pledge This!” or “The Hottie and the Nottie”, because I can’t believe that anyone would objectively regard those as worse movies than this piece of work. There are only a handful of IMDb Bottom 100 movies that I think of as mechanically worse than “The Hillz” (“Ben and Arthur”, “The Maize”, and “Birdemic” immediately come to mind), but none are as thoroughly offensively written as it. In the words of the late Roger Ebert: I hated, hated, hated this movie.

If you are interested in reading more about “The Hillz”, check out this review from the Something Awful forums.