Cruel Jaws was directed, edited, and co-written by Bruno Mattei, an infamous b-movie creator who has been behind movies like Strike Commando, Hell of the Living Dead, Zombi 3, and Robowar. Interestingly, he used more than one pseudonym for Cruel Jaws: ‘Andy Lamar’ for the editing credit, and ‘William Snyder’ for the writing and directing credits.

Nearly the entire cast and crew of Cruel Jaws outside of Mattei have little to no other film credits, which isn’t particularly surprising given the ultimate product of this movie.

The plot of Cruel Jaws follows the formula of Jaws pretty closely: a tourist town is terrorized by a killer shark during peak season, and is pushed to the brink of financial ruin due to the negative press. The local sheriff has to team up with a shark expert to try and stop the murderous carcharodon.

Cruel Jaws extensively uses stock footage from other shark movies, including Jaws, Jaws 2, and even the Italian Jaws knockoff The Last Shark, which makes Cruel Jaws a rare ripoff of a ripoff.

Cruel Jaws is a pretty obscure knockoff flick, but the people who have come across it certainly haven’t liked it: it currently boasts an IMDb rating of 3.0 from just over 400 users. 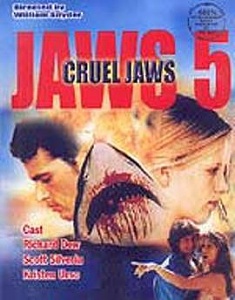 The extensive use of stock footage and shots ripped from other films means that the shark attacks themselves play pretty awkwardly in Cruel Jaws. Obviously, you can’t show a shark from a different movie attacking characters in your movie, because you don’t have the shark. The result, as you would expect, is far less than ideal.

There is an odd subplot in Cruel Jaws about a theme park, which I think only exists as an attempt to knock-off Jaws 3-D, which isn’t particularly beloved to start with. This side plot also features a precocious child actor, who might be the most terrible and annoying performance in a film packed to the gills with terrible and annoying performances.

There is a ton of dialogue that feels completely ripped out of the original Jaws, making this maybe the most blatant knockoff of the classic movie I have ever seen. It goes beyond just lifting the broad strokes of the plot (like The Last Shark), and goes so far as to feature entire conversations are almost identical to Jaws, particularly from the Hooper analogue.

The musical score for Cruel Jaws is absolutely all over the place. You would probably assume that it would knock-off Jaws with the score, given how iconic and recognizable it is. However, perplexingly, that isn’t the case. There is one memorable moment as the intrepid heroes are setting out to sea for their shark hunt when the music is almost a direct ripoff of, believe it or not, Star Wars.  I suppose the filmmakers deserve partial credit for at least ripping off John Williams?

Overall, this is a pretty dull flick in my opinion. However, it has moments of genuine entertainment thanks to the awful acting an awkward use of stock footage. For die hard Jaws fans, hopefully this movie is as close as we will ever come to seeing an honest remake of the classic film. If you know the movie by heart, Cruel Jaws might be a wee bit more fun for you, particularly if you make a drinking game out of all of the times something is lifted from the original.