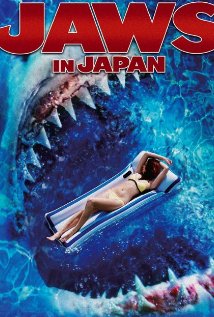 Today’s feature is a 2009 Japanese “sequel” to the 1975 super-smash, Jaws. Appropriately, it is commonly known as Jaws in Japan.

Jaws in Japan was written by Yasutoshi Murakawa, who also penned a movie called Iron Girl: The Ultimate Weapon, which I kind of assume is a Japanese Iron Man sexploitation knockoff (but I’m not planning to find out if that is true or not.)

The director for Jaws in Japan was John Hijiri, whose only other major credit is a Japanese TV series called Girls Be Ambitious.

The Jaws in Japan cinematographer is the most experienced member of the crew that I came across, Yasutaka Nagano. He has shot such films as The Machine Girl, a segment in The ABCs of Death, and something called RoboGeisha.

The editor for the flick was one Masakazu Ohashi, whose credits include X Game and the TV show Girls Be Ambitious under director John Hijiri.

The producers on Jaws in Japan were Kyosuke Uen (Grotesque, Geisha Assassin) and Rie Mikami, who only has two other listed credits on IMDb, neither of which have five votes as of yet. 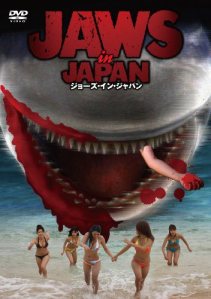 The visual effects for Jaws in Japan were provided by Tsuyoshi Shôji, who recently provided effects for an undeniably Japanese movie called Schoolgirl Apocalypse.

Jaws in Japan stars one Nonami Takizawa, who, according to wikipedia:

is a Japanese gravure idol, and a female talent. She is best known for her voluptuous figure. She is from Saitama, and her nickname is ‘Nonamin’.[2] She retired from modeling as of 2011.

You might notice that ‘acting’ isn’t specifically mentioned in that blurb, which I don’t think was a mistake on the writer’s part.

The plot of Jaws in Japan follows two young college students on vacation at a resort island. However, not all is well in the apparent paradise, as both a serial killer and a murderous shark may be hunting in the area.

Jaws in Japan is also known by the alternate title of Psycho Shark, which was used for its United States home video release. For its release in Japan, it was actually marketed as a direct sequel to Jaws, though I somehow doubt that fooled anyone.

The reception for Jaws in Japan was overwhelmingly poor. The movie currently holds a 1.7 rating on IMDb, alongside a 1.2/5 average audience score on the review aggregator Rotten Tomatoes.

First off, Jaws in Japan is clearly a work of amateurs (or immensely untalented people, but I’ll be optimistic), because it is pretty much garbage film-making across the board. As I’ll get into in a minute, there are brief flashes of promise in the concept of the movie, but pretty much every aspect of the execution of it is abysmal. The acting is nonexistent, and I would wager that there wasn’t a screenplay of any kind for this film. Most of the movie is either repeated camcorder footage of nonsense, shots of girls watching that camcorder footage, shots of girls on beaches, shots of girls in showers, or shots of girls in bed doing and saying nothing. With the exception of the finale sequence, pretty much nothing happens throughout this entire movie. In short: it is paced poorly, shot poorly, looks terrible, sounds terrible, and might be the most boring movie I have ever seen.

Adding a whole extra layer to the film is the fact that this is an exploitation flick in just about every conceivable way. Not only are bikini shots constant (there is more dialogue about bikinis in this movie than about sharks or serial killers), but there are also random sequences ripping off everything from Psycho to The Ring.

The idea behind the story of Jaws in Japan has at least some promise if you ask me. The concept of a remote beach resort being terrorized by a serial killer, and the only clues left behind being guests’ camcorder tapes, could have made for an interesting thriller flick (a few decades ago). However, totally wastes that concept with its ineptitude.

I honestly think the shark was added into this movie after the fact. This is a shitty thriller found footage flick about a serial killer stalking around a remote beach resort, and the producers must have realized it was too boring for anyone to possibly watch it. So, they threw a CGI shark in two scenes and labeled it a Jaws movie. I can sort of understand the parallel of the serial killer picking off beach-goers like a shark, and that might have promise in a different context, but that clearly isn’t how this movie was pitched. I kind of wish more information was out there about this movie, because I honestly want to understand how on Earth this film came to be, like an investigator trying to piece together the scraps after an airplane crash at sea.

If there is anything that I can say confidently about this film, it is that it is boring. In a movie that is barely over one hour, there is a nearly endless amount of unnecessary footage in it. The footage isn’t even extraneous plot: it is just nothing. It is primarily home video footage of a shitty vacation, often times played multiple times. Other sequences just drag on for seemingly minutes too long without anything of note happening or being said. Because of this, Jaws In Japan is one of the most boring and incompetent movies I have ever sat through, up there with IMDb Bottom 100 flicks like The Maize.

Overall, this feels like an amateur art movie that was “spiced up” with the addition of a CGI shark, and was marketed as a silly Jaws knockoff. However, it is actually an unwatchably slow thriller composed of handheld camera footage of women in bikinis doing nothing. If you have enemies that you want to hurt with a movie, this is one that you can consider as a weapon. Just tell them that it is a shark movie, and watch them wait the entire run time for something (anything) to happen.

All of that said, the finale sequence is pretty hilariously terrible.

One thought on “Water Foul: Jaws In Japan”