The cinematographer on Star Knight was Jose Luis Alcaine, whose credits include a number of acclaimed Spanish films like Volver, Bad Education, and The Skin I Live In. 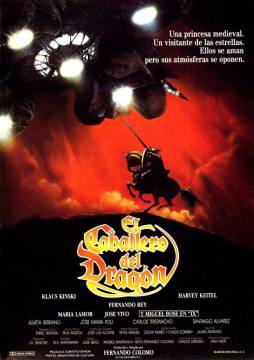 The special and makeup effects for the movie were provided by Jose Antonio Sanchez (Firestarter, Conan The Barbarian, The Golden Voyage of Sinbad, Solarbabies) and Reyes Abades (Pan’s Labyrinth, Sexy Beast, The Devil’s Backbone).

The musical score of Star Knight was composed by José Nieto, who also provided music for movies like Mad Love, Carmen, Lovers: A True Story, and Dias Contados.

The plot of Star Knight is summarized on IMDb as follows:

When a dazzling craft illuminates the sky above a medieval European village, the townspeople fear mayhem while the ruling party prepares for battle with the mysterious “dragon in the sky.” After Princess Alba is discovered missing, the quest for power and the young girl’s affections drive Klever to free her from the strange cosmic knight. But is that her desire? Worldly boundaries are crossed in this gothic sci-fi tale of power, greed and the universal language of love. 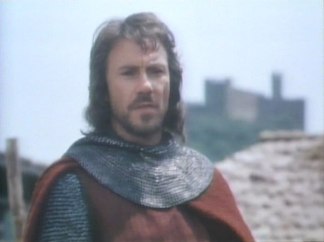 Currently, Star Knight is in the public domain, meaning that the lack of rights-holders makes it readily available through a number of different mediums for minimal or no costs.

Star Knight currently holds a 3.9 user rating on IMDb, along with a 24% Rotten Tomatoes audience score. However, the movie is certainly quite obscure, with less than 1000 reviews counted between both popular review sites.

If there is anything to say for Star Knight, it is that the concept is certainly imaginative. The idea of combining medieval fantasy with science fiction is something that I am sure has been done before, but it certainly isn’t an idea that you see very often executed on screen.

Klaus Kinski and Harvey Keitel are two fantastic actors with enviable careers, but in 1985, they were both far from the heights of their powers. Harvey Keitel would ultimately be the first (but not last) career resurrection for Quentin Tarantino with his memorable performance in 1992’s Reservoir Dogs, but before that, he had long been relegated to supporting roles in movies like Off Beat and Wise Guys throughout the 1980s. Kinski, on the other hand, spent most of the 1980s after Fitzcarraldo popping up in European b-movies like Creature, Android, and Vampire In Venice, though he did collaborate once more with Herzog (Cobra Verde) in 1987, and closed his career with a passion project (Paganini) in 1989.

Keitel didn’t strike me as very comfortable in the role of a knight in this movie. Harvey Keitel is very good at playing roles like cops, robbers, tough guys, and gangsters, but a medieval knight is a little outside of his typical purview, and it shows. I feel like this movie might have been cast on a “first available” basis when it came to recognizable names, and Keitel happened to have the necessary low standards and high recognizability to make the cut, in spite of how poorly he fit the role.

Kinski, on the other hand, really fits his role well: he plays a Merlin-esque mystic character, who believes the alien character (played really interestingly by Miguel Bose) is an angel sent to save the land.  For what it is worth, he also didn’t strike me as phoning in his performances: he puts in some genuine effort, in spite of the film’s outlandish concept and low budget.

Overall, I had a lot of flashbacks to Slipstream (1989) while watching Star Knight: there are some really cool ideas in this movie, the cast is pretty compelling, and the performances aren’t totally awful (the miscasting of Keitel is the exception). The effects leave a bit to be desired, but the movie looks pretty good from a design standpoint, and is shot with a decent eye. However, it is really the pace of the movie that damns it at the end of the day, and that is all it takes for a potentially good movie to go bad. There are few too many minutes of downtime, and some some odd fumbling attempts at humor that throw the tone off. Worse yet, there isn’t much capitalization on the atmosphere of the movie: the final duel between the knight and the “dragon” is pretty anticlimactic if you ask me.

As far as a recommendation goes, there is enough vision here to make the movie a curiosity to watch for film buffs. There isn’t a ton of pure entertainment value to it, however, outside of Harvey Keitel hilariously trying to fight a spaceship with a lance and a mace. That, at the very least, was the saving grace for me.