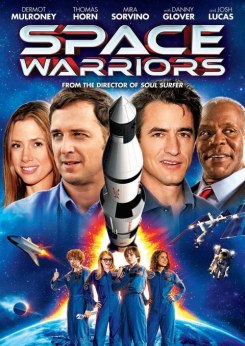 Today’s feature is the pseudo-remake of the 1986 flop, SpaceCamp: 2013’s Space Warriors.

The editor on the film was Jeff Canavan, who has worked on features like Bratz, Save The Last Dance, Lawnmower Man 2, Homeward Bound II, Star Trek: Insurrection, Garfield, and The Shawshank Redemption.

The musical score for Space Warriors was composed by Larry Brown, who provided music for the infamous Joe Don Baker movie Mitchell and the television series The Real Adventures of Johnny Quest. 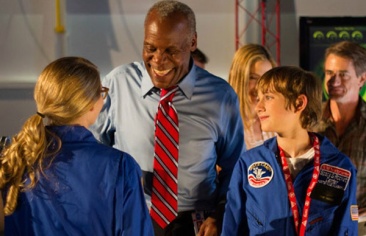 The plot of Space Warriors is summarized on IMDb as follows:

A group of kid space cadets must help in the rescue of three astronauts whose ship got stranded in space.

Space Warriors was filmed at the U.S. Space and Rocket Center in Huntsville, AL, which is home to the original location of Space Camp, and was also the primary filming location for 1986’s SpaceCamp.

Space Warriors currently has a 4.4 user rating on IMDb, along with a 34% audience score on Rotten Tomatoes.

It is impossible not to compare Space Warriors to 1986’s SpaceCamp: though it isn’t technically an official sequel or remake, there are undeniable similarities between the two features. The biggest changes for Space Warriors are all actually pretty sensible: the child actors are all the same age, instead of a mix of teenagers and children, they aren’t shot into space, and the hyper-intelligent robot sidekick plot is totally nixed. Unfortunately, the lack of any of these peculiar elements of the first movie leads to a far less charming end product. The fact of the matter is, real Space Camp isn’t all that flashy or glorious, and that is (at least partially) reflected in this movie.

The other big drawback for Space Warriors is that the primary cast is made up of a lot of children, which is a recipe for disaster. Child actors with any modicum of talent are rare, and the odds of finding multiple ones for the same production are astronomical. Even Joaquin Phoenix, who grew into a fine actor with age, was not particularly good in SpaceCamp. In Space Warriors, the child actors are awful. Just awful. Even worse, all of the action of the movie surrounds them. At least in SpaceCamp, Tom Skerritt and Kate Capshaw offered some slight respite from the childish shenanigans of Max & Jinx. No such luck is to be had in Space Warriors: it is (with little exception) all kids, all the time.

One of my favorite things about Space Warriors is the recruitment montage at the beginning, which features Josh Lucas wandering around the world with an inflatable astronaut companion, hunting down brilliant children to bring them to Space Camp. Honestly, I would watch an entire movie that focuses just on the road trip shenanigans of Josh Lucas and his inflatable astronaut buddy. That would undoubtedly be more interesting than Space Warriors if you ask me. 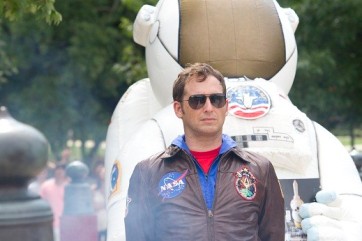 I mentioned in my review of 12 Rounds that the movie comes off like a tourism advertisement for the city of New Orleans. Likewise, Space Warriors is packed with shots of both the U.S. Space and Rocket Center and Huntsville, AL. It might not be excessively noticeable for someone not from the area, but for me, the constant shoehorning feels downright oppressive. Likewise, Space Warriors gives off the slightest whiff of desperation: there was clearly an intention  here to re-inspire a rising generation to care more about exploration and space travel, in an era where the interest seems to be at an all-time low. However, I don’t think Space Warriors is going to ignite any flames of inspiration like The Martian or Interstellar, given it is pretty much a pile of garbage. Then again, I’m not ten years old. Maybe kids love this shit.

Space Warriors isn’t a movie that was aimed for general audiences like SpaceCamp was: it is unapologetically a kids movie. As is the seeming standard for children’s entertainment, the humor is low-brow, the acting is bad, and the whole thing looks and sounds like garbage to anyone who is older than 12. However, I have trouble blaming that entirely on the movie, as much as it is a plague of the genre in general.

I’ve never understood why children’s entertainment isn’t held to a higher standard: it seems like there is essential no quality test for anything in the genre. Children’s movies should be aimed to inspire and educate while also entertaining, like Wishbone. It doesn’t need to be a compilation of loud noises, farts, and pratfalls like The Garbage Pail Kids: that’s actually the worst possible thing that we as a society could be forcing children to consume. That how you wind up with a generation of Adam Sandler fans if you ask me. To Space Warriors‘s credit, its heart is certainly in the right place in this regard, in spite of some lapses here and there. I don’t want to be excessively hard on it, but I’m also certainly not going to recommend it to anyone. Unless you are a big fan of SpaceCamp and are curious about this re-imagining, then skip it.

One thought on “Space Warriors”