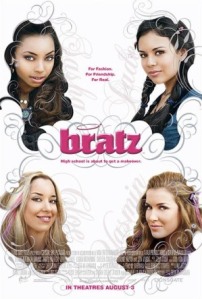 This is not a good movie. I would go so far as to say that “Bratz” is about as detached from reality as any movie I have ever seen. The version of the world portrayed in “Bratz” is almost like a magical realist setting as written by an 11 year old: it is roughly as vapid as it is bizarre and surreal. For a movie written and directed for tweens, somehow it manages to be unintentionally entertaining. 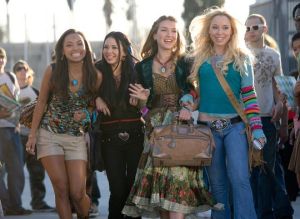 Somewhere between the over-the-top characters and plots, the abysmal writing, and the horrible acting, there is a weird charm buried in the failure of this movie. Director Sean McNamara, who was responsible for “3 Ninjas: High Noon at Mega Mountain”, has managed to fine-tune the art of making shitty children’s movies throughout his career. I have seen a handful of his other features, however, and none of them have the odd, intangible quality of “Bratz”.

One of the few recognizable faces in “Bratz” is Jon Voight, who is certainly capable of saving bad movies with a grand, eccentric performance. However, he gets very little screentime as the principal of the school, and very few lines. I was really hoping for some “Anaconda”-style Voight in this flick, but that regrettably never happened. The rest of the cast is made up of at-best television actors, and unsurprisingly, none of them delivered great performances in this doll-inspired movie. 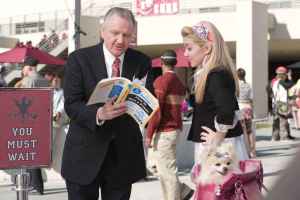 So, if not the acting or directing, what did save this movie? Did it have clever writing? The short answer to that question is ‘no’. The pacing of the story is really bizarre, with a number of what felt like false endings late in the movie. There is also a really strange time skip about 20 minutes in, that moves the story forward 3 years with no clear changes in the characters at all.

However, I don’t think anything measures up to how bad the dialogue and character writing is in this film. During a fight within the central Bratz gang, one of the girl’s accuses another of buying her friends with her dad’s bank account. The retort: “well, you don’t have a dad or a bank account”. If you ask me, that is an excessively cold burn for a kid’s movie, and sloppily delivered to boot. One of the leads attacks another character for having an absentee (dead?) parent, and for being poor.  The whole exchange is brushed off pretty quickly, and the whole gang is together again and as close as ever before too long. That, to me, is beyond unrealistic: you don’t just forget that kind of thing. The characters are without any kind of depth or genuine tension between them, which makes the resolution to the “no dad/no bank account” scene just feel bizarre.

Bad writing, bad acting, and bad directing. Yet, again, I found “Bratz” to be a mildly entertaining bad movie. Honestly, I can’t quite explain why. Somehow, in the mixing together of the independently shitty elements of this movie, a small amount of charm is produced as a byproduct. I do, however, know that I am not alone in this opinion. The good folks at “The Flop House Podcast” unanimously recommended “Bratz”, despite how bad the movie is mechanically. I found that at least mildly reassuring, in the sense that I apparently haven’t totally lost my ability to discern between good and bad movies.