The plot of Critters is summarized on IMDb as follows:

A race of small, furry aliens make lunch out of the locals in a farming town.

Critters was co-written and directed by Stephen Herek, who went on to make The Mighty Ducks, Bill & Ted’s Excellent Adventure, Mr. Holland’s Opus, Holy Man, 101 Dalmatians, and Don’t Tell Mom The Babysitter’s Dead, among others. His co-writer for the movie was Domonic Muir, who also wrote The Gingerdead Man and the first three Evil Bong movies.

Critters was edited by Larry Bock, who also cut movies like Breakin’, Alligator, Joysticks, Final Justice, Bring It On, The Mighty Ducks, Bill & Ted’s Excellent Adventure, and The Santa Clause over his career. 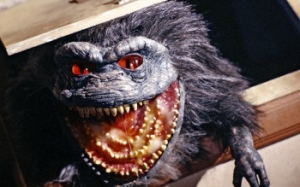 The visual effects work for Critters was done by two outfits: Fantasy II Effects, which has gone on to work on Moonrise Kingdom, Vampire in Brooklyn, Hellboy, The Core, Last Action Hero, Aliens, and Tremors (and more) in the years since, and Quick Silver FX Studio, which also did Eliminators and Invasion Earth: The Aliens Are Here before apparently dropping off the radar.

The music for Critters was composed by David Newman, who went on to score numerous films, like Death To Smoochy, The Brave Little Toaster, Heathers, Bill & Ted’s Excellent Adventure, Hoffa, Jingle All The Way, Galaxy Quest, Throw Momma From The Train, Matilda, The Phantom, Ice Age, and The Spirit, among many, many others.

Financially, Critters made a decent profit, grossing just over $13 million domestically on an estimated $2 million budget.

Critters received a generally negative response from both critics and audiences. Currently, it holds Rotten Tomatoes scores of 57% from critics and 45% audiences, along with an IMDb user rating og 6.0/10.

Interestingly, one of the handful of critics to give Critters a seal of approval was Roger Ebert, who gave the movie 3 stars:

…what’s interesting is the way the movie refuses to be just a thriller…What makes “Critters” more than a ripoff are its humor and its sense of style. This is a movie made by people who must have had fun making it.

Personally, I agree with Ebert on this to a point. The fact that Critters doesn’t play itself as a straight monster movie does set itself out from a lot of other science fiction, but it also feels very Gremlins. The fact that the monsters here aren’t as emotive or intriguing as their higher-budget cousins doesn’t help, either: they are a little too similar, and Critters doesn’t come close to matching the quality of the humor, gore, dread, or nostalgic awe on display in Gremlins.

I think Critters probably plays better today, with a fair amount of distance from its cohort films like Ghoulies and Gremlins, than it did on its initial release. A lot of the aspects that drew unfavorable comparisons back then feel more like homages than ripoffs when you watch it today. That said, no amount of time or distance passed is going to make this movie good. There are definitely some comedic highlights, but the uneven performances and stilted dialogue hinder the movie as a whole. I will say that this makes for a pretty even waypoint between Leprechaun and Gremlins when it comes to the scale of success of horror-comedies, so it could certainly be a lot worse. Also, the eponymous Critters themselves aren’t too shabby: there are some moments of really excellent puppet work.

If you are looking for a little 1980s flashback, this is a decent movie to serve that purpose. It isn’t great, or even terribly memorable, but it is entertaining enough to justify your time.

One thought on “Critters”