The plot of Showdown in Little Tokyo is summarized on Rotten Tomatoes as follows:

Dolph Lundgren stars as police detective Chris Kenner, an American raised in Japan. He is given a new partner, Johnny Murata (Brandon Lee, making his Hollywood debut), a Japanese raised in America. The two are made for each other — Chris doesn’t appreciate American culture, while Johnny doesn’t much like Japanese culture. One thing they both enjoy are the martial arts, of which they are experts. The two are assigned to L.A.’s Little Tokyo, trying to nab the notorious Yoshida (Carey-Hiroyuki Tagawa), a drug manufacturer using a local brewery as his distribution center.

Showdown in Little Tokyo was directed and produced by Mark L. Lester, who was also behind movies such as Class of 1999, Class of 1984, Commando, Roller Boogie, and Firestarter.

The two writers for the film only have a handful of other credits between them, most notably a couple of episodes of Dragnet and a television adaptation of The Watsons Go To Birmingham.

The cinematographer for Showdown In Little Tokyo was Mark Irwin, who shot Scream, Scanners, Videodrome, The Fly, Class of 1999, RoboCop 2, New Nightmare, Kingpin, and Steel, among many, many other well-known features.

The musical score for the movie was provided by David Michael Frank, whose other credits include Poison Ivy, Suburban Commando, Out For Justice, Hard To Kill, and Best of the Best II.

The cast for Showdown In Little Tokyo is primarily made up by Dolph Lundgren (Rocky IV, The Punisher, I Come In Peace, Johnny Mnemonic), the late Brandon Lee (Laser Mission, The Crow), Tia Carrere (Wayne’s World, Kull The Conqueror), and Cary-Hiroyuki Tagawa (Mortal Kombat, Vampires, The Phantom). 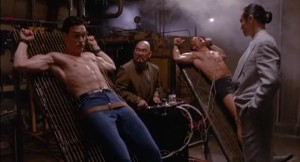 Showdown In Little Tokyo suffered from a significant amount of studio interference, primarily in the form of mandated edits to the final product. Likewise, even before the movie was shot, the screenplay went through a number of different forms. The experience burned director Mark Lester out on working in the studio system, leading him to take on smaller, self-funded projects.

The public reception for Showdown In Little Tokyo was generally negative. It currently holds Rotten Tomatoes ratings of 29% from critics and 51% from audiences, alongside an IMDb user rating of 6.0. Likewise, the movie certainly didn’t set the box office on fire: it brought in well under $3 million in its theatrical release, on a estimated production budget of $8 million.

I was introduced to Showdown in Little Tokyo pretty recently. For whatever reason, it has never been on my b-movie radar, and I have absolutely no idea why. As far as cheap, b-level action movies go, this is about as good as it gets. Not only does this movie showcase a classic buddy-cop formula, but the fights are entertaining, the antagonist is more than sufficiently hammy, and all of the players seem to be having a great time with the material. I’m a huge fan of this particular era of Dolph Lundgren, as he took on some damn entertaining projects, and gave performances that I think easily out-class contemporaries like Stallone or Schwarzenegger, and Showdown is no exception. 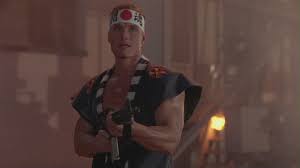 There is one aspect of Showdown In Little Tokyo that definitely makes it stand out from the field of similar action flicks: outside of perhaps Tango & Cash, it is the most homoerotic entry into the buddy cop genre.

Showdown in Little Tokyo doesn’t bill itself as a gay action film. And like most action movies, that doesn’t do much to disarm just how amazingly queer it is. I mean, we’re talking about a movie where a muscular blonde guy spends entire scenes clad in nothing but black leather hot pants and men compliment each other on the exquisiteness of their dicks

That excerpt is no exaggeration, either. In one particularly notable moment in the film, Brandon Lee tells Dolph Lundgren that he has “the biggest dick I’ve ever seen on a man,” and the script and performances are both laden with slightly more subtle references to the two men having a potential attraction.

Much like with Tango & Cash, it isn’t totally clear if this angle was intentional on the part of the writer/director team (though the penis line seems pretty blatant). Regardless, the chemistry of the subtext adds a lot of entertainment value to what is already an amusing, saturated-with-machismo buddy-cop feature.

I can’t recommend Showdown In Little Tokyo highly enough. Not only is the action good, but the performances are memorable, the plot is over-the-top, and even the costuming got a few chuckles out of me. This is the pinnacle of a specific type of b-movie film-making, and it’ll take you on a time-traveling trip to a bygone era. The comedic performance of Brandon Lee brings up a lot of questions of what might have been if the fates had taken another turn, and Lundgren is still in his top form here. The homoerotic angle of the films adds a whole extra layer of entertainment value, whether it is read as intentional and subversive, or just hilariously oblivious on the part of the creative team. Either way, I think it is hard not to find something to enjoy on a re-watch of Showdown in Little Tokyo.

One thought on “Showdown In Little Tokyo”