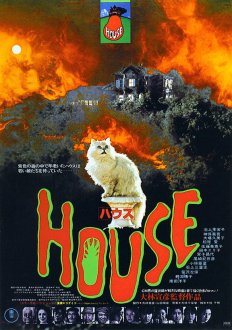 The plot of Hausu is summarized on IMDb as follows:

A schoolgirl and six of her classmates travel to her aunt’s country home, which tries to devour the girls in bizarre ways.

Hausu was directed and produced by Nobuhiko Ôbayashi, who was previously known for doing a fair amount of television, short film, and commercial directing in Japan. Obayashi, or “OB,” also provided the film’s distinct special effects, and was notably the primary advocate for the film during its tumultuous pre-production. While he has continued to make many films over the years, and is considered a celebrity in Japan, Hausu is by far his film with the most international recognition and acclaim.

Serving as the production designer and assistant director for the film was Kazuo Satsuya, who provided design work for two other notable cult movies: Lady Snowblood and Godzilla vs. Mechagodzilla.

One of the producers for Hausu was Tomoyuki Tanaka, a Toho producer who had a hand in the creation of countless Japanese cinema classics, including monster flicks like Godzilla, Rodan, and Mothra, as well as Kurosawa features like Yojimbo, The Bad Sleep Well, Kagemusha, and Sanjuro.

A number of the most distinct elements of the film were based on ideas collected from OB’s young daughter prior to the writing of the screenplay. He has said that he asked his daughter for ideas because “children can come up with things that can’t be explained.” Among the many ideas from his young daughter that made their way into the final film were the hand-eating piano keys, the very concept of a killer house, the watermelon-head being pulled from a well, and the bizarre pillow attack.

Following the project getting a green light from Toho, none of the Toho staff directors wanted to take it on, fearing that the film could easily be a career-ender due to the screenplay’s outlandish concept. After it sat unproduced for 2 years, OB, the film’s primary driving force, was given permission to direct. Toho was initially hesitant to let him take the reigns, specifically because he wasn’t on staff with the company.

Hausu finally got a theatrical release on July 30, 1977 in Japan as part of a double feature. It wound up being a surprise success, as it particularly struck a chord with cinema-going youth. Despite its popularity, the film didn’t make it officially to North American theaters or homes until well into the 2000s.

The Criterion Collection, which is known for distributing influential and well-regarded films on home video, released DVDs and blu-rays of Hausu in October 2010, bringing a new audience to the film. 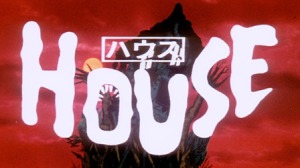 Hausu has had a complicated history with critics: Japanese critics didn’t care for it initially when it was released in theaters, but its long-belated release in North America led to a critical re-evaluation decades later. North American critics have mostly praised it, and time has solidly cemented the movie as a memorable cult classic.

The two most defining elements of Hausu are, without much argument, its bizarre images and odd, often confusing tone. One of the most frequent descriptions I have heard of the movie is that it is like a “fever dream,” and there isn’t really a better way to describe it. There’s a sense of discontinuity between the film’s bleak content, cartoonish color, and whiplashed tone that makes it seem that it could only be the result of madness, and perhaps a wholesale divorce from reality.

One of the most impressive aspects of Hausu is its peculiar production design. The prominent matte painting backdrops and clear set pieces are surreal in how transparently artificial they are. In a sort of rejection of traditional wisdom, the design spits in the face of immersion: there is never a moment where the audience could confuse the events in the film with reality. In that sense, I was reminded a bit of The Cabinet of Dr. Caligari, though with a dramatic injection of frenetic color, gore, and LSD.

One of my initial issues with the movie while I was watching it was that the characters are incredibly thin, and are mostly boiled down to single character traits. On top of that, the lack of characterization and time on screen for the individual girls makes most of them hard to distinguish from each other. However, as the movie went on, this is an element that started to interest me. Each of the girls have names that are related to their assigned traits, and occasionally to their deaths. It might be fair to write this off as shallow writing, but at the same time, there is also a debatable element of genre-awareness present as well. Given how transparently artificial the movie’s design is, why wouldn’t the characters follow suit? Whether this screenplay is an example of trope-awareness and genre-deconstruction is something that is probably worth discussing, whether it was intended or not by the writer.

Any of these elements I have mentioned so far could potentially be argued as positives or negatives, depending on who you asked about them. I think this is something that makes Hausu a uniquely interesting movie to discuss, and is one of the top reasons that I would recommend just about anyone give this movie a shot. For cult movie fans, it is absolutely essential. But, for everyone else, I think this is still worth watching. I would recommend going into the movie with as little information as possible, however. There are definitely enough highlights to entertain most audience members, though the movie does take a little time to get going, and the slapstick elements are likely to fall flat with many.