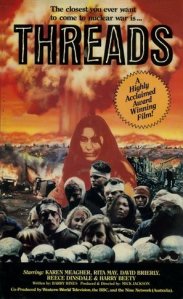 If you haven’t heard of the 1984 film Threads, you are certainly not alone. There aren’t many BBC made-for-television movies that are talked about at all 35 years after their airing, let alone have wide name recognition after all of that time. I wasn’t made aware of this movie until I was in college, and it was part of a class I took on The Cold War. I remember it being covered along with The Day After, as examples of Cold War nuclear fears manifested on film. As you can imagine, it is a pretty bleak affair, as summed up in its IMDb synopsis:

The effects of a nuclear holocaust on the working class city of Sheffield, England and the eventual long-term effects of nuclear war on civilization.

Recently, Nashville’s Belcourt Theatre held a one-night theatrical screening of this nightmarish speculative vision of the aftermath and carnage of nuclear war – something that is a rarity for television movies. This is was my first time watching the film in its entirety – my class only included clips as I recall.

To begin with, this is an emotionally potent piece, even today – I can only imagine what it was like to watch contemporaneously. Screenwriter Barry Hines put some real effort into creating a wide cast of tangible and grounded characters – some likable, some not – before literally obliterating them in fire, ash, and languishing torment. While the early segments felt unnecessarily lengthy and banal when I was watching them, I didn’t realize how much I was connecting with the dull and realistic humanity of the characters until they began vaporizing.

The film’s director, Mick Jackson, did a handful of theatrical movies following Threads, including Volcano and The Bodyguard, but this is almost certainly his most lasting work. While it isn’t necessarily remarkably shot or edited, it is immensely affecting as a complete package. The combination of Hines’s writing, shocking makeup effects work, and a handful of key performances is a gut-punch of a cautionary tale.

That said, I’m not sure if I can recommend it. It has some pretty serious pacing issues due to its unconventional structure, inconsistent and often unnecessary narration, and is nowhere near the realm of entertainment. For people interested in Cold War history, I think it is a great watch, and it can be a great call to action towards denuclearization, but it is also definitely a product of its era. This isn’t going to have the impact on someone today as it had in 1984 – there’s too much distance between the viewer and the threat now. This was designed very particularly for a contemporaneous audience, and I think that is something that definitely comes through today.  Personally, I am glad I watched Threads, despite its flaws. However, I don’t think I’ll ever watch it again, either.