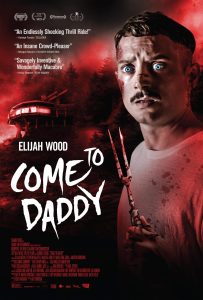 Yesterday, I had the chance to catch Come To Daddy, the feature directorial  debut of Ant Timpson, who is best known for producing modern cult favorites like Turbo Kid, Deathgasm, The Greasy Strangler, and The ABCs of Death. With a screenplay by The Greasy Strangler co-writer Toby Harvard, it is a fascinatingly tense and gore-laden affair.

The film opens with Elijah Wood’s meek character, Norval, arriving at a secluded beach house that he describes as “like a UFO from the 1950s,” which is the home of his estranged and enigmatic father. From the moment he arrives, he has a series of baffling, tense, and inexplicably combative conversations (and non-verbal interactions) with his host – an intermittently aggressive and eccentric drunkard played enthrallingly by Stephen McHattie.

These early scenes between McHattie and Wood reminded me of a notable early sequence in Kevin Smith’s 2014 body-horror film Tusk, which featured the late Michael Parks and Justin Long in a peculiar verbal sparring match juxtaposed with the warm surroundings of a cozy, fire-lit living room.  Instead of having the dancing shadows of a fire-lit room surround them, McHattie and Wood have their verbal duels with a scenic coastal vista in ever-present view from their modern, saucer-like abode. For fans of cerebral indie-horror, the first half of Come to Daddy is likely to please – there is palpable drama, a deep sense of unease, and some salient themes of family, mental illness, and alcoholism underscoring their interactions. However, viewers are assured that “you have no fucking idea what is happening here” – twists and turns are abound, paving the way for a stylistic and tonal shift into a violent, shocking, and depraved realm.

Unlike Tusk, which is burdened by both pacing and performance issues, both the screenplay and the acting performances in Come to Daddy are impeccable. Beyond Wood and McHattie, who are both fantastic, all of accessory cast members feel tangible and real – there is a conveyed sense that they all have entire lives and stories of their own off-screen. Even a character with a single, brief scene is unforgettable for his ruminating on the sinister nature of “raisin eyes.” When performances and the screenplay click together in just the right way, this is the result.

While I understand folks who feel much more affection for the first half of Come To Daddy, I still thoroughly enjoyed its abrupt yet fluid shift into a higher gear. The tension that was built in the first half never dissipates, but adapts to the more violent, faster pace of the developing action.

On the whole, I found this to be enjoyable horror/thriller flick with some expertly tense sequences. While I don’t think of it as among the highest tier of contemporary horror with the likes of features from Jordan Peele, Ari Aster, or Robert Eggers, I think it fits into a nice niche as an oddball movie with wry humor and tense dialogue.  While this isn’t a movie that is going to light up an awards show, it is going to scratch a unique itch for a lot of horror film aficionados who appreciate a different, artistic twist on their gore-fest without losing the charming ethos of a b-movie.