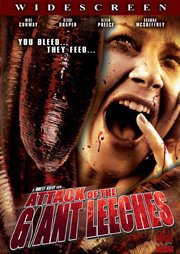 Today’s flick is a modern remake of a classic Roger Corman creature feature: Attack of the Giant Leeches, from 2008.

The visual effects for Attack of the Giant Leeches were provided by Tony Masiello, who has worked on movies like Shrek 2, The Smurfs, Man of Steel, The Amazing Spider-Man, and Ghost Rider: Spirit of Vengeance.

The music for the film was provided by Kevin MacLeod, who somehow has nearly 2000 composition credits over his career according to IMDb, primarily on short films and documentary features.

Attack of the Giant Leeches unsurprisingly carries over the same basic plot from the original movie: two giant leeches are living in a swamp, and kidnapping locals to feed off of. The disappearances spike curiosity, and the leeches are inevitably discovered.

This remake was neither widely distributed nor well-received: it currently holds a 3.0 rating on IMDb from less than 100 voters, and a 43% audience score on Rotten Tomatoes from 52 users. 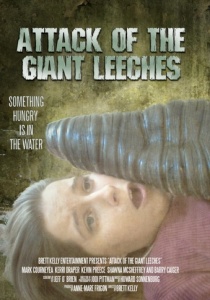 This movie is basically just total garbage. It looks and sounds like Ben and Arthur mixed with an Ulli Lommel movie (Zombie Nation or Daniel Der Zauberer, take your pick), and the acting is all on par with those movies as well. However, it was clearly made with admiration for the source material, and it perhaps stays a little too loyal to a movie that is by no means a masterpiece to begin with.

I will say that this movie got a genuine laugh from me when the leeches first showed up. Instead of having people in full leech costumes like the original movie, this flick uses obviously rubber leech appendages, which come from off screen to wiggle around and gently rub at the actors. Whenever a movie uses that kind of monster, I can’t help but picture the production assistant that had to wear the monster arm, standing just off screen trying not to giggle at how ridiculous the effect looks. However, to the movie’s credit, these monsters look far more like giant leeches than the squid-like creatures in the original movie.

Attack of the Giant Leeches also features some of the worst day-for-night shooting I have ever seen in a movie, in which there is a light blue filter placed over a scene that is obviously being shot during the day. You can get away with that sometimes if it is done well, but this is one of the laziest implementations of it I have ever seen. Characters are wearing baseball caps that are obviously casting shadows from high sunlight, sun reflections are coming off the water, and the cloud cover makes it obvious that this wasn’t just filmed during the say, but on a pretty bright day.

As far as positive things to say, this remake did put some effort into making the ending more interesting. Instead of just dynamite fishing to kill the leeches, there is a more tense showdown that involves bait and self-sacrifice. Even though the explosion effects look terrible, it is still a noted improvement on the conclusion of the original movie. They also put in an honest effort to update the underlying fears that motivate the storyline. In the original, the creatures were the result of atomic shenanigans from Cape Canaveral. In this remake, however, the movie takes a Birdemic approach to the villains, attributing their existence to pollution of their ecosystem.

Overall, this movie is amateurish and trashy, and hardly worth spending any time on. That said, this was clearly a fan creation born of affection for the source material, and it does manage to improve on it in some key ways. Regardless, unless you really liked the original movie or have an affinity for this sort of low budget horror, this would be best to avoid.