Today’s flick is a little-known 1999 feature from the infamous library of Full Moon Entertainment: the amazingly-titled Murdercycle.

Murdercycle was distributed by Full Moon Entertainment, an outfit run by Charles Band that is infamous for b-level horror movies like Castle Freak, Demonic Toys, and Dollman, and notoriously terrible franchises like Puppet Master, The Evil Bong, and The Gingerdead Man.

Apparently, Murdercycle was created from the remnants of an unrealized Charles Band project from back in the days of Empire Pictures, which would have involved motorcycles battling each other in something called Battle Bikes. However, it didn’t get made before Empire folded, and Band went back to the drawing board years later under his new Full Moon label.

Between the director and two credited screenwriters for the movie, only one of them has any other credits to his name: writer Neal Marshall Stevens, who used his frequent pseudonym “Benjamin Carr” for the project. His other credits include Retro Puppet Master, Hellraiser: Deader, and Thir13en Ghosts, along with a handful of other low budget horror films.

The plot of Murdercycle is summarized on IMDb as follows:

A meteor falls to earth near a secret CIA military hideout and merges with a motorcycle and it’s rider to create an alien soldier bent on recovering an alien artifact. Military soldiers with the help of a female doctor that can read minds try to figure out what is going on and how to stop it before it kills them. They are also hindered by the CIA agent in charge of the base who refuses to divulge the hideouts’ secrets which could help them.

At first glance, Murdercycle seems to have all of the required elements for a fun b-movie. Honestly, I was sold on the title alone. A killer motorcycle? How could that be boring?

I went into Murdercycle without any other background than that. Based on the title, I thought of a few directions the movie might go. It could be a story like Death Proof or The Hitcher, about an unhinged biker who builds a rig equipped with blades, explosives, and gadgets for terrorizing people on the road. Or, maybe the motorcycle is just operating itself for purposes of mischief and murder, like a Maximum Overdrive or Killdozer situation. Either way, I would have been more than content.

Instead, Murdercycle has very little to do with the titular vehicular manslaughterist (which, as it turns out, is an alien that absorbs technology). The movie is, weirdly enough, a bit of a character drama, and spends a lot of time focusing on betrayals, interpersonal tensions, and widespread deception. The murderous wheeler is an occasional interjection of lackluster pyrotechnics into what is otherwise a military drama. While that might sound kind of intriguing to some, the characters and dialogue are pretty severely lacking, and the acting ranges from “soap opera adequate” to “community theater unqualified.”

The motorcycle itself is disappointing as well. It isn’t even a motorcycle as much as it is a dirt bike with a bunch of vaguely menacing accoutrements glued onto it. To say the least, it didn’t match the image of a bladed, chrome, roaring Harley Davidson beast with a taste for blood that was initially conjured in my head from the title.

An unexpected amount of time in the move is dedicated to vaguely interesting philosophical issues, like the ethics of Artificial Intelligence and the potential boundary-violating practice of mind reading. Weirdly, though, the ability to read people’s thoughts is taken as a given,and is apparently public knowledge in the world of the movie: one of the central characters is a psychic, and no one is terribly surprised, alarmed, or even incredulous about that claim.

The real problem with the injecting of these philosophical ideas into the story isn’t that they are there (science fiction really should intersect with philosophy), but how they are written in. Every time one of these thought-provoking issues comes up, the movie grinds to a complete halt, and they are addressed with the subtlety of a hammer on a gong. Even worse, they are addressed really poorly, like you are sitting in on the first session of a Philosophy 101 course.

Likewise, the writers clearly wanted to slip in references to comic books in the screenplay, which is something that can be done well and effectively without distracting the audience. However, instead of making the references organic and natural, the characters are written to go out of their way to mention specifics about the Fantastic Four over and over again, beyond the point of saturation.

Honestly, this is one of the most disappointing movies I have seen in a long time. Not only is the title golden, but there were plenty of ways to make the movie better, even with the existing plot. I actually appreciate some of the ideas presented here, which indicate some ambition in the writing, but the execution was disappointingly sloppy. The end result of it all is a movie that is basically Predator, but with freshman philosophy discussions instead of over-the-top machismo, and an amateurishly-decorated dirtbike instead of a terrifying alien.

Today’s b-movie feature is “Dollman,” the story of a stranded renegade cop from space who barely measures a foot tall on Earth.

“Dollman” was directed by b-movie legend Albert Pyun, who has been behind films like “Cyborg,” “Captain America,” “Alien From L.A.,” and “The Sword and The Sorcerer” over his 30+ year directing career.

The screenplay for “Dollman” is credited to Chris Roghair, who has no other acknowledged writing credits. The story is credited to Charles Band himself, who ran Full Moon Pictures, the outfit which produced the film. There were a couple of other hands involved in the writing that didn’t received formal credit on the film, namely David Padian (“Puppet Master II”) and Ed Naha (“Dolls,” “Troll,” “C.H.U.D. II”).

The cinematography for “Dollman” was provided by George Mooradian, who also worked on features such as “Bats,” “Omega Doom,” and “The Hitcher II.”

The music for “Dollman” was provided by Anthony Riparetti, who has contributed scores for other Albert Pyun movies such as “Alien From L.A.” and “Knights.” 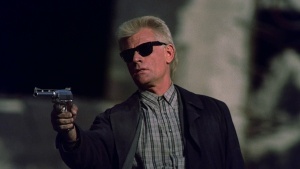 The cast of “Dollman” is headlined by Tim Thomerson (“Trancers,” “Fade to Black”) and Jackie Earl Haley (“Watchmen”), with the supporting cast being rounded out by Kamala Lopez (“I Heart Huckabees”), Frank Collison (“O Brother, Where Art Thou?”, “The Village”) and Nicholas Guest (“Trading Places”).

The story of “Dollman” follows a renegade space policeman as he pursues an alien criminal to Earth, where the two of them only measure a foot tall. They are then forced to find a way off of the planet while surviving life in the gang-dominated Bronx and battling each other.

“Dollman” received a sequel via a crossover with another Full Moon Features franchise, “Demonic Toys.” “Dollman vs The Demonic Toys,” as it was creatively titled, was directed by Charles Band and is widely disliked even by fans of his work.

Interestingly, “Doll Man” is an actual super hero who currently exists within the D.C. canon, though he is best known for in his golden age form published by Quality Comics. He was interestingly the first shrinking comic book hero, predating more well known characters like “Ant Man.” Full Moon’s “Dollman” also had its own limited run in comics published by Eternity, which produced series based on a number of the production’s features.

I wasn’t able to find any information about the budget or financial gains of the film, but I assume that the budget was significantly low given the production company. I would be shocked if it didn’t ultimately turn a profit of some kind. The movie has a bit of a cult following, but isn’t widely beloved: it currently has an IMDb rating of 5.8, and a Rotten Tomatoes audience score of 37%.

Most reviews I have seen of “Dollman” admit that, despite its cheesiness, it certainly has some entertainment value to it for fans of b-movies. I can’t help but agree: it isn’t fantastic by any means, but there are plenty of things to enjoy in “Dollman” if you can accept it for the minimal (ha) production that it is.

The special effects throughout “Dollman” are really a mixed bag. I loved the work that was done to the environments to make characters appear small, and the over-the-top squibs kind of work, but the rest of the effects just don’t cut it. That said, the squibs are more than enough to enjoy for bad movie fans.

I will say that the sets and production design in “Dollman” are ok, and definitely distinguish Earth and the alien world. However, the lighting and shots make things very difficult to see, particularly in the early segments on the alien planet. It pretty much offsets the creative details of the world when you can’t see them on screen.

One of the key draws of “Dollman” is definitely the super gun, which essentially makes up for the character’s small size. The effects of it are absolutely ridiculous and it is beyond overpowered, but it certainly is fun to watch. I will note that the guns design and Dollman’s personality make it pretty transparent that his character is basically Dirty Harry in a sci-fi setting, but that is hardly something to complain about.

The writing and acting throughout the movie is pretty awful, but Tim Thomerson definitely stands out as a highlight. He manages to make some otherwise cringe-worthy one-liners and puns work for his bad-ass character, which is no small feat.

Overall, “Dollman” isn’t a great movie, and doesn’t quite deserve classification among the elite “good-bad” features out there either. It certainly has entertaining moments that give it value, but it isn’t an essential watch if you ask me. If you are a fan of Full Moon or Albert Pyun, you will probably enjoy it, but average audiences might not be as enthusiastic about the feature.