The Adventures of Hercules II 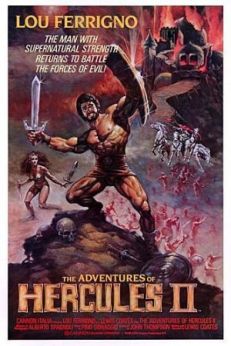 Hercules II was once again written and directed by noted Italian b-movie director Luigi Cozzi, under the anglicized pseudonym of Lewis Coates. His other films include the infamous Star Wars knockoff Starcrash, 1983’s Hercules, and a bizarre recut and colorization of the original Godzilla.

The cinematographer for the film was Alberto Spagnoli, who also shot movies like The Last Shark, Daisy Miller, and 1983’s Hercules.

The editor for The Adventures of Hercules II was Sergio Montanari, who also cut such films as Django, Starcrash, and the previous Hercules movie from 1983.

The Adventures of Hercules II was once again produced by the infamous Israeli duo of Yoram Globus and Menahem Golan, who built a legendary reputation for churning out b-movies during their run leading The Cannon Group, such as Enter The Ninja, Over The Top, Masters of the Universe, Ninja III: The Domination, and 1983’s Hercules. However, with The Adventures of Hercules II, neither men had their names directly attached to the movie. Once again, the executive producer for the film was John Thompson, who has since produced action movies like The Legend of Hercules, The Expendables, Mansquito, and Olympus Has Fallen.

The musical score for The Adventures of Hercules II was composed by Pino Donaggio, whose film credits include Carrie, Piranha, Dressed To Kill, Body Double, and Raising Cain, as well as the previous Hercules movie.

The effects work for the movie was provided by a team that included Giovanni Corridori (Cliffhanger, The Italian Job, The Pit and The Pendulum, Leviathan), Alvaro Rossi (Popeye), Lamberto Marini (Sacco & Vanzetti, The Gospel According To St. Matthew), Alain Costa (Space Jam), Giancarlo Ferrando (Troll 2), and Marco Ticozzelli (Alien vs. Predator).

The plot of The Adventures of Hercules II is summarized on IMDb as follows:

Hercules searches for the Seven Thunderbolts of Zeus, which have been stolen by renegade gods.

The Adventures of Hercules II currently holds a 3.9 user rating on IMDb, which is interestingly a tiny bit higher than its predecessor. However, it also didn’t receive nearly as much attention as its predecessor, and has less than one third of the total votes recorded for the original on IMDb.

Hercules II does a decent job of holding on to the bizarre, cosmic aesthetic that made the first movie so visually distinctive. However, it fails to build on a lot of the memorably outlandish moments from the previous film, with nothing even coming close to the glory of cosmic bear tossing. There are still plenty of cheesy effects and moments of bad acting, and it holds up pretty well as an enjoyable bad movie in its own right, but it doesn’t compare to the 1983’s Hercules by a long shot.

As you might expect of any low-budget sequel, Hercules II opens with about 8 minutes of recycled footage from 1983’s Hercules, and plays like a highlight reel before the credits. I was a little surprised that there weren’t more moments of reused footage throughout the film to be honest, as many of these cheap sequels try to milk as much as they can out of their predecessors (like Silent Night Deadly Night Part 2, for instance).

Hercules II certainly has a looser plot than the original (which is saying a lot), which is essentially just an excuse to have Hercules fight a series of monsters in order to retrieve magic thunderbolts from within them. Unfortunately, the monsters were clearly designed to be as cheap as possible, so there aren’t nearly as many elaborate stop motion devices, and most of the monster are standard humanoids. That said, some of the key highlights of the film include a Sasquatch-like monster that is obviously just a guy in a ghillie suit, a quickly decapitated cheap clay-mation Medusa, a white knight with a laser trident (and a forest filled with soul puppets), psychic mermaids, a proper dinosaur laser fight finale, and a fire monster antagonist that looks like the electric gremlin from Gremlins 2.

The silly effects and bad acting combine with the retained bizarre aesthetic from the first movie to make a thoroughly enjoyable bad movie. Even though it isn’t as entertaining as its predecessor, and is rightfully in its shadow, there is plenty in this movie to enjoy. If you happen to be a fan of the first film, I definitely recommend giving this a shot. However, I do think the first movie needs to be seen before this one to provide a bit of a primer for the ridiculousness of it all. 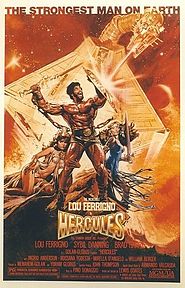 Hercules was written and directed by noted Italian b-movie director Luigi Cozzi, under the anglicized pseudonym of Lewis Coates. His other films include the infamous Star Wars knockoff Starcrash, The Adventures of Hercules II, and a bizarre recut and colorization of the original Godzilla.

The cinematographer for the film was Alberto Spagnoli, who also shot movies like The Last Shark, Daisy Miller, and The Adventures of Hercules II.

Hercules had two credited editors: Sergio Montanari (Django, Starcrash, The Adventures of Hercules II) and James Beshears, who has worked on sound editing for movies like Fortress, Tango & Cash, and The Fugitive.

Hercules was produced in part by the infamous Israeli duo of Yoram Globus and Menahem Golan, who built a legendary reputation for churning out b-movies during their run leading The Cannon Group, such as Enter The Ninja, Over The Top, Masters of the Universe, and Ninja III: The Domination. The executive producer for the film was John Thompson, who has since produced action movies like The Legend of Hercules, The Expendables, Mansquito, and Olympus Has Fallen.

The musical score for Hercules was composed by Pino Donaggio, whose film credits include Carrie, Piranha, Dressed To Kill, Body Double, and Raising Cain.

The special effects work for Hercules was done in part by Germano Natali, who also worked on such movies as The Gaul, King Solomon’s Mines, Devil Fish, Starcrash, and Suspiria. 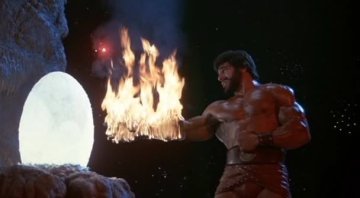 The plot of Hercules, according to Wikipedia, is as follows:

The film is a retelling of the story of Hercules (Lou Ferrigno) battling the wizard Minos (William Berger), who uses “science” in an attempt to take over the world. Hercules must stop him and rescue his princess love in the process.

Hercules was nominated for five Golden Raspberry awards, which are given out annually to the worst films and performances of the year. Ultimately, it wound up ‘winning’ two of the infamous awards: Worst Supporting Actress for Sybil Danning, and Worst New Star for Lou Ferrigno.

Hercules was filmed back to back with the film The Seven Magnificent Gladiators, which features much of the same cast. However, it was directed and written by two even more infamous b-movie creators than Lugi Cozzi: Claudio Fragasso (Troll 2, Women’s Prison Massacre) and Bruno Mattei (Hell of the Living Dead, Rats: Night of Terror).

Apparently, there were significant disagreements among the cast and crew regarding the sort of direction and content the screenplay should take: Ferrigno reportedly adamantly demanded a family-friendly film, while Menahem Golan was in favor of the original vision, which included far more violence and sexual content. Ultimately, Ferrigno won out, and the screenplay was significantly altered.

Hercules currently holds a 3.7 rating on IMDb, along with a 14% critics’ aggregate score on Rotten Tomatoes. However, it proved profitable for the company, and has become a bit of a cult classic over the years: it even received a sequel two years later, which is confusingly known by the names Hercules II, The Adventures of Hercules, and The Adventures of Hercules II.

There is a lot to say about the bizarre epic that is 1983’s Hercules. This is the perfect example of a movie with a truly grand vision without even the slightest capacity to fulfill it. On paper, for example, a cosmic adaptation of the Greek gods living among the stars is pretty interesting, but the cheesiness of the execution that appears in this movie is nothing less than ridiculous. Likewise, wrestling a bear is a pretty impressive feat, but without a budget, it winds up just being stock footage and a guy flailing around in a bear suit. Honestly, I’m not sure how anyone expected throwing a bear into space would look decent, though.

Personally, I think there is a lot to enjoy about this movie. As cheesy as the visuals are, they are also pretty compelling and vibrant, and certainly not your typical sword and sandal fare. There is something to be said for this movie having a unique and peculiar vision to it that provides a certain charm. Likewise, Lou Ferrigno absolutely looks the part of the most famous demigod of lore. If it weren’t for the ridiculous acting, writing, and effects, this might have been a legitimately enjoyable low budget feature. As it stands, though, it is a hilariously entertaining b-movie with some of the most ludicrously memorable sequences I’ve seen in a long time.

Bad movie fans absolutely need to check out this adaptation of Hercules. It has just about everything you could want from a b-movie: bad acting, over-the-top costuming, bizarre writing, cheap effects (including lots of memorable stop motion), silly action, and some behind the scenes intrigue. It isn’t quite Plan 9, Troll 2, or The Room, but it is definitely something special that needs to be experienced.