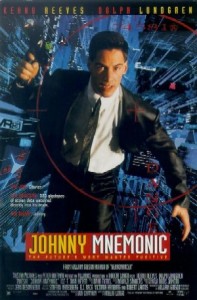 The plot of Johnny Mnemonic is summarized on IMDb as follows:

A data courier, literally carrying a data package inside his head, must deliver it before he dies from the burden or is killed by the Yakuza.

Johnny Mnemonic is based on a 1981 short story of the same name by influential science fiction writer William Gibson, who is regarded as the father of cyberpunk. Gibson also penned the screenplay for this loose screen adaptation of the work, and it remains his only screenplay credit to date. However, he now disowns the film, and claims what made it to the screen wasn’t his work.

Johnny Mnemonic was directed by Robert Longo, who is best known as an acclaimed painter and sculptor. However, he directed a handful of music videos throughout the 1980s, including R.E.M.’s “The One I Love” and New Order’s “Bizarre Love Triangle,” as well as an episode of Tales From The Crypt. On the experience of directing the film, he has stated that “it was f—ing horrible. Johnny Mnemonic is about 65 percent of what I hoped it would be.” 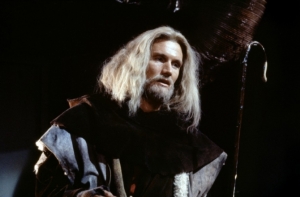 The cinematographer for the film was Francois Protat, whose other credits include the virtual reality horror flick Brainscan and the infamous death-centric comedy Weekend at Bernie’s.

Johnny Mnemonic‘s editor was Ronald Sanders, who also cut the films A History of Violence, Eastern Promises, The Fly, Coraline, Firestarter, The Dead Zone, Scanners, and Videodrome, among others.

The musical score for the film was composed by Brad Fiedel, whose other credits include True Lies, True Believer, Terminator 2: Judgement Day, Fright Night, The Terminator, The Serpent and The Rainbow, and Fright Night Part 2.

Due to a miscue on set, Dolph Lundgren at one point actually punched co-star Henry Rollins in the face during a take. Rollins has since described the experience:

[He hit] like a UPS delivery truck. My DNA uncoiled. I found a new religion. He hit me so hard and it just stopped. My head took the entirety of the weight. I was like, ‘Wow, my thinking is 20 percent slower. I’m running for office!”

Dolph Lundgren’s casting in the film was allegedly in opposition to director Robert Longo’s wishes, and was an order from the producers to try to sell the movie to more demographics and markets. Longo has since claimed that he would like to cut a “45-minute version of [Johnny Mnemonic] without Dolph.”

Keanu Reeves wound up nominated for a Golden Raspberry Award for Worst Actor for his lead performance in Johnny Mnemonic, though he didn’t wind up winning it.

Both William Gibson and Robert Longo initially wanted to make a low-budget independent movie out of the story of Johnny Mnemonic, but were ultimately only able to garner interest in a wide release, high-budget potential blockbuster. Ultimately, both men were unhappy with the result that hit theaters.

As a tie-in to the movie, a Johnny Mnemonic full motion video game was produced and released for DOS, Mac, and Windows 3.x. The era of FMV games is now looked back on with widespread scorn, and Johnny Mnemonic is regarded as one of the most prominently terrible games of the lot.

Johnny Mnemonic is partially remembered today because of its distinct, bright orange VHS tape, which made it visibly stand out from the typical black tapes. 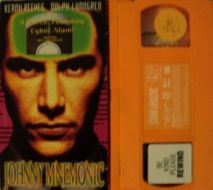 Johnny Mnemonic was made on a production budget of $26 million, on which it brought in a lifetime domestic gross of just over $19 million. International reports have it grossing as much as $50 million, but I couldn’t find a consistent source to verify the foreign market numbers.

Critically, the film did not fare well: it currently holds a 5.6/10 user rating on IMDb, along with Rotten Tomatoes scores of 13% from critics and 31% from audiences.

First off, it has to be said that if Johnny Mnemonic is anything, it is imaginative. The concept behind the film is punctuated with some interesting technological futurism, though a lot of it is undercut with some less than ideal effects. Also, as with most attempts in fiction to envision the future, going back years later makes the film look a bit goofy, and it is impossible not to compare the technological predictions with our actual progresses.

All of that said, the biggest issues with Johnny Mnemonic go far beyond the goofy-looking technologies: if anything, the cyborg dolphins and immersive VR internet helmets are the entertainment high water mark of the flick.

The first and biggest issue with Johnny Mnemonic is its abysmally slow pacing, which is nothing short of agonizing. However, I think there are some interesting reasons for why the film’s plot moves as slow as it does. First off, the production was dealing with both a first-time screenwriter and a first-time director, which can make for a bad recipe out of the gate. On top of that, it is worth noting that the initial vision for Johnny Mnemonic was to make an independent short film. I assume that the screenplay wasn’t totally re-written to make it longer once that plan changed, but that more content was plugged in wherever it could fit. This, as you can imagine, can lead to a slower, more bloated pacing once put to film.  Beyond even that, it sounds like the studio and producers implemented additional pressure at the last minute to add even more into the movie, like the prominent role for Dolph Lundgren. Frankly, it would be impressive if the movie didn’t feel sluggish and overstuffed at that point.

However, surprisingly, that last-minute addition of Dolph Lundgren is almost a savior for the entire film: he brings energy to the screen whenever he shows up, and got me (at least somewhat) re-invested in the story. His performance primarily exists to let him chew scenery and spit one-liners, which is exactly what you would want from a zany villain character. It is also worth mentioning that Ice-T is his usual self here, which is a breath of fresh air for such an un-charismatic movie. Unfortunately, neither Ice-T or Dolph get any significant screen time, which is a huge shortcoming for the flick.

Johnny Mnemonic contains some cool futuristic ideas, has a pretty sleek, grounded science-fiction design, and boasts an amazingly cheesy performance from Dolph Lundgren, but the pacing is so brutally slow that any positive qualities of the flick are thoroughly blotted out. I can recommend looking up some clips of the movie, or maybe an abridged supercut summary, but sitting through the entire run-time is pretty damn brutal. Unless you are a die-hard fan of William Gibson, Keanu Reeves, or one of the other players involved, this is a pretty skippable feature.