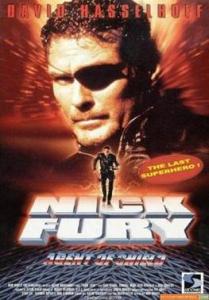 Today, I’m going to look at one of the most notorious pre-MCU Marvel comics adaptations: Nick Fury: Agent of SHIELD, starring David Hasselhoff.

The plot of Nick Fury is summarized on IMDb as follows:

Marvel’s hard-boiled hero is brought to TV. He is brought back to fight the menace of Hydra after exiling himself in the Yukon since the end of the Cold War. The children of the former Hydra head, Baron Von Stucker, have taken charge of the terrorist organization. Under the lead of his vicious daughter, Viper, Hydra has seized a deadly virus and threatens the destruction of America. The covert agency SHIELD brings Fury out of retirement to fight the terrorists.

The character of Nick Fury was created by the legendary Marvel comics duo of Stan Lee and Jack Kirby. He first appeared in May 1963’s Sgt. Fury and his Howling Commandos #1, a World War II war series. However, his modern incarnation as a SHIELD secret agent and spy began with Fantastic Four #21 in December of 1963.

Nick Fury: Agent of SHIELD was written by David S. Goyer, who is now a proven blockbuster screenwriter with credits like Man of Steel, Batman Begins, The Dark Knight, Ghost Rider: Spirit of Vengeance, Batman V Superman: Dawn of Justice, Dark City, and the Blade trilogy. Earlier in his career, however, he penned low budget flicks like The Substitute, Demonic Toys, Kickboxer 2, and The Puppet Masters.

Nick Fury was directed by Rod Hardy, who did a lot of television work over his career, including stints on The X-Files, JAG, Burn Notice, Supernatural, The Mentalist, and Leverage. 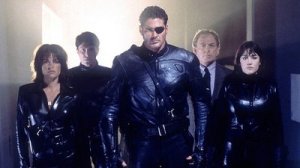 The editor for Nick Fury was Drake Silliman, who also cut Tremors 3, The Christmas Shoes, The Sisters, and did extensive editing work on television shows like Law & Order and Beauty & The Beast.

The musical score for the film was provided by Gary Lionelli (OJ: Made In America, Luck, Dexter’s Laboratory, The Real Adventures of Johnny Quest) and Kevin Kiner (Star Wars: Rebels, Hell On Wheels, Jane The Virgin, Making A Murderer, Leprechaun, Carnosaur 3, Tremors 3). However, Lionelli’s work is interestingly not credited.

Nick Fury currently holds an unenviable IMDb user rating of 3.7/10, along with a 16% audience score on Rotten Tomatoes, and stands as one of the least-seen and most-reviled Marvel comics adaptations.

To be perfectly honest, I’m not sure why Nick Fury is so reviled. Particularly thanks to David Hasselhoff and Sandra Hess, who are having an absolute blast hamming up their respective roles, I found this film to be a cheesy but entertaining throwback to classic spy-centric action movies, kind of like Escape From New York and the Roger Moore James Bond years in a blender. The low budget might not have done it any favors, but the action is still palatable, if a bit hokey in its execution.

One of the odd strengths of Nick Fury is the consistently silly dialogue, which I think transcends the border into effective self-parody. I thought that this was a screenplay that was written with an awareness of its dated material, and used it to its advantage. Hess’s accented one-liners and Hasselhoff’s excessive “tough-guy” showboating all make a lot more sense if you look at the film through the lens of light parody and pastiche, rather than as an earnestly-constructed action flick. Likewise, the overly sentimental and unnecessary romantic subplot (acted out by a soap opera alum, no less) is hard to take seriously, specifically because it isn’t supposed to be.

Nick Fury is without a doubt cheesy and cheap, but I also think that it is exactly what it should have been: a story aware of how misplaced in time it is, that revels in its genre cliches. From what I can tell, a whole lot more people dislike this movie than have actually seen it, which is a damn shame. It isn’t a masterpiece by any means, but it is a fun send up of the sillier Cold War era spy thrillers. By today’s Marvel standards, it would be a massive disappointment, but at the time, this was probably one of their better outings (next to 1989’s The Punisher, of course, which is magnificent).

If you can get into a cheesy action flick, I think there is something to enjoy with Nick Fury (provided you take it all with a grain or two of salt). For bad movie aficionados, this is one that is worth digging up in my opinion, and is in dire need of popular re-appraisal.