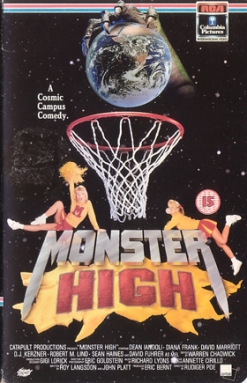 Monster High has two credited writers: John Platt and Roy Langsdon. The two also wrote the screenplays for 1990’s The Forbidden Dance and Out of Sight, Out of Mind. They  later became producers on a variety of reality television shows, including Big Brother, Brat Camp, The Surreal Life, Kid Nation, and Flipping Vegas.

Monster High was directed by Rudy Poe, whose only other directorial works have been a couple of documentaries. However, he did produce a number of Playboy videos in the late 1990s and early 2000s.

The cinematographer for the movie was Eric Goldstein, who was a camera operator on such movies as The Island of Doctor Moreau, New Nightmare, Hard Ticket To Hawaii, Kingpin, and American Pie 2.

The editor for Monster High was Warren Chadwick, who cut the films Jungle Warriors, Hollywood High Part II, Scared to Death, and Walking the Edge. 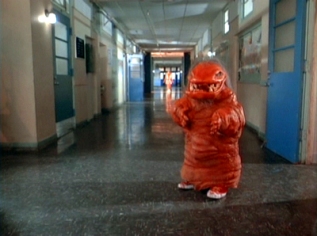 The reception to Monster High was generally negative: it currently holds a 35% audience aggregate score on Rotten Tomatoes, along with a 3.3 rating on IMDb.

This movie is far more comedy than it is horror, and fails in that endeavor in just about every way.  For example, most of the movie is accompanied by a narrator, who is sure to explain any and all of the cheesy jokes and exposition, despite the fact that everything is clearly laid out to start with. This isn’t just grating, but it drags most of the sequences out longer than they need to be.

The humor in the movie, for the most part, is what you would expect from a modern day Scary Movie sequel: vapid sex comedy and gross-out humor. There is also a bit of self-awareness of the genre’s tropes, but it is mostly buried underneath a mountain of boob, condom, and weed jokes.

The creative deaths that pop up throughout the film are about the only value it has, courtesy of its extensive class of monsters. This film offers just about every kind of monster you could imagine: aliens with ray guns, mummies, killer plants, an evil computer, zombies, etc, and the variety of deaths go along with them. It seems to me that the effects workers had an absolute ball coming up with the gimmicks and squibs, and they mostly look pretty impressive considering how cheaply the movie was made.

The thing that stood out the most to me about Monster High was the plot, which essentially turns into Space Jam in the last act. An evil alien creates an army of monsters to end the world, and the students at the ground zero high school challenge him to a basketball match to save the planet from destruction. Unfortunately, neither Michael Jordan nor Bugs Bunny make an appearance.

Overall, this movie isn’t good for much more than some vapid, mindless fun. Personally, it isn’t my cup of tea, but I can see how some people would get a kick out of it. The effects are generally impressive, as I mentioned before, but the writing and acting are just atrocious, enough so that I would generally advise avoiding it. That said, if you are into horror comedies that rely on boobs for viewership, this one might be up your alley. 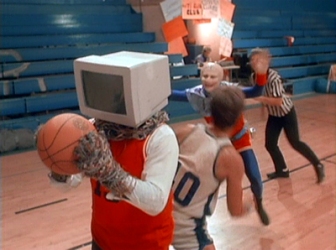 Tuscaloosa, AL isn’t a particularly big or interesting place. Unless you’re there for football, school, or the unimaginable combination of the two, there isn’t a whole lot to soak in. I would know, because I lived there for a while.

That said, there are a surprising number of used media stores in the area for how modest the population is. I’ve already covered the MovieStop chain quite a bit, which has a prominent location in Tuscaloosa. However, the real gems in the area are two sites of the small franchise Replays Gameware & DVDs, which you will seldom see outside of small towns and modest cities like Tuscaloosa. 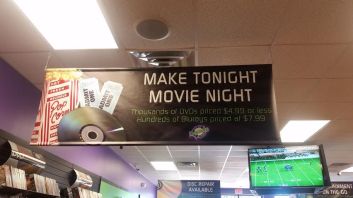 While the selection isn’t outstanding, these shops aren’t afraid to hold blowout sales to clear out their stock, particularly for their DVDs (as they are primarily vintage gaming shops).  If you catch them during one of those (as I did), the deals are very solid. There is also something to be said about the atmosphere at these shops: they are far less sterile than many of the larger buy/sell/trade chains, and hold on to the intimate and casual ambiance that a lot of people miss from the days of video rental. For people who are into that, Replays has never failed to deliver that for me.

Getting on to the actual haul, let’s start with the central Tuscaloosa location: 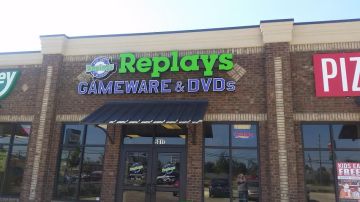 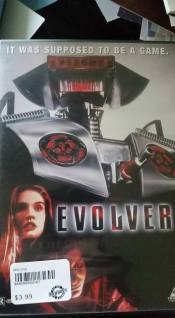 Holy shit! It’s my favorite William H. Macy-voiced killer robot: Evolver! I covered this particular flick as part of Killer Robot Week, but this is actually the first time I had come across a DVD copy of it. Of course, I had to pick it up. Why wouldn’t I? If you want to know more, go check out my earlier review of it. Or, better yet, just dig it up on Netflix without any primer. 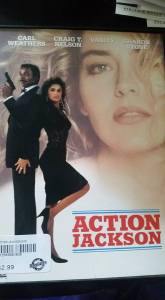 Action Jackson is a movie where Carl Weathers (Predator, Rocky, Arrested Development) plays a super-cop, which is all I need to know about it. Also, Vanity of Never Too Young To Die and The Last Dragon co-stars alongside him, in case I needed extra incentive to pick this up (I didn’t). This is another one of those movies that I have just never gotten around to, so when I spotted it on sale, I decided that it should come home with me. I have a feeling that if I throw that movie in my DVD player, I’ll have a mean stew going.

The Thing With Two Heads 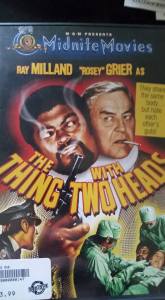 Gosh, where can I possibly start with this bizarre b-movie? It is about a racist white man whose (functioning) head is grafted onto a black guy, which results in a movie’s worth of hilarious, action-filled hi-jinks. Academy Award winner Ray Milland did this flick in 1972, the same year in which he featured prominently in the outlandish horror movie Frogs, which I covered here previously. I first heard about this flick when Stuart Gordon did a spotlight on it for Trailers From Hell, and it has been on my to-watch list ever since.  Keep your eyes peeled, because this sounds like a lock for me to cover at some point in the future.

While the Tuscaloosa location did yield me those three much-appreciated finds, the Northport location just outside of town really gave me some fuel for the bad movie fire: 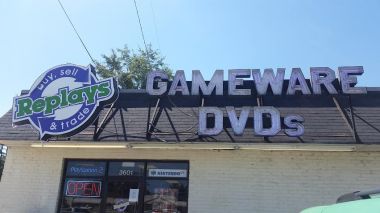 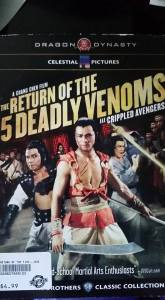 Martial Arts films definitely aren’t my strong suit, and my knowledge base is admittedly pretty lacking in this department. However, this is a flick that I heard about recently via The Cinema Snob, and I was a little surprised to see it with a DVD release at all given how obscure most of his picks are. I hear that this is actually a pretty decent action flick, but I may just cover it anyway for its cult appeal. 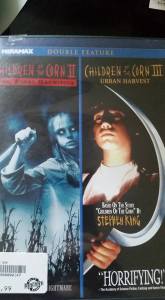 This is a franchise that I have no experience with outside of the original. However, I do know that people hate these two movies with a burning passion, and that I have never seen them. Thus, this was an obvious pickup for me. 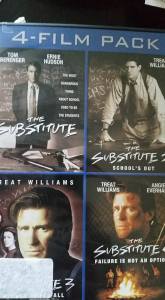 There are three sequels to The Substitute? And they all star the zombie-cop  Treat Williams? There is absolutely no way that these movies are good, and the fact that I had no idea they existed makes me absolutely giddy. I can’t wait to dig into these, and I hope they yield something worth covering here on the blog.

The original The Substitute was featured on the We Hate Movies podcast not too long ago, which made me give consideration to picking it up at some point. I vaguely remember seeing it as a kid, but it was really easy to get confused with The Principal, one of the finest films in the history of cinema. Regardless, I am baffled that this flick managed to spawn so many sequels, which has me deathly curious as to how the story continuity works between them. 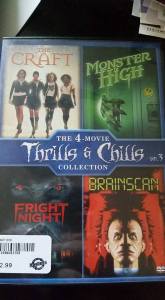 It is hard to resist the allure of a cheap compilation DVD. In this case, cult classics Fright Night and The Craft anchor a couple of lesser-known flicks that leech onto their sides like barnacles. The one that initially caught my eye was Brainscan, which was on my shortlist to cover back during Killer Robot Week. However, I have a hunch that Monster High is going to be the highlight of the bunch, because it sounds absolutely wretched, and holds an unenviable IMDB rating of 3.3.