The People Under the Stairs

Today’s feature is a cult classic from the filmography of the late Wes Craven: The People Under The Stairs.

The People Under The Stairs was written, directed, and produced by the late Wes Craven, who was behind such films as Scream, A Nightmare On Elm Street, The Last House On The Left, Shocker, The Hills Have Eyes, and Vampire In Brooklyn.

The cinematographer for the film was Sandi Sissel, who served as a second unit director of photography on such movies as Cellular, Daredevil, and Master & Commander: The Far Side Of The World.

The editor on The People Under The Stairs was James Coblentz, who also cut the films Final Destination and Species III, as well as a number of episodes of The X-Files.

The makeup effects team for The People Under The Stairs was made up of Greg Nicotero (Maniac Cop 3, Pick Me Up, DeepStar Six, From Beyond), Robert Kurtzman (Maniac Cop 3, It Follows, Tremors), Earl Ellis (Captain America, Star Trek: Enterprise), Michelle Bühler (Communion, Swordfish), Howard Berger (The Black Cat, The Faculty, Pumpkinhead, Ghoulies), and Mark Maitre (Night of the Creeps, The Cell).

Outside of Wes Craven, the producers on The People Under The Stairs were Stuart M. Besser (Scream, Scream 3, Need For Speed), Dixie Capp (Young Guns II), Shep Gordon (Cool As Ice, They Live), and Marianne Maddalena (Red Eye, Dracula 2000).

The musical score for the film was composed by Don Peake, who also did the music for the earlier Wes Craven film The Hills Have Eyes, as well as for the television series Knight Rider.

Eventual Academy Award winner Hillary Swank auditioned for the role of Roach in The People Under The Stairs, which was ultimately filled by Sean Whalen. At the time, Swank had only appeared in a handful of television series.

Noted film composer Graeme Revell (Sin City, Daredevil, Spawn, Tank Girl, Suicide Kings) put together a score for The People Under The Stairs that was rejected by the production, and replaced by the one composed by Don Peake. He still has a credit on the movie as a composer of “additional music.”

The concept for The People Under The Stairs was inspired by a real news story about children who were locked in their rooms by their parents, and were discovered during an investigation of a break-in. Craven was known for pulling horror plots out of headlines, which is also how he formulated the concept for A Nightmare On Elm Street.

The People Under The Stairs had a reported production budget of $6 million, and grossed just over $24 million in its lifetime domestic theatrical release.

The reception to The People Under The Stairs was mixed: it currently holds an IMDb rating of 6.3, alongside Rotten Tomatoes scores of 59% (critics) and 58% (audience). That said, it has become a bit of a cult classic among horror movie fans.

The parents in The People Under The Stairs, played by Wendy Robie and Everett McGill, are incredibly creepy, and they sell their abusive, evangelical, overbearing characters very well. Honestly, their couple is more terrifying than most movie monsters I have seen.  However, as with many Craven villains, they rapidly devolve into comic book hamminess, and lose their sense of menace when they start trotting around in full body leather wielding shotguns.

One of the most surprising things to note in The People Under The Stairs, however, is the fact that there is some really good child acting. That is quite a rarity for any movie, let alone a horror film.

This film has an impressively tense and slow-burning buildup in the first act, which is helped a bit by putting the audience in the innocent point of view of Fool, who is thrown out of his element very quickly. The eventual reveal of what is going on in the mysterious house is done slowly, which allows the uneasy atmosphere to build through the set design, acting, and music, rather than the writing revealing anything straight-out. However, once the situation is revealed, the atmosphere is quickly dissipated by a lot of hammy acting and action.

As far as negatives go, the attempts at humor really didn’t work for me in The People Under The Stairs, and felt a bit unnecessary and forced in an otherwise unfunny scenario. Some horror films lend themselves easily to humor, but a film about captive children, torture, and child abuse isn’t exactly a laugh mine like an Evil Dead movie can be.

Overall, I can definitely see how The People Under The Stairs has become a cult classic, but I can also see why a lot of people aren’t particularly fond of it. It definitely isn’t one of Wes Craven’s more noteworthy works, but it is still worth checking out for horror fans. It isn’t nearly as fun or violently goofy as Shocker, and certainly isn’t as intriguingly meta as New Nightmare, but The People Under The Stairs might be a more solid movie all around than either of those bordering Craven features. At the same time, I don’t think it is as memorable as either of those movies, which is definitely a weakness.

Welcome to the latest installment of the Bargain Bin(ge), where I cover used DVD stores from around the country and the various movies I have plundered from them. This past weekend, I took a trip down to New Orleans: one of the most unique and interesting cities in the United States. Of course, I managed to take some time to dig into a couple of local used media spots between enjoying the cajun food and the sights.

First up is an old haunt of mine from my college days at Tulane University: The Mushroom.

The Mushroom is sort of an all-purpose alternative interest center: part head shop, part record store, part eclectic emporium. It sits on the corner of Tulane University’s campus, on the second floor of a building that houses both a college bar and one of the most delicious crepe restaurants in the country. Of course, the Mushroom also boasts a significant used DVD section, which I have spent a lot of time digging in over the years.

The most distinctive aspect of The Mushroom, much like New Orleans itself, is the atmosphere. Just check out some of the art on the exterior walls: 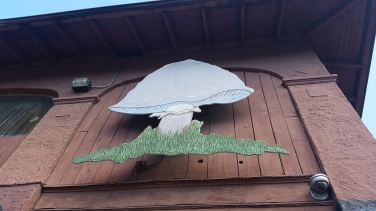 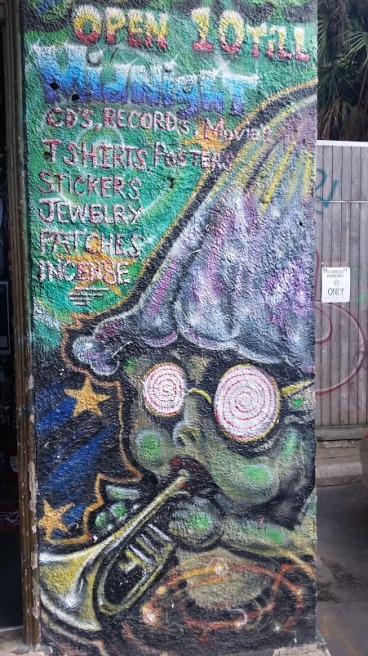 Did I mention it is also a head shop? In any case, I love the unique flair of the place, both on the inside and the outside. The DVD section is specifically surrounded by t-shirts branded with classic horror and sci-fi movies, which is a nice touch. I picked up a Godzilla shirt there a couple of years ago that I absolutely love, and I was tempted to dig through to find another one. Maybe next time. 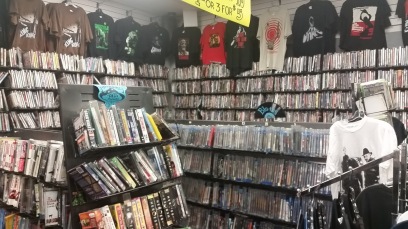 The DVD prices in The Mushroom could be a bit better. However, I came out with 5 dvds (6 movies) for about 15 dollars, which isn’t too bad. The biggest problem is that they usually know when they have something rare or obscure, and they mark them up accordingly. You aren’t going to find any steals here in general, but you will almost certainly find something interesting.

Shocker / The People Under The Stairs

So, on to the movies I picked up at The Mushroom. First, there is a Wes Craven double feature of “Shocker” and “The People Under The Stairs.” Neither of these are exactly considered highlights in Craven’s career, but they both have fan followings for sure. Also, I haven’t seen either of them, nor did I have copies of them previously. I recently missed a screening of “The People Under The Stairs” at Gateway Film Center, so I’m going to specifically look forward to giving that a watch.

The next find is a bit of a forgotten flick, mostly because of how overshadowed it was by a better film with a similar concept. Years before “Volcano” vs “Dante’s Peak” and “Armageddon” vs “Deep Impact,” there was “Top Gun” vs “Iron Eagle.” I think that this is the first time I have run across a DVD copy of this film, and this is another one I haven’t seen before. I might do a back to back of this and “Top Gun” as a sort of retrospective comparison. Speaking of which, I’ve been meaning to do that with “Catch-22” and “M.A.S.H” too. Keep your eyes peeled.

How To Make A Monster

Here is a movie I considered early on as a possibility for Killer Robot Week, but I knocked it out partially because I couldn’t find a copy. So, I was understandably pretty surprised to find a copy of it in the wild. “How To Make A Monster” is a television movie from 2001 that surprisingly features effects work from the legendary creature creator Stan Winston, who certainly had no business working on TV that late into his legendary career. I’ll be interested to see if there is some reason for his involvement, but I’ll save that for a proper review. What is more important to note is that this is a television movie from 2001 about a killer video game, so it is bound to have awful CGI and dated references to controversy over violence in video games. Sounds like a good time to me! The writer/director, George Huang, also did the movie “Swimming With Sharks,” which is basically “Entourage” without the central cast or comedic elements (so, better). It features Kevin Spacey as the intensely abusive and reprehensible super-agent character, and you can just feel how much Piven pulled his character of Gold from the performance. I haven’t seen it in a few years, but I liked it on the initial watch.

When it comes to sequels failing to live up to the potential of their concepts, “Predator 2” has to be towards the top of that list. Moving the stealthy alien hunter from the jungle into an urban environment sounds like a winner, but then again, so did the idea of combining Predators and Xenomorphs on screen. I haven’t seen this flick in years, but I don’t recall hating it when I saw it years ago. I was just…disappointed. I’ll be interested to see what this movie is like for me now, because it has been at least a decade since I last saw it.

Here a flick I don’t actually know anything about: “Virtual Assassin” or “CyberJack.” From what I can tell, it is a “Die Hard” knock-off with a sci-fi, high-tech twist. The director, Robert Lee, primarily works as an assistant director, and has been in the crew of such flicks as Uwe Boll’s masterpieces “House of the Dead” and “Alone in the Dark.” The film stars Michael Dudikoff, who is best known as Cannon’s “American Ninja.” He’s had one hell of a b-movie career, and his presence was enough to sell me on giving this thing a shot. 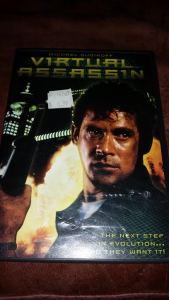