“Vampire’s Kiss” was written by Joseph Minion, who also wrote the screenplay for Martin Scorcese’s cult classic comedy “After Hours.” The director for “Vampire’s Kiss” was a fellow named Robert Bierman who was taking on his first directorial role on a feature film.

The cinematography for “Vampire’s Kiss” was provided by Stefan Czapsky, who would later work on a number of Tim Burton films (such as “Ed Wood” and “Batman Returns”), as well as the horror sequel “Child’s Play 2.”

The musical score for “Vampire’s Kiss” was composed by Colin Towns, who primarily did music for television shows. However, he provided scores for a couple of Stuart Gordon movies: “Daughter of Darkness” and “Space Truckers.”

The primary editor for “Vampire’s Kiss” was a man named Angus Newton, who has worked on television shows and movies like “Scandal,” “Dreamchild,” and “Foyle’s War.”

The production designer for “Vampire’s Kiss” was Christopher Nowak, who later worked on “The X-Files” and “Coming To America.”

The story of “Vampire’s Kiss” centers around an abusive and erratic publishing agent who slowly descends into madness, believing that he has been turned into a vampire during a one night stand.

Nicolas Cage’s performance in “Vampire’s Kiss” is notorious not only for his appearance, but also for his behind-the-scenes behavior. During one sequence, Cage actually eats a real cockroach, which was apparently both Cage’s idea and done based on his adamant insistence. He even insisted on the production using a real bat for the scene where he is bitten, until he was eventually talked down by the director. Cage also has said that he rehearsed in his hotel room constantly during his off-time. Better yet, he did so with the company of his cat, Lewis, whom he let live in the hotel room throughout filming, barring any attendants from making up the room. Whether due to Lewis or Cage’s recital performances, the hotel room was left in shambles by the time production wrapped.

Speaking of which, all of the property destruction caused by Cage in “Vampire’s Kiss” was real.  The production couldn’t afford fake glass or prop furniture, so all of the various objects that Cage destroys were absolutely genuine, and has to be torn apart by the OneTrueGod’s genuine wrath.

The recently cult following behind Nicolas Cage’s unique take on the method acting style often praises “Vampire’s Kiss” as one of the finest examples of Cage in his peak, ludicrous form. The fandom around his style has spawned a popular subreddit (r/OneTrueGod), as well as a meme developed from a “Vampire’s Kiss” screenshot. 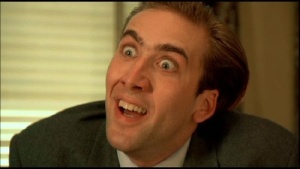 According to Nicolas Cage, the $40,000 he was paid for his performance in “Vampire’s Kiss” was spent on a 1967 Corvette Sting Ray that he still owns, which he refers to as ‘The Vampire’s Kiss,’ which is a pretty great nickname for a car.

The DVD director’s commentary for “Vampire’s Kiss” also features Nicolas Cage, who provides some fantastic insight into his personal outlook and mentality about the film. Here are a couple of memorable quotes:

“I cared more about this performance than any other in my career…(I wanted) to get it right.”

“Over the top is one of those things that doesn’t work with me, because I don’t believe there is such a thing.”

Before Nic Cage became formally attached to the picture, Judd Nelson (“Steel,” “The Boondock Saints II”) was cast to play the lead in “Vampire’s Kiss,” but backed out after receiving a better offer, likely for the William Lustig (“Maniac Cop 2,” “Maniac Cop 3”) film “Relentless.”

“Vampire’s Kiss” bears vague similarities to a couple of more highly acclaimed films: George Romero’s “Martin” and Roman Polanski’s “Fearless Vampire Killers.” “Martin,” much like “Vampire’s Kiss,” features a protagonist in a modern setting who believes himself to be a vampire, and suffers a very similar ending to the one portrayed in “Vampire’s Kiss.” However, that film is a pretty straight drama, with not much in the way of comedy. “Fearless Vampire Killers,” on the other hand, is a dark comedy centered around vampires, which more closely resembles to tone that Bierman was allegedly aiming for with “Vampire’s Kiss,” and is directly mentioned as an influence in his DVD commentary. The ultimate product of “Vampire’s Kiss” seems to exist in a limbo state between those two features, with a confusing tone that can’t seem to settle on which direction it wants to go in.

Because of the unclear tone and surreal aspects of “Vampire’s Kiss,” the marketing for the film clearly struggled to sell audiences on the film. Some of the posters and cover art that you will find make the film look like a traditional horror, whereas others make it appear to be a silly comedy.

“Vampire’s Kiss” mostly flew under the radar for it’s theatrical release, grossing less than $750,000 in a limited run on a $2 million budget. The reception that it did receive wasn’t positive, in spite of the cult status it has attained in recent years as a “good-bad” flick. It currently holds Rotten Tomatoes scores of 59% (critics) and 54% (audience), with an IMDb rating of 5.8.

From watching “Vampire’s Kiss,” you can tell that it was clearly a low budget production with an inexperienced crew, and thus has a very authentically amateur feel to it, which can sometimes work in a film’s favor (“The Texas Chain Saw Massacre,” for instance). Unfortunately, that isn’t particularly the case here.

One of the biggest problems with “Vampire’s Kiss” is a baffling lack of focus, like it was never completely worked out ahead of time by the director after he read the screenplay. The result is a meandering tone that never feels quite coherent, almost like it was directed steam-of-consciousness. It still isn’t completely clear what Bierman’s intention for the film was, and he isn’t quite able to elucidate it himself based on the director’s commentary. I would be interested to hear Joseph Minion’s thoughts on the film and what his vision was for the original screenplay. The only information I could find is that he wrote the screenplay in two weeks, that there were no rewrites, and that the only thing on screen that he didn’t write was Nic Cage’s infamous cockroach scene:

”The only thing that wasn’t in the script was Nick (Cage) eating a cockroach. That was his own contribution.”
– Joseph Minion on “Vampire’s Kiss”

The background of “Vampire’s Kiss” is almost as entertaining as the primary story itself. The production couldn’t afford extras, so a lot of the people in the background are either crew members, or, more frequently, are just real New Yorkers strolling by. This is particularly entertaining to watch during sequences where Cage is howling and flailing his way down the street. There are also a number of mimes that appear in the background of scenes, which were included for reasons that no one seems to remember.

Last but not least, “Vampire’s Kiss” both lives and dies by Nicolas Cage. The entire film orbits around his astoundingly strange performance, including exaggerated hand gestures, perplexing accents, sudden explosive outbursts, and borderline inhuman facial expressions. Whether someone likes this movie or not absolutely depends on their opinion of Nicolas Cage’s acting style, because the entire movie essentially functions as a showcase of the man at his most extreme limits.

Overall, I believe that “Vampire’s Kiss” has earned its reputation as a good-bad classic, and is the single greatest example of Nicolas Cage at his most bizarre zenith. I recommend checking this one out to just about anyone who enjoys bad movies or Nic Cage performances. Even for casual movie watchers, I at least insist that they check out some of the highlight compilations that are littered across YouTube, at least for the cultural knowledge.