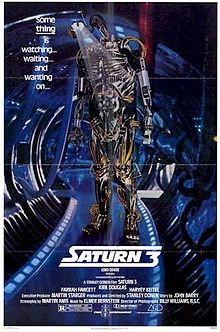 Continuing my current spotlight on the “Worst of the Best,” today’s feature is Stanley Donen’s 1980 science fiction flick Saturn 3.

The story for Saturn 3 is credited to John Barry, a production designer who worked on Star Wars, A Clockwork Orange, and Superman, and who was initially set to direct the film. The screenplay, however, was provided by acclaimed writer Martin Amis, and is to date his only listed screenplay credit on IMDb.

Saturn 3 was directed and produced by Stanley Donen, who is best known for memorable movies like Singin’ In The Rain, Charade, Funny Face, Seven Brides For Seven Brothers, and Bedazzled, but also closed out his career with a string of failures like Blame It On Rio, Lucky Lady, and Saturn 3.

The cinematographer for the movie was Billy Williams, whose career shooting credits include Gandhi, On Golden Pond, The Manhattan Project, and Voyage of the Damned.

The editor for Saturn 3 was Richard Marden, who cut movies like Hellraiser, Nightbreed, Blame It On Rio, and Sleuth, among many others.

Outside of director Stanley Donen, the producers for Saturn 3 were assistant director Eric Rattray, who was a producer on Labyrinth and an assistant director on Dr. Strangelove, and Martin Starger, whose credits include The Last Unicorn, Sophie’s Choice, Nashville, and The Muppet Movie.

The musical score for Saturn 3 was composed by Elmer Bernstein, who also provided music for movies like Wild Wild West, Slipstream (1989), My Left Foot, Spies Like Us, Leonard Part 6, Ghostbusters, Heavy Metal, Airplane!, and Animal House, among many others. However, very little of his original score was used thanks to significant re-edits and the change of director on the film.

The plot of Saturn 3 is summarized on IMDb as follows:

Two lovers stationed at a remote base in the asteroid fields of Saturn are intruded upon by a retentive technocrat from Earth and his charge: a malevolent 8-ft robot. Remember, in space no one can hear you scream.

Saturn 3 had a change of director part way through filming, when Stanley Donen, who was initially just a producer on the project, took over many directing duties, which led to first time director John Barry leaving the production. Barry tragically died not long afterwards in 1979, while working on The Empire Strikes Back.

Saturn 3 received three Golden Raspberry nominations in the first year of the award’s existence. The “Razzies” are now annually given out to the judged worst films and performances of a given year. Kirk Douglas and Farah Fawcett were both nominated for Worst Actor/Actress respectively, and the film as a whole was nominated for Worst Picture.

Currently, Saturn 3 holds an IMDb user rating of 5.0, alongside Rotten Tomatoes aggregate scores of 10% from critics and 31% from audiences. The film’s budget was reportedly cut early on, but it almost certainly failed to turn a profit with a $9 million total domestic gross.

First off, the dubbing work done over Kietel is beyond strange to me. The man has a distinct and instantly recognizable voice, so it seems bizarre that he would even be cast if there was an issue with his accent. The change in director part-way in might explain that to some degree, but Donen was already involved as a producer before taking on directing duties. Either way, it is impossible that a Brooklyn accent would be less distracting than an odd dubbing.

Kirk Douglas and Farah Fawcett, who are undoubtedly the core of this movie, couldn’t possibly have less chemistry between them. Personally, I’m shocked that both of them were cast, because the story essentially mandates a legitimate and believable level of compatibility between an older man and a younger woman, which just isn’t delivered here at all. Without that emotional center, the already flimsy story certainly doesn’t hold any water.

Speaking of which, the film is written almost entirely about anxieties over romantic age differences, with a thin veneer of science fiction on top. While that isn’t the worst idea I’ve ever heard, the result here just isn’t terribly interesting. Whereas Logan’s Run and Soylent Green successfully tapped into anxieties relating to age and aging, Saturn 3 manages to completely miss that mark, and fails to resonate at all as a result. The casting certainly contributed to this, but I don’t think the writing did them any favors either.

Roger Ebert was always at the top of his game when he wrote reviews for bad movies, and Saturn 3 was certainly no exception. His coverage of the movie nicely sums up one of its most glaring issues: the story and content is both astoundingly shallow.

The love triangle between Douglas, Fawcett and Keitel is so awkwardly and unbelievably handled that we are left in stunned indifference. The purpose of Keitel’s visit is left so unclear we can’t believe Douglas would accept it. The hostility of the robot is unexplained.
…
This movie is awesomely stupid, totally implausible from a scientific viewpoint, and a shameful waste of money. If Grade and Kastner intend to continue producing films with standards this low, I think they ought instead, in simple fairness, to simply give their money to filmmakers at random. The results couldn’t be worse.

Overall, Saturn 3 is a movie that had a potentially interesting vision behind it, but never quite got realized. It is mostly just a boring feature to sit through, but there is a peculiar sort of nostalgic value to sitting through it that helps fill in the void of conventional entertainment offered. Bad movie fans could certainly find something to enjoy here, but I don’t think it would hold much for general audiences.